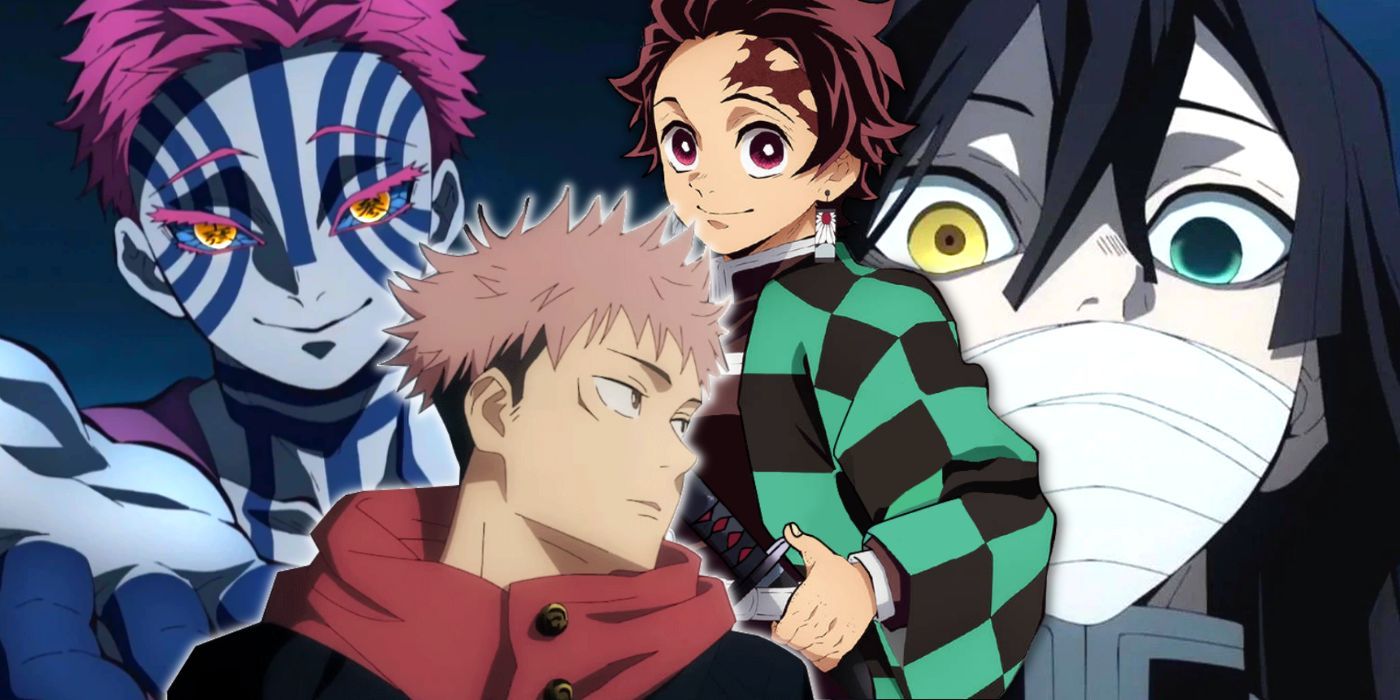 The worlds of Demon Slayer and Jujutsu Kaisen are so alike, yet so different. They’re both considered part of shonen anime’s new big three, each with their own unique appeal to the audience.

It’s always fun to speculate about how certain characters from one fictional world would fare in another. In this case, there are a few Demon Slayer characters who could become powerful jujutsu sorcerers. Whether they study at Jujutsu High or go on to become the most despicable curse users, these demons and slayers have what it takes to survive in the gritty, supernatural world of Jujutsu Kaisen.

10 Doma Would Be A Terrifying Curse User

Curse users are jujutsu sorcerers who use their powers with evil intent. If Doma were in the world of Jujutsu Kaisen, he’d be a notorious curse user. Back in the day, curse users made a side hustle out of bounty hunting and other sketchy requests from their clientele in the jujutsu underworld.

Since Doma is the Upper Rank Two in Muzan’s Twelve Kizuki, he’s a pretty strong demon and even runs his own cult. Curse user organizations, such as Q or the Time Vessel Association, are pretty common. Doma would probably start his cult-like organization and cause tons of problems for the jujutsu sorcerers.

9 Enmu Would Be Part Of A Curse User Organization

Given his bootlicking behavior towards Muzan, it’d make a lot of sense for Enmu to be a member of any evil faction from other anime- especially an organization of Curse Users. His personality is eerily similar to Haruta’s and Juzo’s. They’re all sadistic individuals who take childlike glee out of torturing humans.

Enmu would probably work with Kenjaku’s group. His cursed technique would be similar to his sleep-inducing Blood Demon Art. It would function similarly to Inumaki’s cursed speech, but it wouldn’t take as much of a toll on his body when he uses it.

Muichiro is Demon Slayer’s Wind Hashira. He comes off like a spacey airhead, but he’s a masterful combatant with a unique Breathing Style. Muichiro invented Mist Breathing all by himself.

If he were a sorcerer, Muichiro would at least be classified as a semi-grade one, and his innate technique would be similar to his Mist Breathing. The breathing style obscures his movements and tricks the opponent’s senses. It’d be a less jarring version of Todo’s Boogie Woogie if it were translated as a cursed technique.

7 Tengen Uzui Would Be The Second Flashiest Jujutsu Sorcerer

Unfortunately for Tengen, he wouldn’t be the flashiest guy in the world of Jujutsu Kaisen; that title goes to Satoru Gojo. However, he’d still have a pretty recognizable presence and may even be classified as a grade one sorcerer.

As the Sound Hashira, he’s one of the best slayers the Corps offers. He’s physically adept, an expert combatant, and can wield two heavy cleavers like they’re weightless during battle. Tengen would be a masterful cursed tool wielder in Jujutsu Kaisen and quickly cut down any cursed spirit who gets in his way.

6 Akaza Would Combine His Martial Arts Skills With Jujutsu Sorcery

He may be one of Demon Slayer’s most tragic and despised villains, but Akaza would make a pretty stellar jujutsu sorcerer. Like Yuji and Todo, he’d combine his martial arts background with jujutsu sorcery to make his innate techniques.

Akaza would be a semi-grade sorcerer and quickly master complicated techniques like the Black Flash. Above all else, Akaza desires to become stronger — his very existence depends on it. Cursed energy runs off of negative energy, and Akaza certainly has enough of it to channel into powerful attacks.

5 Tanjiro Would Be A Grade-Two Sorcerer

Tanjiro has what it takes to get by as a sorcerer. However, he’d probably have a hard time coping with the fact that he needs to be decisive when killing cursed spirits. In the world of Jujutsu Kaisen, sorcerers can’t hold the hand of a cursed spirit and weep by their side after beating them.

Tanjiro would be a grade-two sorcerer and at least be able to master basic cursed techniques. If he gets good enough, he might even be able to create an innate technique like Todo. It’d probably resemble his Sun Breathing.

The blazing Flame Hashira would fare pretty well in the world of jujutsu sorcery, too. He’d quickly rise through the ranks and become a grade one sorcerer, like Todo or Nanami. His techniques would resemble his Flame Breathing, and it wouldn’t be surprising if his Domain Expansion somehow engulfs his opponents in flames.

Rengoku would probably make a name for himself in the jujutsu community and become pretty well respected amongst his fellow sorcerers, similar to how he’s highly revered by other members of the Demon Slayer Corps.

Shinobu is the Corps’ Insect Hashira, and she’s an expert in medicinals, too. She has a custom nichirin blade that injects the demons with poison to kill them slowly.

While there currently isn’t any known substance that can kill a cursed spirit, Shinobu would still fare well in the jujutsu world. In fact, it wouldn’t be a stretch to argue that she’d be a semi-grade one like Toge Inumaki and Noritoshi Kamo. She’d be a master of cursed tools like Maki and could wield a sword like Miwa does. Since she has a lot of negative energy, she could channel it into something productive, like knocking out a few cursed spirits.

2 Giyu Tomioka Would Be A Grade-One Sorcerer

Giyu is the Water Hashira, and he’s one of the strongest members of the elusive nine. He’s taken out some of the most formidable demons like he was just running a few errands, so there’s no question he’d thrive in the jujutsu world, too.

He’d be classified as a grade-one, along with the likes of Nanami, Mei Mei, and Todo. His cursed techniques would be similar to his Water Breathing. If he creates a Domain Expansion, it would resemble his Eleventh Form: Dead Calm and nullify his opponents once it’s unleashed.

1 Obanai Can Channel His Negative Emotions Into Cursed Energy

Obanai is the Serpent Hashira. He’s notoriously harsh and fiercely adheres to the laws of the Corps. He might be physically weak, but he stood toe-to-toe against Muzan Kibutsuji, proving his strengths as a slayer. He’d also be an impressive jujutsu sorcerer.

After Obanai awakened his Demon Slayer Mark during the final fight, he could see into the Transparent World. If he were in Jujutsu Kaisen, his Domain Expansion would probably be similar, allowing him to perceive all of his opponent’s weak spots as if he saw right through them. Plus, jujutsu sorcery would give Obanai an outlet to channel all of his negative emotions into a healthy right hook on a cursed spirit.