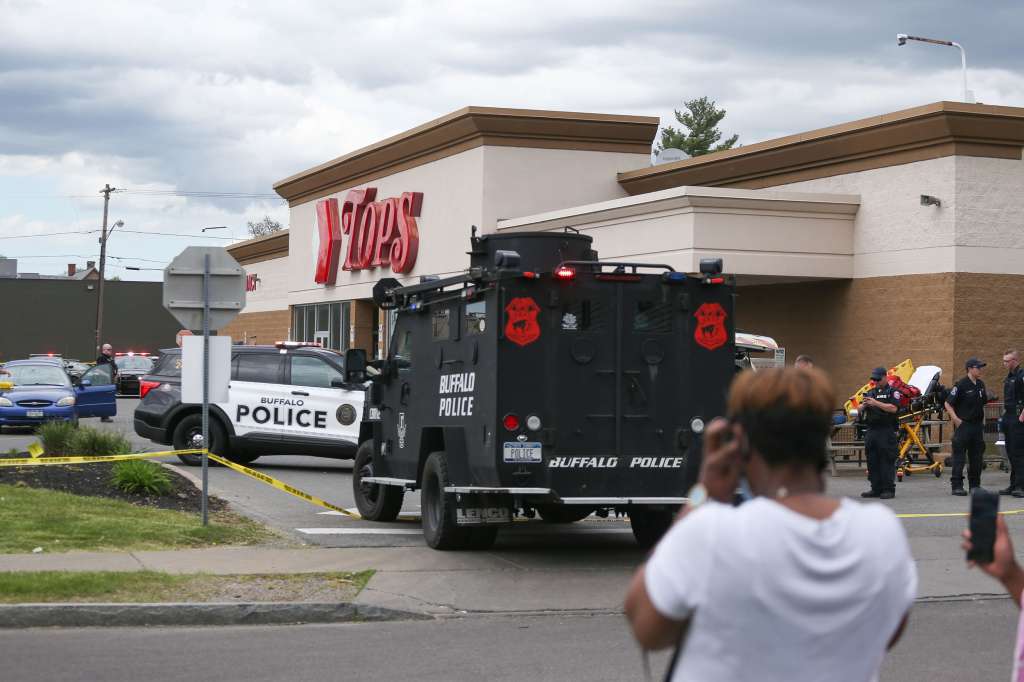 (CNN) — Ten people were killed in a racially motivated mass shooting at a supermarket in Buffalo on Saturday by a suspect in tactical gear who was livestreaming the attack, law enforcement officials said during a news conference.

The suspect, a White male, is in custody in the shooting, which occurred Saturday afternoon at a Tops Friendly Markets store.

Thirteen were shot in the attack and 10 have died. Of those shot, 11 were Black, and two were White, officials said.

Saturday’s massacre in Buffalo is the latest high-profile mass shooting in which authorities have said the suspect was motivated by hate, including attacks at a Walmart in El Paso, Texas; the Tree of Life Synagogue in Pittsburgh; Emanuel African Methodist Episcopal church in Charleston and the Pulse nightclub in Orlando.

The shooting is being investigated as a hate crime and the FBI is assisting, said Stephen Belongia, special agent in charge of the FBI Buffalo field office, at the news conference.

Buffalo Police Commissioner Joseph Gramaglia identified the shooter as an 18-year-old White male who is not from the Buffalo area but “from hours away.”

The suspect drove to Buffalo to the Tops market heavily armed, wearing tactical gear, and had a camera where he was livestreaming what he was doing, Gramaglia said.

‘This is our worst update’

CNN has obtained a portion of the livestream that is taken from the point of view of the shooter as he’s driving into the supermarket’s parking lot. The shooter, who is seen in the rear-view mirror wearing a helmet is heard saying, “Just got to go for it” before he pulls into the front of the store.

In the video, store patrons can be seen walking through the parking lot as the suspect drives up.

He then walked into the market and began shooting at customers in the store, Gramaglia said.

A supermarket security guard, a retired Buffalo Police officer, “fired multiple shots at the suspect,” but the suspect’s tactical gear protected him from the officer’s shots, Gramaglia said.

The suspect fatally shot the security officer and continued going through the supermarket, working toward the front of the store, where he encountered Buffalo police officers.

The suspect put his gun to his own neck, at which point two Buffalo officers talked him into dropping his gun and then took off some of his tactical gear and surrendered to police, officials said. Police arrested the suspect and transported him to Buffalo police headquarters.

“We appreciate the quick response by local law enforcement and are providing all available resources to assist authorities in the ongoing investigation,” the statement said.

Twitch, the popular live streaming platform best known for gaming, confirmed Saturday that the suspect had used its platform to stream a live broadcast during the attack. The suspect has been “indefinitely suspended” from the platform. A spokesperson for Twitch said that the company removed the livestream less than two minutes after the violence started.

Experts consider easy access to guns a root cause of the violence, and open-carry states lower the barrier for people to own and carry guns in public. But the spike in violence since summer 2020 has been general, across cities and states with lax and strict gun laws, with progressive and conservative prosecutors, as well as Republican and Democratic mayors and governors.

Among other recent attacks that authorities say were motivated by hate:

— In August 2019, police say a man killed 22 people and injured nearly two dozen more in a mass shooting at a Walmart store in El Paso, Texas.

The rampage was the deadliest attack on Latinos in modern US history.

Patrick Crusius was accused of killing and harming the victims “because of the actual and perceived national origin of any person,” the indictment states. He pleaded not guilty and is yet to stand trial.

— In October 2018, 11 worshippers were killed at the Tree of Life Synagogue.

Federal prosecutors filed hate crime charges against Robert Bowers, claiming he used anti-Semitic slurs and criticized a Jewish group on a social media site in the days leading up to the shooting.

Bowers in 2019 pleaded not guilty. He is yet to be tried.

Federal prosecutors said will seek the death penalty on charges that include obstruction of free exercise of religious beliefs resulting in death, use and discharge of a firearm to commit murder and possession of a firearm during a violent crime.

— In June 2016, an American-born man who’d pledged allegiance to ISIS gunned down 49 people at a gay nightclub in Orlando.

The gunman, Omar Mateen, 29, of Fort Pierce, Florida, carried an assault rifle and a pistol into the packed Pulse club about 2 a.m. on June 12, 2016, and started shooting, killing 49 people, officials said.

Mateen, who died in a shootout with police the day of the massacre, was interviewed by the FBI in 2013 and 2014 but was not found to be a threat, the FBI said.

— In August 2012, another place of worship was the scene of mass shooting. A gunman opened fire in a gurdwara in Oak Creek, Wisconsin, during prayer services, killing six and wounding four. Wade Michael Page died of a self-inflicted wound, the FBI said.

Then-Attorney General Eric Holder called the attack “an act of terrorism, an act of hatred, a hate crime.”

According to a man who described himself as an old Army buddy of Page’s, the attacker talked about “racial holy war” when they served together in the 1990s.