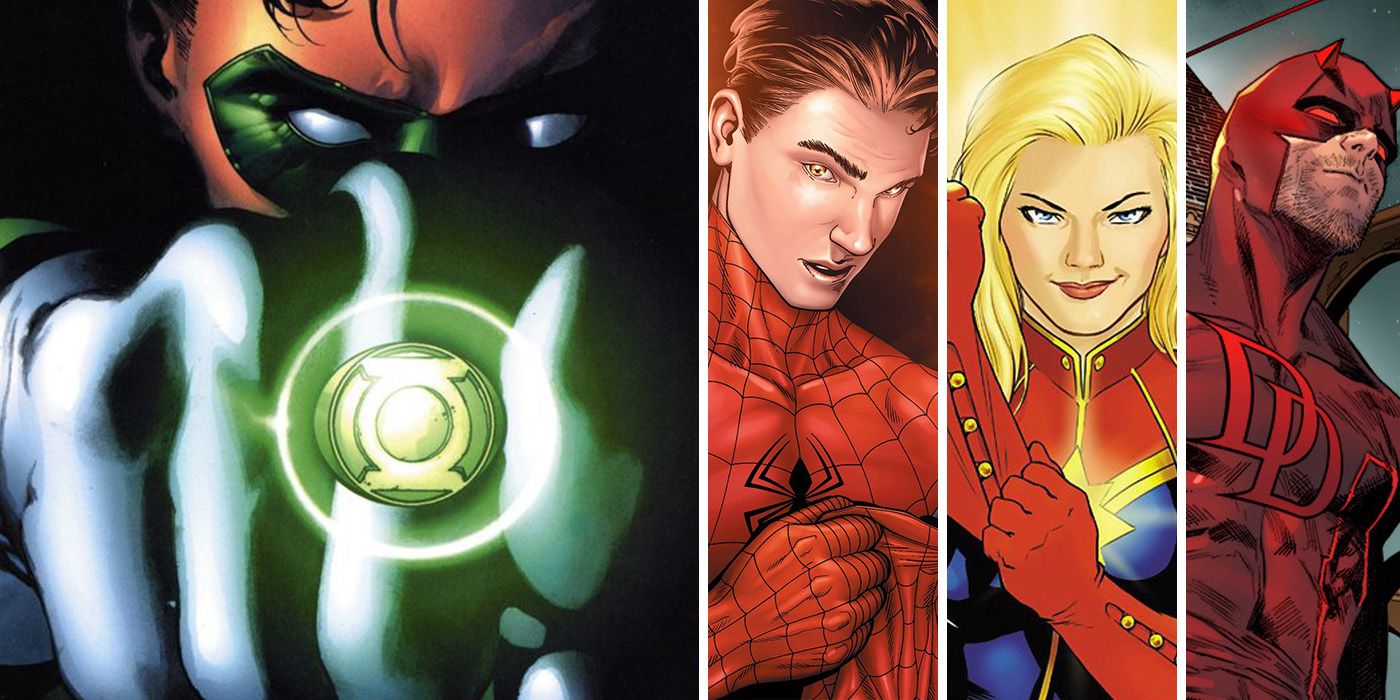 A Green Lantern’s power ring is considered one of the most powerful weapons in the DC Comics universe, but it’s a weapon that depends heavily on the user. The wearer uses their own willpower to use the ring, creating physical constructs of anything they can imagine.

In Green Lantern: Rebirth, Green Arrow struggled to produce one arrow from the ring, while those chosen to be Lanterns, like Hal Jordan or Kyle Rayner, can create incredibly detailed and powerful constructs. Many DC characters have worn power rings, but who would be chosen if a Green Lantern ring entered the Marvel Comics universe? Those worthy would need to be resilient and possess the ability to overcome great fear.

The Green Lantern rings select recipients based on their courage and ability to overcome great fear. Hal Jordan acts like he’s fearless, Kyle Rayner sees the best in people, and John Stewart risks his life to protect his teammates. Steve Rogers possesses all the best qualities of the best Green Lanterns and more, making him more than worthy of a power ring.

Steve has already proven himself worthy of wielding one of Marvel’s most powerful weapons, Mjolnir, in What If…? Age of Apocalypse and Fear Itself #7, so why not a Green Lantern power ring? Captain America is all about freedom and justice, so the Marvel universe’s space sector 2814 couldn’t be in better hands.

Peter Parker is an amazing superhero because of the sense of power and responsibility instilled in him by his Uncle Ben and Aunt May, but he’s remained a hero with an honest sense of right and wrong thanks to those closest to him. Mary Jane Watson has always been Peter’s most powerful, non-superpowered ally.

Spider-Man has saved MJ’s life countless times, but she’s far from a damsel in distress. MJ has faced villains like Venom and Red Goblin and walked away. She fought alongside Peter during “Spider-Island” and even donned the Iron Spider suit to help Peter battle Regent. She gets scared, but she always challenges those fears if lives are at stake.

Natasha Romanov first appeared in Tales of Suspense #52 in 1964 as the dubious Black Widow. She would later join the Avengers, and despite being one of the weakest heroes on the team, Natasha proved an invaluable ally thanks to her skills as a martial artist, spy, and leader.

Natasha has no superpowers, yet she often fights shoulder-to-shoulder with some of Marvel’s most powerful heroes in events like Civil War and Spider-Man’s “Ends of the Earth.” She’s courageous and also confident in her teammates, which are traits she’d need to have to be a Green Lantern fighting in a corps.

7 Captain Marvel Would Be Unstoppable With A GL Ring

Carol Danvers is one of the most powerful heroes in the Marvel Comics universe. She can fly, has super strength, and can shoot energy blasts from her hands. By all accounts, she doesn’t need the power of a Green Lantern ring, but she would be worthy of it nonetheless. With that added power, the villains of DC Comics wouldn’t stand a chance.

Carol is determined, confident, and willing to stand her ground for what she believes in. Like Hal Jordan, she butts heads with fellow superheroes, best exemplified in the Civil War II event when she squared off against Iron Man. Similarly to Jordan, Carol led a squad of fighter pilots during the 2015 Secret Wars event.

6 Magneto Is Stubborn But Resilient

Erik Lensherr and Charles Xavier are usually at odds with one another when it comes to mutant freedom vs. mutant superiority. Magneto has often been portrayed as the villain, leading the Brotherhood of Mutants against all humankind, but many comic stories like Kieron Gillen’s Uncanny X-Men or House/Powers of X depict Magneto as a force for good, who works with Xavier.

RELATED: 10 Ways Marvel Had Made Magneto Better Over The Years

Magneto has certainly been one of Marvel’s greatest villains, but he’s also been an incredibly powerful ally against even more dangerous villains like Apocalypse. His methods are often more violent or unjust, but Magneto’s resilience would make him worthy of a Green Lantern ring. However, how long he’d be able to hold onto that ring is another matter entirely.

5 Cyclops Fights For What He Believes In

Young Scott Summers was raised by Professor Xavier to fight for mutant rights and freedom. As he grew older and the tragedies piled up, Scott’s worldview shifted, and he began acting more like Magneto than Xavier. This character shift was examined in the All-New X-Men series by Brian Michael Bendis when a young Cyclops met the present-day Cyclops.

Regardless of the mistakes Scott has made, he has tremendous willpower. He’s not always heroic, but if Sinestro can obtain a Green Lantern ring, so can Cyclops. Scott has risked it all in stories like Avengers vs. X-Men and House of X and has proven he would make a fine leader in the Green Lantern Corps.

4 Doctor Doom Would Rule His Sector As Sinestro Ruled His

Sinestro was once considered “the greatest Green Lantern of all.” It was a title he proudly accepted after keeping his space sector safe. Unfortunately for the residents of sector 1417, Sinestro’s idea of “safety” meant little freedom. Sinestro became a dictator in his sector, abusing his power and controlling others. Despite his actions, he was once a person worthy of a Green Lantern ring. Doctor Doom, a Marvel villain who has ruled his homeland of Latveria in much the same way as Sinestro ruled his sector, could also be worthy of a GL power ring. Doom would use the ring’s power to protect his home, but he’d undoubtedly abuse that godlike power as he has in previous Marvel Secret Wars events.

3 Daredevil Is The Man Without Fear

Daredevil is perhaps the most famous street-level hero in the Marvel universe. Matt Murdock grew up in Hell’s Kitchen and saw the worst of mankind when the Kingpin had his father killed. After the accident that blinded him gave him superpowers, Matt dedicated himself to protecting Hell’s Kitchen.

The Kitchen is Murdock’s home in the same way Coast City is Hal Jordan’s. Both men would give their lives to protect their cities, and both draw power and inspiration from those they protect. Daredevil may be a street-level hero, but he’s battled some of the strongest Marvel characters… and won. A worthy Green Lantern shows no fear when battling a more powerful force, something Daredevil would excel at.

2 The Human Torch Is Headstrong Like Hal Jordan & Guy Gardner

Johnny Storm and Guy Gardner would not get along because, unfortunately, they have too much in common. Johnny is the loudest guy in the room, just like Guy, but if Guy can become a Green Lantern, then so can Johnny. Guy considers the Green Lantern Corps his family, willing to risk his life to preserve them. Johnny would be the perfect candidate for the corps considering what he does for his own fantastic family.

RELATED: 10 Comic Book Characters Who Were Forced To Grow Up Too Soon

The Human Torch has battled powerful foes like Doctor Doom and even allies like Spider-Man during the “Spider-Man: Worldwide” era. He’s a hothead (literally), but one who shows no fear, only confidence, in the face of danger – just like Guy or Hal Jordan.

The Green Lantern power rings are fueled by the collective willpower of the universe, but it takes a strong will of the individual to utilize it properly. There may be no other Marvel character with a stronger will than Peter Parker’s. Many of Spider-Man’s greatest stories involve Peter battling a seemingly unstoppable opponents and overcoming the odds.

He managed to slow down the Juggernaut in “Nothing Can Stop The Juggernaut,” and he freed himself in the Master Planner’s underground lair in Amazing Spider-Man #33’s “If This Be My Destiny.” Peter would be one of the first people chosen for the GL Corps thanks to his resilience and dedication to others.

Did People Really Miss The Actual ‘White Lotus’ Twist This…