10 Musicians Who Appeared As Themselves In TV Shows 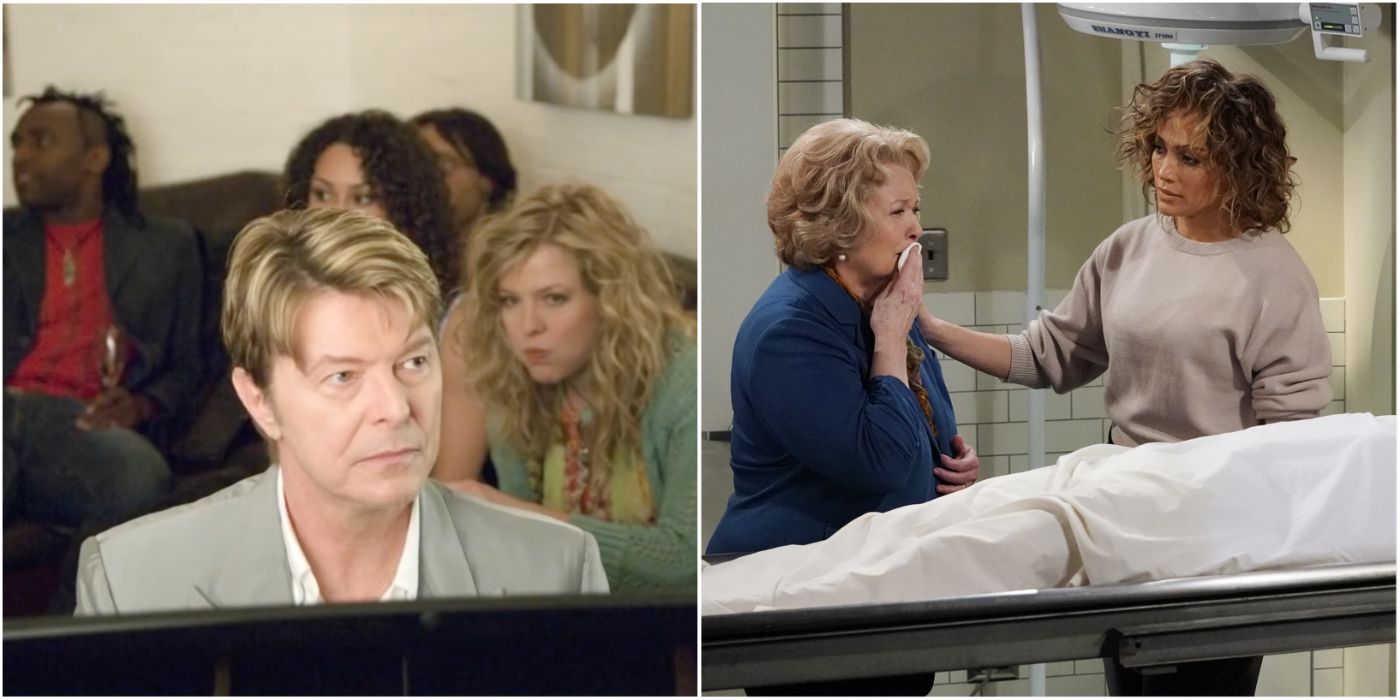 It has long been a natural progression for many musicians to transition over to acting at some point in their careers. Some musicians make the jump to acting and never look back, while others juggle both careers simultaneously. Many actors even do the same and begin careers in music.

Plenty of musicians have appeared in television shows over the years, but some appear as themselves rather than acting as different characters. For these self-appearances to have their desired effect on the audience, the musician needs to be well-known and the cameo should feel natural to the storyline, rather than shoehorned in.

Jennifer Lopez is known as an iconic singer, but she is also an established actress and has many movie and television roles to her name. Most of Lopez’s television appearances have been as an actress, except for one appearance where she played herself.

Jennifer Lopez appeared in multiple episodes of Will & Grace. She is introduced when she mistakes Karen for a bathroom attendant, but later returns to perform at Karen’s wedding reception. In a true meta moment, Lopez even makes another appearance in 2018 as her Shades Of Blue character Harlee Santos.

9 Snoop Dogg Had A Brief Cameo In Mythic Quest

Snoop Dogg is another huge music star who has appeared in a whole host of movies and television shows. Among his multiple television appearances, he appeared in two episodes of Empire and one of Mythic Quest, which is titled “Breaking Brad.”

Headed by Always Sunny In Philadelphia‘s Rob McElhenney as Ian Grimm, Mythic Quest: Raven’s Banquet follows the antics and ideas behind a fictional video game studio. “Breaking Brad” features a brief cameo of Snoop Dogg talking to Ian, and the fantastic end credits was accompanied by Snoop Dogg’s “What U Talkin’ Bout.”

New Girl had some terrific cameo appearances from established actors over the years, but Prince appearing as himself in the episode titled “Prince” is undoubtedly the most iconic. “Prince” sees Cece and Jess invited to a party hosted by Prince while Jess and Nick were having problems declaring their love for one another.

Prince ends up coaching Jess and gives her advice. The pair even end up singing “Fallinlove2nite” together. Consequently, “Prince” was a very well-received episode of New Girl.

In 2009, Adele appeared in an episode of Ugly Betty and sang “Right As Rain” from her debut album 19. The episode “In The Stars” received positive reviews for this cameo inclusion, even though this was right at the beginning of Adele’s fame and popularity.

In the episode, Adele follows up her funny dialogue with a stellar performance. Since “In The Stars,” Adele has been hugely successful and is now considered a musical megastar. The show itself may have received mixed reviews over the years, but this episode and Adele’s cameo are considered among the best Ugly Betty moments.

6 Donny Osmond Hosted Pyramid In An Episode Of Friends

Donny Osmond is an American singer who’s known for huge hits, both as a solo artist and as a part of the Osmonds. He has also had many acting and game show-hosting gigs, and a combination of the two saw him appear in an episode of Friends in 2004.

“The One Where The Stripper Cries” is often remembered for Danny DeVito’s hilarious performance, but another of the episode’s plot points sees Joey on the game show Pyramid. Donny Osmond is hosting the show, with Joey’s classicly funny antics producing multiple memorable moments.

5 Kanye West Had A Brief Cameo In Entourage

With the main premise of the television series Entourage being about a budding actor in the world of fame and fortune, it is only natural that the series has had a stacked roster of celebrity appearances. In the season 4 episode “No Cannes Do,” Turtle somehow gets the boys on Kanye West’s plane to the Cannes Film Festival.

It is a short and sweet cameo for Kanye, and he jokes about being the pilot for their journey. Entourage had plenty of other musical stars appear on the show, ranging from Bono to Christina Aguilera.

4 Britney Spears Appeared In A Britney-Centric Episode Of Glee

Famous singer Britney Spears has appeared in multiple television shows over the years, including roles in How I Met Your Mother and Will & Grace. She has also appeared as herself on several occasions, such as in Jane the Virgin and Sabrina, The Teenage Witch.

Glee is another show that saw Britney appear as herself in the episode titled “Britney/Brittany.” The episode sees ‘Britney fever’ hit the school, which the Glee Club were desperate to join in on. Brittany, played by Heather Morris, has hallucinations while at the dentist. Britney Spears essentially appears in Brittany’s dreams, but Spears’ influence throughout the episode is huge.

Created by Tina Fey, 30 Rock was a beloved sitcom throughout its seven-season existence. The show followed Fey’s Liz Lemon, the head writer of a sketch comedy series. 30 Rock looks into her life and the general goings-on behind the scenes.

In terms of impressive cameos the show managed to get, the episode “Kidney Now!” stood out. This episode sees multiple well-known musicians appear as themselves, singing in a charity benefit to try to find a kidney donor for Jack’s father, Milton. Cyndi Lauper, Adam Levine, the Beastie Boys, Elvis Costello, and several others take to the stage in this memorable episode.

Extras was a British sitcom created by Ricky Gervais and Stephen Merchant that ran for two seasons in 2005 and 2006. Extras followed Ricky Gervais’ Andy Millman, a disgruntled extra who just wanted to be a successful actor. The show saw multiple cameos from famous actors appearing as themselves, including the likes of Patrick Stewart, Ben Stiller, and a young Daniel Radcliffe.

Musicians also appeared in the show, with David Bowie being one of the most notable. The iconic musical legend meets Andy, and immediately proceeds to mock him with an improvised song.

Modern Family pulled off numerous celebrity cameos over the course of its eleven-season existence, and Martin’s was certainly memorable. In “Brushes with Celebrity,” Ty Burrell’s Phil shows his musical hero Chris Martin around a house until Phil suddenly has to be rushed to hospital. Martin goes to the hospital with Phil and ends up being an entertaining distraction. It is a hilarious cameo that ends with the Coldplay frontman singing a song for Phil.

Marcos to serve as agriculture chief amid food crisis fears