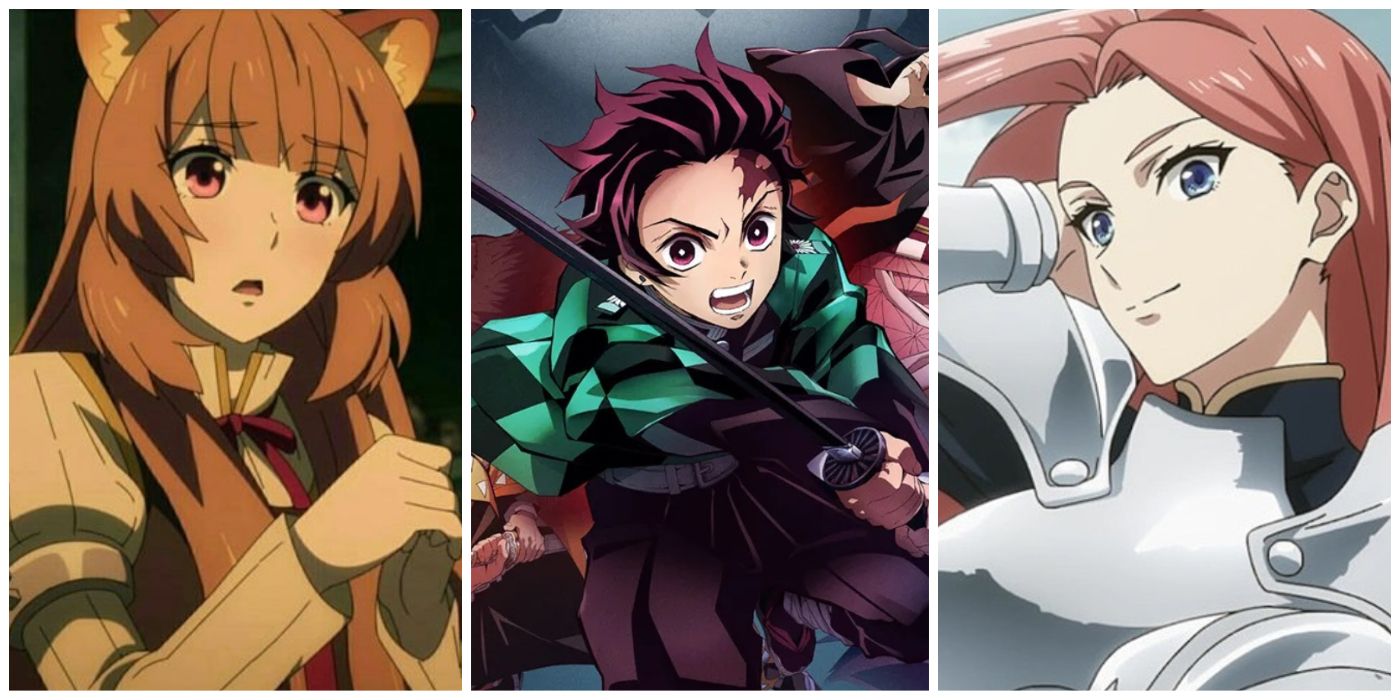 Demon Slayer is a hit shonen fantasy series taking place in Taisho-era Japan on the eve of World War I, where flesh-eating demons stalk the night and prey on humanity. Only sword-slinging demon slayers have what it takes to hunt and destroy these demons, and it’s a tough job, to say the least. Not everyone is ready for a career like this.

If the Hashira need more help fighting those demons, they can recruit new demon slayers from other anime, including other fantasy series such as The Rising of the Shield Hero. Plenty of Shield Hero‘s main characters could feasibly be re-trained to wield nichirin swords and exterminate demons all over Japan. They might even be ready to take on the Twelve Demon Moons if they know what they’re doing.

10 Naofumi Iwatani Is Used To Fighting Foes Stronger Than Him

It’s true that Naofumi Iwatani is the Shield Hero, a defensive character, but he could be trained to use nichirin swords and become a defense-oriented demon slayer, given the chance. Plenty of fictional warriors use both a sword and shield, and Naofumi could do the same when hunting demons.

Those shields can easily keep demons away from Naofumi or innocent bystanders, and Naofumi might also use them to block a demon’s escape. As a bonus, Naofumi is used to fighting as a resourceful, cautious underdog, and that would serve him well as a demon slayer.

9 Raphtalia Is Good With A Sword

Naofumi’s demi-human party member Raphtalia is already used to fighting with swords, and she has slain hundreds of monsters and villains with her blade. She is a veteran of several Waves, and in her eyes, the demons of Demon Slayer are simply a nighttime-only Wave.

Raphtalia may be reckless at times, but her skills are for real, and she knows how to handle foes much bigger or stronger than she is. Raphtalia would gladly agree to more training so she can clear entire waves of demons in Japan and protect the peace there. There are still many people who need her help.

Naofumi isn’t the only Cardinal Hero who was iskeai’d to this world to fight off the Waves. There’s also the official Sword Hero, a dark-haired fellow named Ren Amaki, who is already Melromarc’s version of a Hashira. He may be a bit foolish at times, but there’s no denying his prowess with a sword.

Just like Raphtalia, Ren knows how to fight off dozens of monsters and creatures with nothing but his sword, and this experience would serve him well if he got transferred to the Demon Slayer world. He wouldn’t mind joining Tanjiro’s party, either.

Itsuki is the Bow Hero, making him roughly similar to a Ranger in Dungeons & Dragons. Itsuki had a harsh attitude toward his party member Rishia Ivyred, but if the demon slayer corps fixed that attitude of his, he would make a fine demon slayer who can take down demons from afar.

Most demon slayers fight up close, but Itsuki could do some good if he had a good bow and some arrowheads forged from sun-soaked ores or dipped in wisteria poison. Given how few ranged attacks demons typically have, this fighting style would give Itsuki a huge advantage while hunting demonkind.

6 Filo Can Ambush Demons From The Air

At first, it seems like the petite, angel-like Filo isn’t ready to take on powerful demons, especially the Demon Moons, but looks aren’t everything. Filo may be a goofy kid, but she is also a powerful fighter and the future Filolial queen, complete with the ability to morph into her true avian form and back again.

Filo is a tough and tenacious fighter who can use her beak, talons, and wing magic to demolish her foes, and she is much quicker than her large bird form would suggest. As a bonus, Filo could have metal claws forged from sun-soaked ores affixed to her talons for combat against waves of demons.

The elderly Elrasla Grilaroc is much more capable than she looks. She is a melee fighter with many years of practice and experience backing her up, and she even took part in a few of the Waves, fighting hard to defend her home village from monsters. Naofumi soon learned to respect what Elrasla is capable of.

In a limited capacity, Elrasla could volunteer as a reserve demon slayer and train with not a sword, but nichirin swords or even brass knuckles to suit her martial arts fighting style. Demons would see a frail old lady right before Elrasla tears them apart in close-quarters combat.

In the manga and novels of Shield Hero, the story goes into greater detail regarding supporting characters such as Eclair Seaetto, who is an ally of Naofumi. Even if Ren Amaki is the Sword Hero, he’s not actually the series’ best swordfighter. That distinction belongs to Eclair instead.

In Shield Hero lore, Eclair repeatedly demonstrated her superior technique to Ren, and if Ren could do well against demons, then that goes double for Eclair. She also has a more mature and balanced attitude when compared to Ren, Itsuki, or Motoyasu the Spear Hero.

Despite being an arrogant and dishonest princess, Malty could do some good as a demon hunter if she found herself in the Demon Slayer world. There, Malty could start over as a proper adventurer and learn some humility as a support mage for the demon slayer corps.

Malty has no good reason to betray anyone in this new setting, so she can focus on the mission instead. With her formidable fire and wind magic, Malty could easily distract or injure even the strongest demons so her sword-wielding allies could finish the job.

2 Princess Melty Would Be Another Great Support Mage

Princess Malty’s younger sister, Melty, would also make for a potent support mage in the never-ending battle against demonkind in Taisho-era Japan. Like her sister, Melty is skilled with magic and is a battle veteran, with Melty using water-based magic instead of fire and wind spells.

Melty is also nicer and easier to get along with than Malty, even if she is a tsundere, so she would be warmly welcomed into the demon slayer corps. She may be a princess, but Melty isn’t afraid to get her hands dirty and support other demon slayers in battle.

The Vassal Weapon hero named L’Arc Berg is a powerful fighter who hails from a totally different world than Naofumi. L’Arc is the Scythe hero, and he’s powerful enough to take on Naofumi’s entire party and fight them on even terms. And he’s even stronger if Therese backs him up with her jewel magic.

L’Arc is more than a little used to fighting enemy soldiers and monsters with his scythe, and his skills are vast. It’s easy to imagine him trading that scythe for a nichirin blade that would act as the executioner’s blade for more than a few Demon Slayer bad guys.

Terrifying video shows student Danny Santulli, 19, ‘being dropped on head’ in brutal frat hazing that has left him BLIND