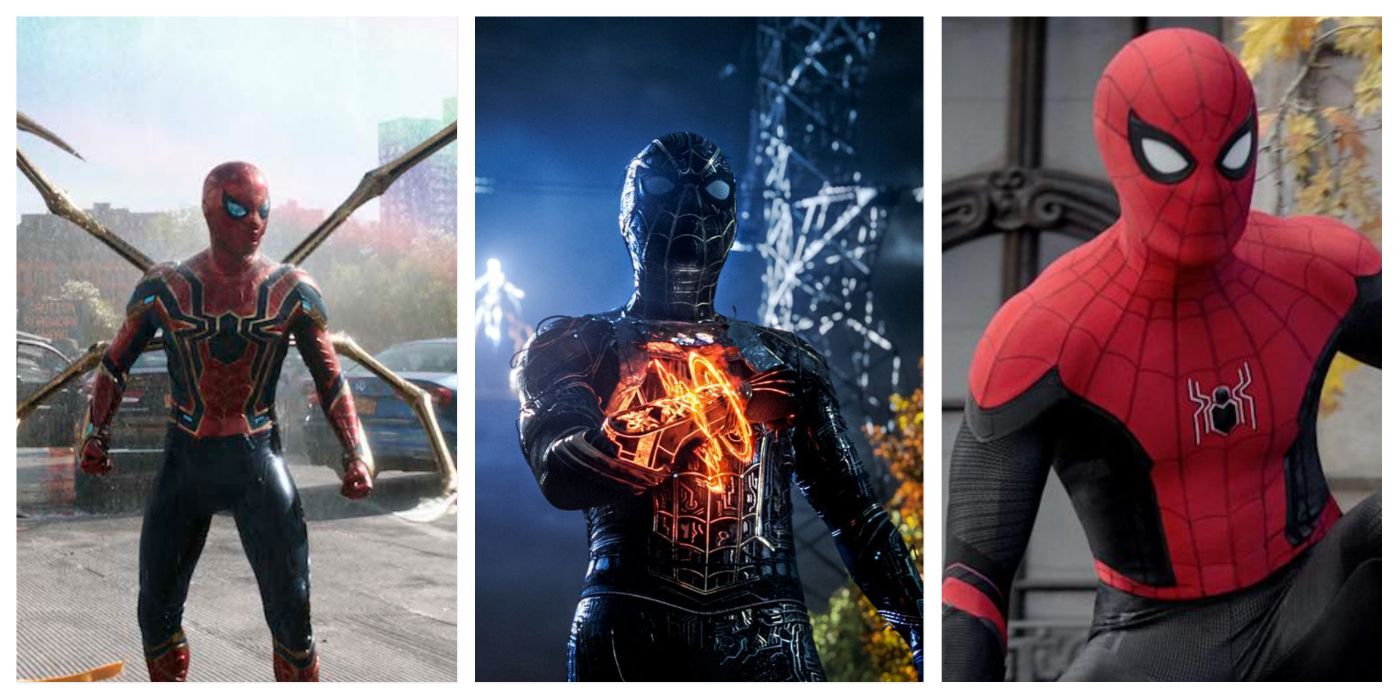 Throughout the MCU Spider-Man trilogy, Peter Parker (Tom Holland) has donned multiple suits for his crime-fighting as Spider-Man. Spider-Man: No Way Home continued this tradition by having him use the Spider-Man costumes he’d received in past movies, giving old suits new touches or creating new ones altogether.

Related: All Of Peter’s Costumes In The MCU, Ranked (As Of No Way Home)

Peter eventually settles with one homemade suit at the end. Although his previous costumes deviated from what Spider-Man stood for, it was sad to see them left behind. Peter’s Spider-Man outfits in No Way Home had a lot going for them, whether it was their symbolism or other interesting details viewers may have missed.

Peter created his upgraded suit in Spider-Man: Far From Home via a Stark fabricator. The costume utilizes Stark technology, but the mind behind it is all Peter. Except for the web wings and taser webs, the suit has none of the gadgets from Stark’s first Spider-Man suit.

At the beginning of No Way Home, Peter starts with the upgraded suit. However, whatever influence Tony had on it in previous movies has faded. While Peter wears this suit, he doesn’t rely on its tech; he relies on his natural abilities. The costume is damaged early in the movie, and Peter resorts to unconventional means to mask the damage and work with his friends on the sidelines.

Peter uses a total of five suits in No Way Home. Two costumes were created in the previous movies, while the other three are brand new. Nonetheless, two of the latter three were byproducts of the Far From Home costume.

The first was the black and gold suit, which was nothing but the upgraded costume flipped inside out due to a Mysterio supporter splattering it with paint. The second was the integrated suit given to Peter by Doctor Otto Octavius (Alfred Molina) as a thank you for saving his life. These aspects point towards the upgraded costume being his starting point on the road to becoming the true version of Spider-Man.

After the paint is splashed over the costume, Peter cannot get the stains out immediately. Thus, he flips it inside out to make it suitable for use. As a result, viewers can see a lot of the suit’s wiring sticking out.

While it’s just the suit turned inside out, it also represents the state of Peter’s life. His identity has been outed, his friends and family have suffered for it, and his bright future has disappeared. As the cherry on top, multiversal villains are running rampant due to his foolishness – just when he finally managed to turn the whole mess around!

Black clothing is associated with evil and darkness. In Spider-Man 3 (2008), Peter 2 (Tobey Maguire) acquires a black suit from the venom symbiote before going down a destructive path.

While the role of the black suit in No Way Home wound up being light-hearted, it foreshadowed Peter Parker (Tom Holland) going down a dark path later in the film. After losing his Aunt May to the Green Goblin (William Dafoe), Peter is left broken. Though his counterparts convince him to keep going forward, he remains hell-bent on killing the Goblin out of vengeance. Despite the symbiote not possessing him, his anger is on par with its power.

6 Peter Loses A Big Part Of The Iron Spider Suit

Peter’s Iron Spider costume was the last thing he had from Tony Stark as of No Way Home. Alas, Peter’s blunder resulted in him losing a part of it.

When Peter tries to find an MIT administrator to get her to reconsider his friends’ college applications, he attempts to use the Stark Network to do so, only to find it offline. The reason for this is due to Stark industries undergoing investigation. Consequently, he’s left to search the highway for the administrator on foot. The suit may be a great piece of Stark technology, but Peter’s spidey-sense is what ultimately helps him.

5 The Iron Spider Suit Will Never Be The Same

During the fight on the bridge, Doc Ock rips the chest piece from Peter’s Iron Spider suit. Thankfully, this works in Peter’s favor as he can control Doc’s arms using the Bluetooth embedded within the armor.

Unfortunately, the suit is permanently damaged. Peter usually uses a giant charging port for the Iron Spider suit, which barely appears on-screen in No Way Home. The nanotechnology Doc absorbed is eventually integrated into Peter’s upgraded costume, and the remains of the Iron Spider wind up destroyed, along with Happy Hogan’s (Jon Favreau) apartment. Even if someone discovers the remains, they’ll never be able to assemble the suit again.

4 The Integrated Suit Represents Peter At His Peak

After Peter successfully cures Doc Ock by replacing his broken inhibitor chip, the latter expresses genuine gratitude towards him and transfers the nanites he absorbed from the Iron Spider onto Peter’s upgraded suit. The costume is the same save for a golden spider emblem.

The brightness symbolizes Peter’s goodwill and how well it’s paid off. It’s the peak of Tony’s work combined with Peter’s potential for greatness. The gold stands out far more than the black and shines a light on the happiness of the moment. However, this makes it all the more tragic when everything comes crashing down moments later.

Throughout the trilogy, Peter has lost his many suits. The Stark costume exploded in Far From Home, Peter abandoned the Iron Spider Armor in Happy’s apartment, and the upgraded outfit became the integrated suit.

In any case, Peter still has the integrated costume at the end of the film. Yet, he crafts a new suit anyway. No explicit explanation is given for him doing this, but one can conclude it’s because Peter’s actions put Stark industries in a lot of trouble, so he might want to lead a life away from them for the time being. In future crises, Peter may break out this suit again, and in due time, the world will likely forgive Stark and forget Spider-Man’s alleged crimes.

At the end of No Way Home, the world forgets Peter ever existed, leaving him with no home and no one to turn to for help. Nevertheless, he presses on as Spider-Man and sews a new suit to continue his vigilantism.

Related: Spider-Man: 10 Things Peter Can’t Do After The End Of No Way Home

The blue and red colors come from the first homemade suit he created before he met Stark. It’s also more reminiscent of the comics. However, the spider emblems on the front and back resemble those on his variants’ costumes. It makes sense considering they’re who encouraged him to press onwards in May’s honor. They were also the only people who understood him in his darkest hour.

Peter’s new suit at the end of the movie is the first suit without Stark furnishings since Captain America: Civil War. Although it only appears briefly, it means a great deal.

Before meeting Stark and becoming an Avenger, Peter has always been a ground-level superhero. The suit is simple and made of fabric, signifying his purpose to stick up for those who have nobody. It also emphasizes Peter’s natural talents, which are all he has left as Spider-Man. Furthermore, it shows how much he’s grown while signifying his independence going forward.

Next: 10 Best Spider-Man Comic Book Covers From The 80s