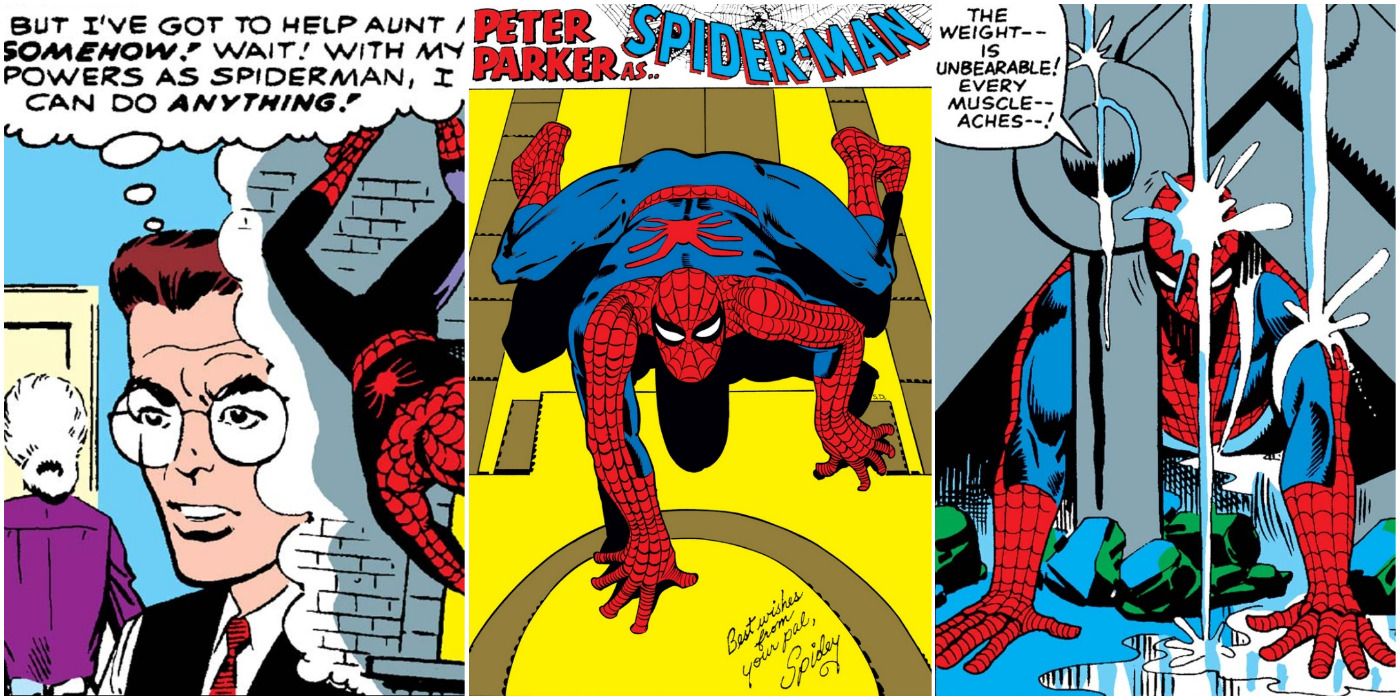 As one of the most iconic superheroes ever, it’s easy to think of Spider-Man as defining superheroism. What’s often forgotten is that comic book superheroes were around for over twenty years before Spider-Man debuted. Also, the ideas presented in those early Spider-Man stories subverted what was established as a superhero story at the time.

The concept of a teenage hero was a risky one, and Stan Lee was only able to introduce Spider-Man into the series Amazing Fantasy because the series was about to be canceled. Spider-Man was given his own title The Amazing Spider-Man written by Stan Lee with art by Steve Ditko, which ran for 38 issues but introduced new ideas never seen in superhero comics before.

10 Spider-Man Was One Of The First Teenage Heroes

Teenagers have been superheroes since the Golden Age, but they’re usually sidekicks to adult heroes. Spider-Man proved teenagers could be their own heroes, and he even demonstrated how their stories could be more interesting than older superheros’ arcs.

For example, Spider-Man had problems that didn’t involve fighting supervillains. In addition to his responsibilities as Spider-Man, Peter Parker had to battle personal problems too, including maintaining a social life, earning money, and keeping his grades up. As a result, Spider-Man’s problems mirrored those of his audience, thus making him the most relatable hero in the comic medium.

9 The Spider-Man Art By Ditko Is Iconic

One of the reasons Steve Ditko was made the artist of Spider-Man over Jack Kirby was because Kirby’s art style is full of strong heroes who almost burst from the page. Ditko took a different approach with Spider-Man.

Spider-Man was strong, but he was agile too, able to crawl up walls and buildings. Ditko’s poses reflected that side of Spider-Man, including his full mask and web-patterned costume to highlight his mystery. He was also characterized by the tools he carried with him, such as his web shooters and spider signal.

New York City is a huge center of activity in the Marvel Universe. Many Marvel Comics took place there, but it was the early days of the Amazing Spider-Man that took advantage of the setting.

From Peter Parker living in Queens to Spider-Man web-swinging through midtown Manhattan, the action took place all over New York, as opposed to a comic book like Fantastic Four, which is headquartered in New York but had its heroes adventure outside the city limits. Locations and characters introduced through Spider-Man went on to become Marvel fixtures.

7 Peter Dated An Older Woman Who Wasn’t His Assistant

At the time, Marvel included love interests in their supporting cast, but many of them were the heroes’ assistants. For example, Pepper Potts, Jane Foster, and Karen Page all worked for their respective hero’s secret identity. The dynamics between Peter Parker and his love interest, Betty Brant, were quite different.

Peter was still in high school when he met Betty, who was working at the Daily Bugle. Betty wasn’t much older than Peter, but the fact she was employed full time while Peter was only a freelancer changed things up.

Marvel heroes had their persecutors. The Hulk had General Ross; the X-Men had mankind in general, and Spider-Man had J. Jonah Jameson – editor-in-chief of the Daily Bugle where Peter worked. Unlike the other heroes, Spider-Man couldn’t run from the guy who signed his checks.

Jameson was constantly badmouthing Spider-Man and even hired super villains to go after him. The irony was that Peter had to sell pictures of Spider-Man to Jameson because he was the only one who’d buy them. Consequently, he contributed to his own hate campaign.

The loss of a loved one is often used to motivate a superhero, but Spider-Man went further than that. After gaining his superpowers, Peter Parker used them to seek fame and fortune. He was so uninterested in fighting crime that he let a criminal go, which resulted in the death of Uncle Ben.

The fact Spider-Man could have prevented Ben’s death added a layer of guilt to his superhero motivations. It created a morality never before seen in superhero stories about power and responsibility, which ultimately defined Spider-Man’s character.

4 Spider-Man Doubted Himself, Which Made Him Human

Superheroes are often bold and decisive, but Spider-Man was plagued with doubts and insecurities. As Peter Parker, he was shy and introverted around others, but as Spider-Man, he joked as he fought villains. These are the actions of someone trying to discover their place in the world.

Spider-Man didn’t always make the right decisions. He questioned himself constantly, which filled every issue with emotion and made powerful stories. This kind of depth and character introspection was highly influential to future superheroes who’d follow in Spider-Man’s footsteps.

3 Spider-Man Lived With His Sickly Aunt

Parents who are either dead or absent don’t play a large role in the lives of superheroes. The teenage Peter Parker lives with his Aunt May, who’s one of the most important people in his life.

With Aunt May’s constant health problems, Peter remains conscious of his duties to pitch in and help. Peter wants to tell Aunt May he’s Spider-Man, but he worries what the revelation would do to her health. Consequently, he has to figure out a way to balance his hero and home life.

2 The Green Goblin Was Shrouded In Mystery

Spider-Man was battling a new and exciting villain every month, much like in other books. A villain’s full origin was usually shown during their introduction, but with the Green Goblin, the Marvel creators chose to create some intrigue.

First appearing in The Amazing Spider-Man #14, the only aspect revealed about the Green Goblin was how he wanted to control crime and saw Spider-Man as an obstacle to overcome. Stan Lee and Steve Ditko didn’t see eye to eye on who the Green Goblin really was, so the mystery that built up made him a memorable villain.

1 Peter Parker Aged In The Comics Over Time

The passage of time in comic books is mostly ignored because time moves much slower than in real life, meaning characters don’t age. However, Peter Parker did grow during the Lee/Ditko run.

Peter began as a high school student and graduated in The Amazing Spider-Man #28. Spider-Man was a coming-of-age story, which had Peter overcome some juvenile challenges and move on to more mature ones. This set the precedent for other teenage heroes, like the X-Men, who’d also mature into adulthood.