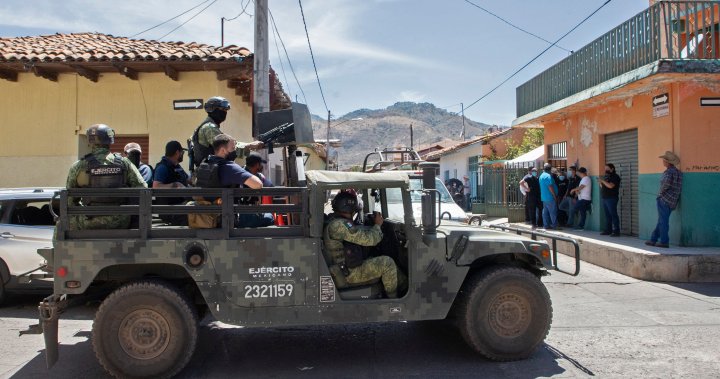 NOTE: This article contains details and photos that are graphic and disturbing. Please read at your own discretion.

A spider monkey dressed to resemble a cartel mascot — complete with a hoodie, “bulletproof” vest and a diaper — was killed in a shootout in Mexico on Tuesday.

According to The Associated Press, 11 suspected gang members were also killed in the shootout in Mexico State.

The monkey was found alongside the body of a slain gunman.

A photo of the deceased spider monkey in its gear was later released to the public and declared authentic by Mexican authorities.

“A primate was killed at the scene, which was presumably owned by a criminal who was also killed at the scene,” state prosecutors said in a statement, adding: “An autopsy will be carried out on the animal by a veterinarian specialized in the species.”

They said animal-trafficking charges would be considered against the suspects who survived the shootout.

The name and owner of the spider monkey are not known.

In recent weeks there were several other additional incidents involving exotic animals owned by drug cartel members in Mexico.

On Wednesday, just one day after the spider monkey was discovered, the attorney general for environmental protection said authorities seized a Bengal tiger in Tecuala, in the Pacific coast state of Nayarit, near the border with Sinaloa. The infamous Sinaloa Cartel, a large organized crime syndicate and drug trafficking group, is prominent in this region.

The Mexican environmental protection office claimed it was searching for the tiger after a viral clip shared on social media showed the animal wandering the streets.

A Bengal Tiger roaming around town and then gets taken home without any resistance. This happened in Tecuala, Mexico. pic.twitter.com/TtDwbHAjRT

In the video, several women are standing on a residential street and shouting in Spanish. “Be quiet, it might come close,” said a woman in the video.

Once the tiger in the video has settled on the ground in front of a vehicle, a man approaches the animal with a lasso and secures it around the tiger’s neck. He leads the tiger away without issue.

After seizing the tiger, Mexican authorities claimed the animal’s claws and fangs had been removed.

Last week, authorities claimed to locate another tiger, this time in the western state of Michoacán. The tiger allegedly mauled a man through a chain-linked enclosure on June 12.

The Associated Press reported that the man could be seen feeding the tiger with one hand in an unauthenticated video posted on social media. When the man reached out to pet the tiger, the animal bit his arm and would not relent. The tiger also bit the man’s other arm.

Michoacán state law enforcement authorities confirmed the man was taken to a hospital, where he died a few days later from his injuries.

Security analyst David Saucedo told The Associated Press that drug traffickers often keep exotic animals as a symbol of status and power, imitating the Colombian drug lords of the 1980s and ’90s.

“Mexican drug traffickers copied from the Medellín cartel the custom of acquiring exotic animals and setting up private zoos,” Saucedo said. “According to the code of the drug trafficking aristocracy, having a private zoo was a prerequisite for being part of the circle of big-time drug traffickers.”

Saucedo continued, telling The Associated Press that sometimes exotic animals were also utilized by cartels for more sinister purposes, including the use of tigers and crocodiles to “disappear” and “devour” victims.

— With files from The Associated Press

The 15 Best Gunslingers In Anime, Ranked