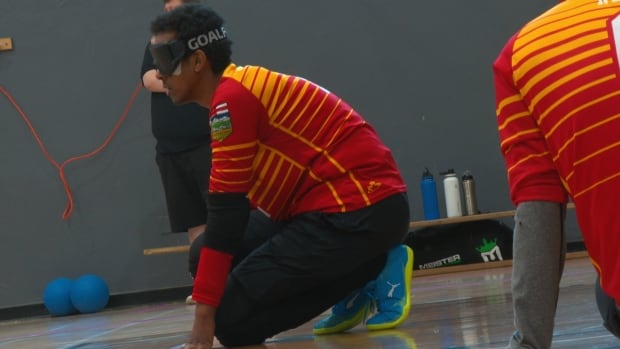 After being put on hold due to the pandemic, the 2022 Canadian Goalball Championships are underway this weekend in Calgary at the Bob Niven training centre at WinSport.

Goalball is a Paralympic sport played exclusively by athletes who are blind or visually impaired.

Blair Nesbitt, a player on both the Alberta and Canadian men’s goalball teams, said it felt good to be back on the court.

“It’s been really hard on athletes not having competition, and competition is what helps make players better.”

He said the tournament will help coaches evaluate different athletes and begin making selections for the national team pool ahead of the world championships set for later this year.

The game is played by throwing a ball along the surface of the court, in the direction of the other team’s net. Players track the ball’s movements by listening to the sound of the bells inside it.

Both the Canadian men’s and women’s goalball teams recently competed at the Goalball Americas Championships in Sao Paulo, Brazil this past February. The women’s team won silver while the men’s team took home the bronze.

Linda MacPhail, the executive director of the Alberta Sports and Recreation Association for the Blind (ASRAB), said the Alberta men’s and women’s goalball teams had province-wide representation from Calgary, Edmonton and Red Deer.

“Two of the women on the women’s team were competing in Tokyo for the recent Paralympic’s … and some were just at the Inter Americas competition in Brazil.”

Nesbitt said an important aspect of being back playing is keeping the younger generation engaged in the sport.

Kaden Johnson, who’s new to goalball, drove all the way from Red Deer to take in the spectacle.

“I’m really excited to be here so that I can see potentially what I can do in the future if I was in one of these competitions,” said Johnson.

“It’s just really cool to see how the seniors play and what I could be working toward.”

Johnson, who has Leber Congenital Amaurosis (LCA), currently plays on a junior team in Red Deer.

Rose Mary Smith and her son Merrick, who was recently diagnosed with a visual impairment called retinitis pigmentosa, also made the trip down.

Smith said the tournament is an opportunity to take in a whole game for the first time.

“[Merrick has] always been a super athletic child. Before he was diagnosed, he played hockey and he loves sports and so goalball is a sport he can participate in … it gives him a sense of purpose,” said Smith.

“It’s really exciting for them to see everything they’ve been practicing come together as a whole.”

Smith said she’s grateful for organizations like ASRAB where Merrick can connect with other kids in the same position as him.

For MacPhail, the tournament is a great chance for kids like Merrick and Kaden, who are just starting out in the sport, to see what the future could hold for them.

“It’s really exciting for us to develop that sense of community within the kids so that they want to come out and they develop their [friendships] and [can] then go on to compete.”