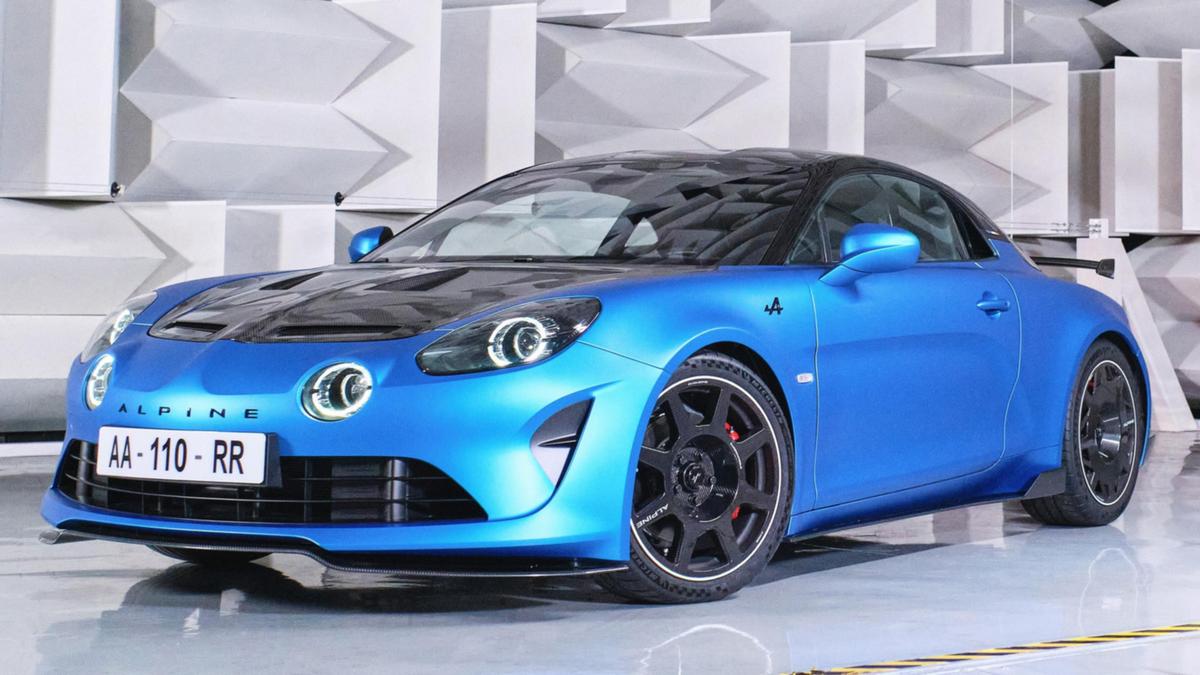 Alpine has revealed a “radical” track-focused version of its A110 coupe that’s lighter, quicker and has more downforce.

Called the Alpine A110 R, this track-focused sports car won’t be coming to Australia, according to a spokesperson for local Alpine distributor Ateco.

The spokesperson said the company is holding out for the upcoming electric vehicles (EVs), which haven’t been revealed yet and aren’t confirmed for the Australian market.

The A110 R has previously been described as the “ultimate expression of lightness and performance”, while remaining road-legal.

The track-focused coupe weighs in at 1082kg, which is 34kg less than existing A110 S, thanks in part to a number of lightweight exterior and interior elements.

On the inside there are also single-shell carbon fibre Sabelt racing seats with a six-point safety harness that save 5kg.

Power in the A110 R comes from the same 1.8-litre turbocharged four-cylinder engine as the A110 S and GT, which produces 221kW of power and 340Nm of torque.

This is mated to a wet seven-speed dual-clutch transmission with drive sent to the rear wheels.

In addition to the lightweight components, the Alpine A110 R produces 29kg more downforce than the A110 S Aero Kit, yet also has 5 per cent less drag.

This is thanks in part to the rear spoiler with swan-neck mounts, carbon fibre front lip, side skirts, flat undercarriage, and an “optimised” rear diffuser that’s made out of carbon fibre and fibreglass.

In the rear diffuser there’s also a 3D-print double wall exhaust which is claimed to isolate exhaust gases and protect nearby components.

There have been “exclusive improvements” to the chassis and suspension to make the driving experience “more intense than ever before”.

The A110 R has a stiffer suspension setup with 10mm lower ground clearance that can be lowered an additional 10mm thanks to adjustable shock absorbers.

Stopping power is provided by a set of Brembo high-performance brakes with 320mm composite front and rear discs.

As previously reported, Alpine withdrew the regular A110 from the Australian market in late 2021 as it doesn’t conform to the latest side-impact design rules.

Alpine is planning on going all-electric by the middle of the decade and recently showed off its A110 E-ternité “rolling laboratory” concept which uses the same battery modules as the Renault Megane E-Tech.

The brand plans to reveal an electric replacement for the current A110 mid-decade which will be built in partnership with British sports car specialist Lotus, using the brand’s new E-Sport electric platform.

Alpine is also planning to launch a high-performance electric crossover called the GT X-Over, and a hotter version of the upcoming Renault 5 EV. All three of these EVs will be launched by 2026.

It’s unclear at this stage if Alpine will return to the Australian market with its upcoming EVs at this stage.

A spokesperson from Ateco, Renault’s Australian distributor, said in October 2021 that when the new models are revealed in full, the product planning team will then assess if they will be brought to the Australian market.

Herschel Walker hauls in $12 million the past three months in Georgia showdown with Democratic Sen. Warnock