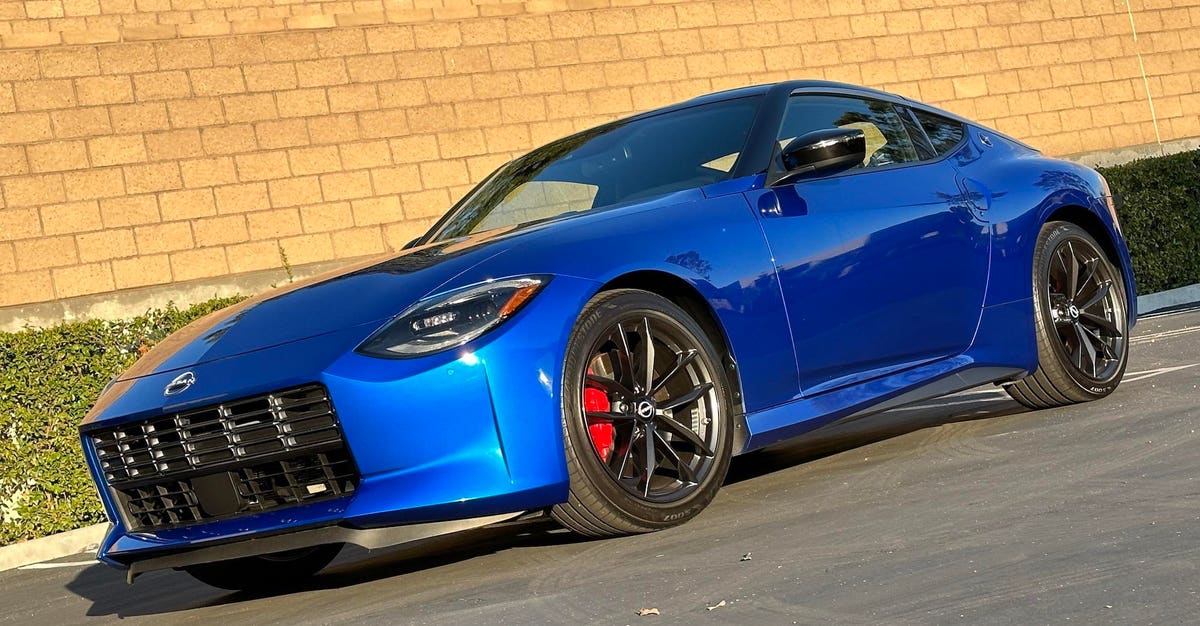 Nissan has introduced an “all-new” Z performance car after teasing various sleek Z concept cars for nearly 2 years. The concepts all featured a clean, streamlined, retro shape, one Nissan largely manifested with the final production model. If you’re a fan of vintage nameplates, throwback styling, and modern engineering, the “new” Z is the latest dream car to hit showrooms. Or is it?

If you’re noticing a recurring theme of quotation marks around every “new” reference to this vehicle, that’s by design. The 2023 Nissan Z looks new, inside and out, but it rides on the same FM (”front midships”) platform the original 21st century Z — the 2003 350Z — launched with 20 years ago.

That doesn’t mean this chassis, and the latest Z, can’t deliver an entertaining driving experience. With a 400-horsepower, twin-turbocharged 3.0-liter V6 engine, the “new” Nissan Z is plenty quick. Instrumented testing puts the rear-wheel-drive coupe at around 4.4 seconds in zero-to-60 acceleration and 13 second flat in the quarter mile, both respectable figures. Nissan also gets credit for offering the “new” Z with a 6-speed manual transmission, commendable given how many sports cars don’t provide a three-pedal option in 2023. A 9-speed automatic is also available.

Retro styling — and transmission — aside, the 2023 Z’s retro underpinnings can also be felt when driving the car aggressively. Our test car was the “Performance” trim, which includes a stiffer suspension, limited-slip differential, and 19-inch alloy wheels with performance tires. That sounds like the proper recipe for a highly-capable sports car, and until you really push the Z, it is.

But, when driven at a level where competing sports cars remain composed, the Z’s aging architecture reveals itself through excessive body motion and chassis reverberations. It’s not enough to quell the Z’s driving fun, but it impacts confidence and, ultimately, doesn’t feel up to modern-day performance expectations. The twin-turbocharged V6 engine’s Dr. Jekyl/Mr. Hyde personality, with a somewhat muted initial throttle response that suddenly goes thermonuclear when turbo boost hits, is another retro trait we’d probably leave in the past, though some may enjoy it.

The Z’s most obvious competition, in both price and retro-Japan mojo, is the recently revived Toyota Supra — which is really a BMW Z4 with different bodywork. That’s not a bad thing, as both the Z4 and the Supra offer exceptional driving dynamics. The Supra’s modern chassis and lower curb weight result in quicker acceleration, superior braking, and greater poise compared to the Z, illustrating the advantages that come with a modern chassis

If the “new” Z’s updated exterior design appeals to you (we love it) more than aggressive driving dynamics, that might be enough to sway your choice between the two. The Nissan also features a new interior with a standard 8-inch touchscreen or optional 9-inch screen with navigation (included in the mid-grade Performance trim).

A Bose audio system, heated leather seats and wireless Apple CarPlay were also featured in our $53,210 test car, making it easy to cover long distances in comfort while fending off fans who regularly pointed fingers and iPhones at our Seiran Blue Z during our driving loop.

Retro isn’t always a bad thing, and some enthusiasts actually prefer it. The 2023 Nissan Z provides retro in spades, from the name to the styling to the power delivery and driving dynamics. If the Dodge Challenger continues benefit from its aging platform and retro experience (sales volumes confirm, it does!), then Nissan may be on to something by saving costs while retaining an older platform. In a market where SUVs flourish and traditional cars are regularly cancelled, we’ll take an aging Z over no Z any day of the week.

The Xi dilemma: China’s instability and a zero-COVID trap