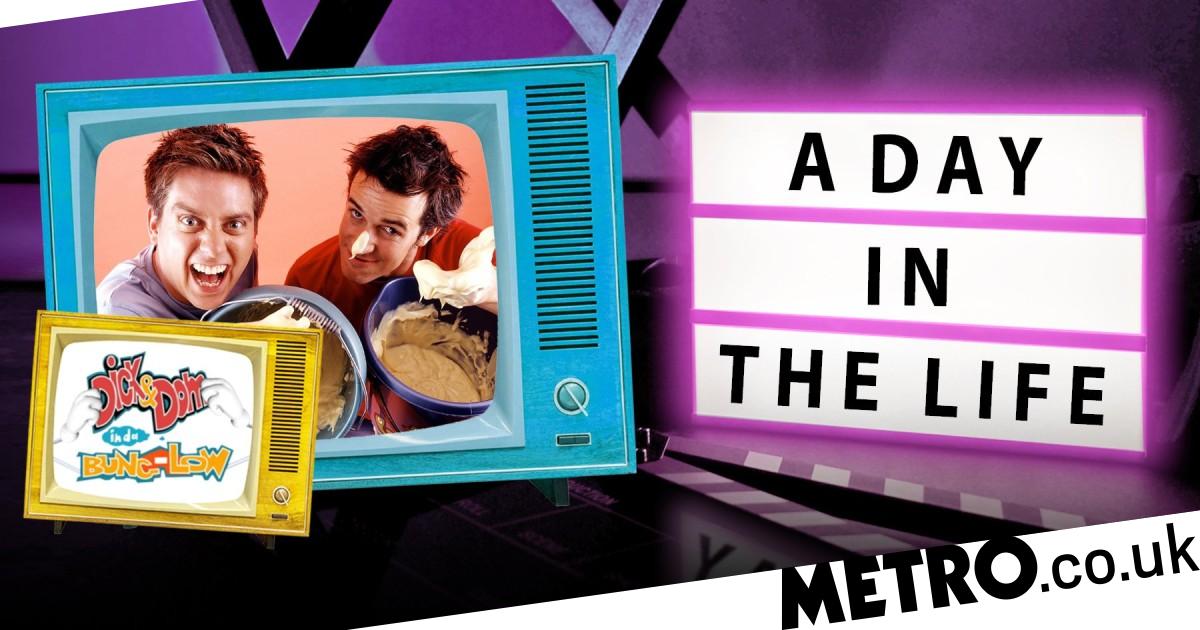 Dominic Wood and Richard McCourt, aka presenting legends Dick and Dom, tell Metro.co.uk what it was like to spend a weekend hosting Dick & Dom In Da Bungalow.

The pair first joined together as a double act 25 years ago, presenting ‘the broom cupboard’ presentation links on Children’s BBC in the 1990s and early 2000.

But when digital channel CBBC launched, they were offered their own show, which invited kids on to cause absolute mayhem across a weekend of programming.

Each Saturday, a new group of six children, who were all friends, would enter the world of the bungalow, competing for points and prizes in a multitude of bizarre challenges.

The contestants, who were known on the show as Bungalow Heads, hoped to not be the one with the fewest points by the end of the mega weekend, as it would mean being gunged with custard while sitting on a toilet, as you do.

While the programme was often complained about on BBC’s Points Of View (what a throwback), children across the country absolutely loved it. It even bagged the stars two Baftas in 2004 for Best Presenters and Best Children’s Entertainment, and still prompts ‘Bogies’ shout-outs from fans to the hosts every single day.

Now, Dick and Dom themselves tell us what it was like to get to host one of the wildest kids’ shows ever on the box, nearly 20 years on.

The show’s title was inspired by Ali G Indahouse

The series landed in the summer of 2002, a few months after The Ali G Show spin-off movie, Ali G Indahouse, was released in cinemas.

The comedy film, which featured the very popular Sacha Baron Cohen provided inspiration for the title, but just with a slight twist, as Dick said: ‘The actual title of the show came first because Ali G was big at the time with Ali G Indahouse. It was something a bit like that, streetwise.’

The idea of ‘Dick and Dom Indahouse’ was floated around, but thought of as being too similar.

‘Somebody came up with the title Dick and Dom in Da Bungalow. We knew then that it was going to be a bungalow setting,’ he added.

All applications were done via post, with passport photos attached

Before the days of applying for programmes via an online form and being poached on Instagram by producers, people actually had to make quite a lot of effort to fulfil their dreams of being on TV. Can you believe it?

And getting on Da Bungalow took some dedication, even just to send the form in the first place.

‘We’d get 1000s of these application forms we didn’t have to go to we have a team of people amazing team that went through them or picked out some great kids,’ Dick told us.

The pair both recalled just having an absolute blast throughout the whole five series, and it’s no surprise considering how mad every single programme was.

Dick admitted they’d laugh ‘from the moment Friday night’s script meeting happened, all the way through till Sunday’ and promised that a lot of the classic moments were all impromptu.

‘It wasn’t like working it was just completely and totally enjoyable. We’d get in on Friday night do a script meeting, but there wasn’t really a script, it was more of format points!’ the presenter noted.

Lots of the most golden content came from the kids themselves

While there was a fantastic production team constantly coming up with hilarious ideas, as well as the hosts themselves, it was the contestants who often gave the series its wildest moments.

Dom described the kids as giving them ‘the best content’ and shared: ‘They were actually the stars of the show. They would come out with things that no production team meeting could ever even contemplate coming up with.

‘Their timing and their genius comedy were one of the most important things for the show. The thing about it was, they were so excited because it was the ultimate thing for any kid in the country to turn around and go, “Oh my god, we’re going on Dick and Dom in Da Bungalow.”

‘When they were there, they were all so fuelled and excited.’

Probably because they were given an incredible amount of sweets beforehand

Dick and Dom didn’t actually meet the six lucky Bungalow Heads, who were always very excited until they walked through the door of the bungalow themselves.

Luckily the kids were more than ready to get cracking at that point.

‘We’d only meet them as soon as we were going on air really because they were ushered in by the chaperones, fed ten tonnes of Haribo Tangfastics and lots of fizzy pop. By the time we met them on air, they were absolutely wired,’ Dick admitted.

In the early days of Da Bungalow, both Saturday and Sunday shows were filmed live across the weekend, but this changed later on in the series when the pair fancied a ‘Sunday morning lie in’ and honestly, who can blame them.

Recalling what the filming schedule was like, Dom said: ‘After that Saturday show, live on BBC One, we’d actually pre-record as live the Sunday morning programme which went out on the CBBC channels

‘People that didn’t have Freeview at the time missed out on the second episode, which used to go on a Sunday morning!’

After finishing the show, they were straight on the pints

Anyone who’s watched the programme will know just how much energy it takes out of even the viewer, so we can’t imagine how tired Dick and Dom were at the end of a day’s filming.

But how did they unwind? Well, a trip to the BBC bar, of course.

‘Straight after the show, we were straight down to the pub, the BBC Bar. It was around that time everything was a bit like that, the Top of the Pops green room was an absolute mess.

It was a wild time to be in the media as well. The BBC was just a hive of activity and excitement and the people running around the whole time. It was so cool.’

The programme was hilariously complained about, a lot

Dom recalled their executive producer having to often respond to letters back to BBC’s Points Of View, due to complaints sparked by their programme.

He said: ‘People would write complaining letters, and there’s a famous clip of Terry Wogan reading out a letter complaining about how it wasn’t suitable.’

His presenting partner remembered being ‘mentioned in the House of Commons’ regularly during the show’s run too, but it was often due to things contestants had come up with themselves.

We were mentioned for various things that people thought were a bit over the line, which they weren’t. They were all behind the line, before the line, even. We always stopped at the line.

‘A lot of this stuff was actually thought up by the kids, so blame the children!’

You can buy tickets for Dick And Dom In Da Bungalow’s 20th Anniversary tour here.


MORE : The Big Questions: Fred Sirieix on Gino D’Acampo hijinks, ‘killjoy’ Gordon Ramsay and why we want to be French


MORE : Why we came out on reality TV: ‘I hope parents can see how cool my dad was about it’

Want to Get Benefit of Yoga During Your Binge-Watching Time? Try These Asanas