A meteoric rise and a rocky road to re-election 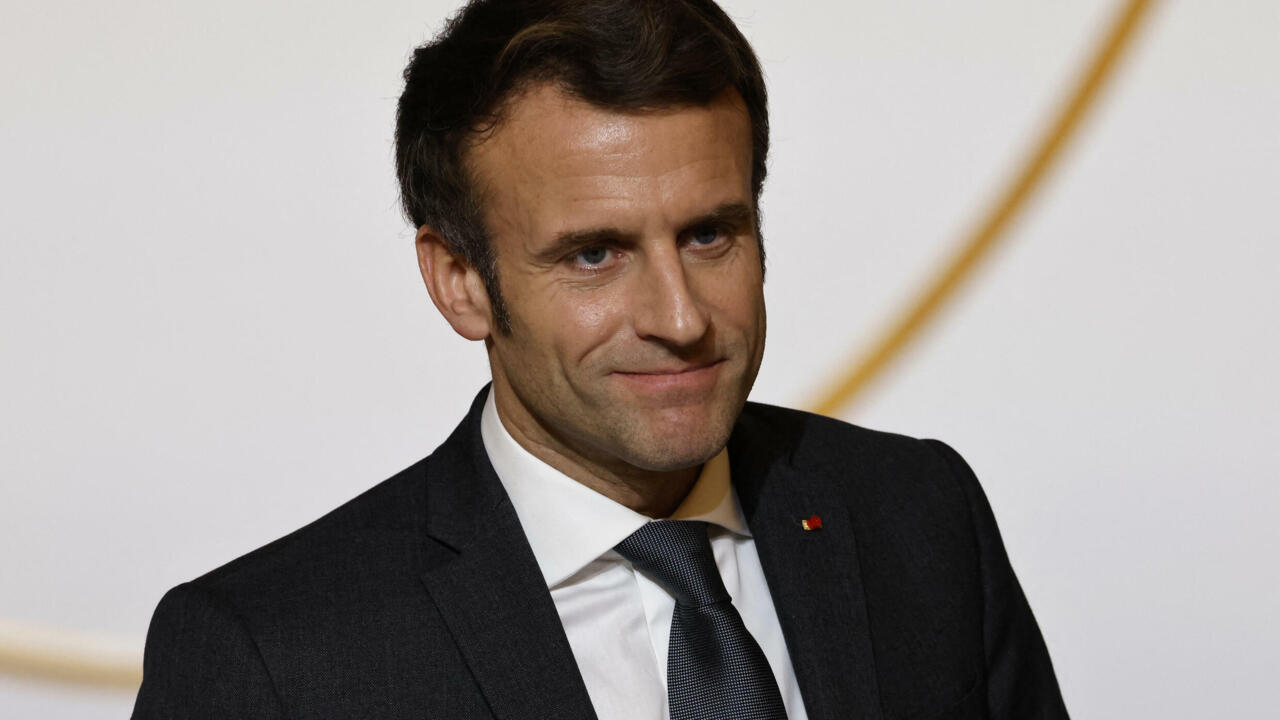 Emmanuel Macron won office in 2017 running as an independent centrist and an ambitious reformer. The youngest president elected in France’s modern political era, Macron’s rise to the Élysée Palace atop a fledgling party he had founded himself was swift and iconoclastic. But the road to his second term, five years pockmarked with unprecedented crises, was no smooth ride. Re-elected on Sunday night after facing down Marine Le Pen once again, Macron, divisive as ever, has fresh challenges ahead.

Back in 2017, Macron had never been elected to any public office before he beat far-right finalist Marine Le Pen, 66.1 percent to her 33.9, to win the French presidency. Still in his 30s, the rookie leader was a fresh face in every sense.

Now with a full five-year term under his belt, Macron has the grey hair, the crow’s feet and the furrowed brow to show for it. Time is treacherous. But so, too, is the exercise of power through a period of historic tumult.

Be they of his own making, at least in part, or fully extraneous bombshells, the challenges arrived quick and thick for Macron as president. Early on, in 2018, his image took a hit with a crisis at the palace when it was revealed that staffer Alexandre Benalla, the president’s former bodyguard, had been caught on camera months before assaulting May Day demonstrators, apparently with relative impunity.

Soon after, the Yellow Vest movement rose up against fuel taxes before roiling into a fiery anti-government revolt that lasted months. Crippling pension reform strikes followed. All the while Brexit loomed large. And then the Covid-19 pandemic struck, sending governments worldwide into unchartered territory.

As Macron’s term wound down, French troops were forced out of Mali and war returned to Europe when Russia invaded Ukraine. “Apart from an invasion of termites, Emmanuel Macron was spared little,” Le Monde political journalist Claire Gatinois quipped.

Still, Macron wants to stay on for more. After entertaining some faux suspense for months, the 44-year-old finally threw his hat in the ring again in March, announcing his last-minute bid for re-election just 38 days before voters went to the polls for the first round on April 10.

And yet even after such an intense half-decade for the country, do French voters really know Emmanuel Macron? So contrasting are opinions of the man today, one would think the jury is still out. Supporters revere him as an audacious, seductive, protective sort of conqueror while detractors slam his arrogance, deeming him a “president of the rich” uninterested in the little people. Fans and foes alike agree that Macron’s true character remains elusive.

Ambition on the rise

Macron was born in Amiens, northern France, on December 21, 1977, the eldest of three, his parents both doctors. His early life was one of privilege, punctuated by piano lessons, sport, school, ski holidays and trips abroad. A gifted student, Macron won a national prize for his French-language skills at 16. There was, however, one snag in the young Macron’s academic career, at least from his family’s perspective. After studies at La Providence, a private Catholic school in Amiens, Macron’s parents sent him to Paris to put some distance between their teenaged son and his forbidden love interest, his theatre teacher Brigitte Trogneux, 24 years his senior (Years later, the pair would marry anyway).

In the French capital, Macron pursued his studies at Henri IV, a prestigious high school, before moving on to Sciences Po Paris, a political philosophy degree at Nanterre University, and the École Nationale d’Administration (ENA), France’s top training ground for public service. An elite French education, in sum, although with one nagging setback: Macron failed to win a place at the exclusive École Normale Supérieure, not once but twice.

After graduating from the ENA, Macron joined the prestigious ranks of France’s corps of finance inspectors. In 2007, aged 30, he was selected to help lead the Attali Commission, tasked by French President Nicolas Sarkozy with advancing proposals on how to “free-up French growth”. The following year, Macron took a leave from public service to join the Rothschild Group as an investment banker, earning a fortune negotiating big deals.

But the brilliant young up-and-comer still had his champions in the echelons of political power and in May 2012, François Hollande, freshly elected president, invited Macron to join his staff at the Élysée Palace. On the campaign trail, the Socialist Party candidate had pinpointed the world of finance his “enemy”. But the confident young investment banker in Hollande’s midst was too good to take a pass on. Hollande named Macron his deputy chief of staff before promoting him to economy minister in 2014, France’s youngest ever at 37.

“He has charm, a quick wit,” former prime minister Manuel Valls was quoted explaining at the time in the Macron biography Élysée Confidentiel. “He hugs you. He winks at you,” Valls said of the gifted newcomer rising through the ranks. The hallmarks of a seductive political operator at work.

As a cabinet minister in a Socialist government, Macron was already something of an iconoclast. Legislation that the former banker tabled in the National Assembly with an eye to “unlocking the French economy”, nicknamed the “Macron Law”, dismayed leftists and ultimately had to be forced through parliament without allowing lawmakers a vote.

But that day job wasn’t Macron’s only political pursuit. At night, he would host dinners, conferring with political observers and mapping out his next move. In April 2016, with a presidential election a year away, Macron launched his own political movement.

But few then could imagine Macron becoming president – not least his boss, the incumbent. Hollande had served four years of a single term and was eligible to seek a second, if he wished. And yet on August 30, 2016, Hollande’s ambitious young economy minister handed in his resignation. Macron had a loftier job in mind.

Over the months that followed, Macron would coax a significant swath of Socialist supporters onside: Those social democrats, tired of the party’s ideological rifts, who viewed Macron as a natural next choice to advance their ideas. Hollande’s one-time protégé even managed the feat of distancing himself in voters’ minds from the Socialist president’s record in office.

Indeed, Hollande was so unpopular as the election approached that he took the unusual step of declining to run again, leaving a doomed Socialist Party nominee, Benoît Hamon, to fight a losing battle with 6 percent of the vote. Meanwhile, Macron’s gamble was golden. In 2017, he topped the first-round vote to face the far-right’s Le Pen in the second round. A landslide run-off win later – albeit with the highest run-off abstention since 1969 (25.4 percent) and a record tally of blank and spoiled ballots (11.47), Macron was the new president.

Elected on a reform platform, Macron set to it undeterred. He embraced the significant palette of powers available to a French president, comparatively free of lawmakers’ oversight. Macron took to deciding the essentials from the Élysée Palace, with the advice of right-hand-man Alexis Kohler, his chief of staff. During his first year in office, Macron set the pace just as he’d planned. And quickly, his decisions began to unsettle some of the Socialist supporters who had carried him to power in the first place.

Macron named a prime minister, Édouard Philippe, plucked from the Socialists’ conservative rivals. One of the president’s first budget cuts – a €5 a month cut to personalised housing aid – hit low-income earners. He did away with the wealth tax as France knew it and imposed a flat tax on capital gains, earning Macron the “president of the rich” monicker that stuck thereafter. (“No, it’s not true,” a begrudging Hollande replied when asked about leftists’ epithet for his successor in 2018. “He’s the president of the very rich,” the Socialist quipped.)

But Macron also courted plenty of trouble with dubious soundbites of his own. Much ink was spilled over the young leader dividing the world into “the people who succeed and the people who are nothing” in 2017. Later, he appeared to sneer at compatriots he called “the Gauls resistant to change”. Telling a young jobseeker that Macron could find him a job just “by crossing the street” entered the annals, too, of the president’s memorably flippant phrases.

But the tide began to turn in earnest for Macron in 2018 with the Benalla Affair, setting his institutional reforms off track and tarnishing his campaign pledge to clean up politics. The chaos of massive pension reform strikes and the Yellow Vest crisis followed, adding further stock to the image of a president cut off from the harsh realities of daily life.

It was the calamity of the Covid-19 pandemic that finally gave Macron the pivot he would use to reinvent his leadership. During a nationally televised address in March 2020 ahead of France’s first lockdown, Macron declared the country “at war” against an “invisible enemy”. The solemn moment marked an end to the rigorous liberal economics of his presidency’s first chapters.

Casting aside trickle-down pretensions, Macron opened the floodgates, vowing to protect the French economy from pandemic damage “no matter the cost”. From the Élysée Palace, he decreed Covid-19 lockdowns and re-openings based on hospital capacity. Talking strategy, he boasted that his reasoning for the country’s controversial vaccine pass was to “piss off” the unvaccinated.

As the pandemic seemed to fade this year and a war in Ukraine began (even as Macron pursued diplomacy to stop it), the French leader’s approval ratings enjoyed a rally-round-the-flag boost. Buoyed by those numbers and absorbed by the conflict, Macron delayed the launch of his re-election bid, again and again, providing new grist for the political mill. Rivals, struggling for traction amid early coverage of the war, were quick to paint Macron’s absence as fresh evidence of his familiar disdain.

After finally joining the 2022 race, Macron waged a re-election campaign that could only be described as minimalist. Topping the first round on April 10 set Macron up for a rematch sprint against the far-right’s Le Pen, forecast to be much tighter than their 2017 run-off. With all the baggage of a presidential record this time, the road to winning the Élysée Palace for a second time was never going to be as smooth as Macron’s first. Having to rely on alienated leftists for the support he needed, rolling back years of recriminations, heightened that challenge. Will the humbling chase for those votes in a tight race chasten the re-elected Macron? Only time – and the new wrinkles it brings – will tell.

This article has been adapted from the original in French.