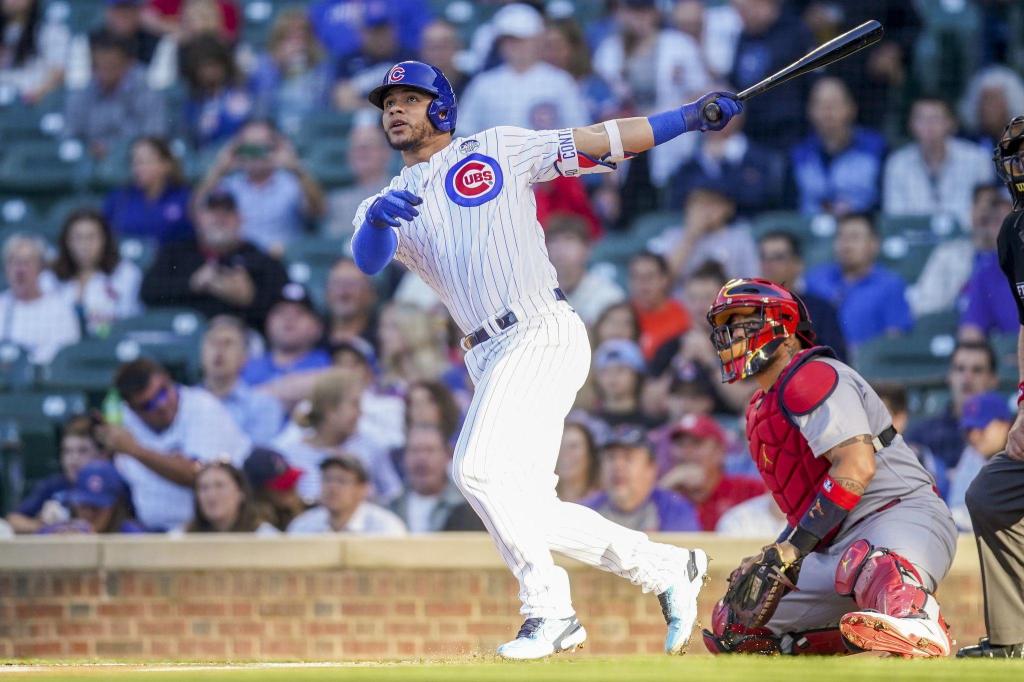 Sunday marks the 10th anniversary of the call-up of Anthony Rizzo, one of the most important days of the Chicago Cubs rebuild.

“I guess we’ll be the face of the franchise — me, him and a couple other young guys in here,” shortstop Starlin Castro said after Rizzo’s arrival. “Let’s see what we can do.”

You know the rest of the story.

Rizzo became a Wrigley Field legend, signed a team-friendly deal, helped the Cubs win their first World Series since 1908, asked for big money when his contract came up and was dealt to the New York Yankees in the last great summer sell-off.

While Rizzo thrives on the best team in baseball, Cubs president of baseball operations Jed Hoyer has embarked on another rebuild (or semi-rebuild), trying to figure out which young star can become the next face of the franchise and which players are expendable.

The Cubs’ 5-3 loss to the St. Louis Cardinals on a sweltering afternoon Saturday at Busch Stadium failed to provide any clues.

Willson Contreras, the Cubs’ best and most popular player, is expected to follow Rizzo out of town after asking to be compensated as one of the game’s top catchers. Christopher Morel could be the Rizzo of the current rebuild but might be too raw to have great expectations thrust on his shoulders. Ian Happ is a Rizzo protege and emerging as a fixture in left field. But like Contreras, Happ might be too valuable to keep in an organization that needs to stock prospects.

Meanwhile, Cubs president of business operations Crane Kenney goes about the business of making money for the Ricketts family, repeating the familiar refrain that all the money brought in goes right back into Hoyer’s budget. On Friday, when Dead & Company played the first of two concerts at Wrigley and DraftKings held a ceremony to sign a steel beam in the three-story sportsbook scheduled to open at the ballpark in 2023, Kenney told The Athletic the money will all go to the betterment of the team.

“So concerts, activities like (the sportsbook), are just additive to the budget, which, as I say, all of the budget in this building, everything that’s generated inside goes to the baseball operations team after we pay our fixed expenses,” Kenney said. “Jed decides when and how much of it to spend. And Jed was clear last week that he did not spend all of his budget this year. So it’s his choice what he does with those revenues, but this is all helpful to that process.”

The narrative of the Cubs saving money for a rainy day down road is a familiar one. Chairman Tom Ricketts declared in November 2018 that many teams “would rather have dry powder a year from now.” He later signed off on a six-year, $126 million deal for pitcher Yu Darvish, then had Hoyer unload him after three seasons to start another rebuild.

It’s impossible to refute the notion the Cubs will spend the “saved” money down the road because we won’t know the truth for a few years at least. That’s the true genius of the Cubs.

When recently discussing last summer’s sell-off of high-priced talent for mostly low-level prospects, Hoyer said: “They’re probably going to be evaluated in 2027 for real, and I think that’s the way it should be.”

In other words, you can’t judge Hoyer’s big moves for another five years, just as you can’t criticize the Cubs for not spending money they’re currently “saving” until we find out in a few years if they’ve actually lived up to their word.

The list of revenue-enhancing projects includes the video boards and massive advertising sprawl at once-ad-free Wrigley, the boutique hotel across the street, the office building, the purchase of almost every rooftop club, the Marquee Sports Network and the premium clubs and upgraded suites.

The sportsbook annex to Wrigley is just the latest addition to the Cubs’ coffers. So where is all the money going if it’s not going to the payroll? Are the “fixed expenses” really that high?

Cubs fans have no one to blame but themselves for this mess. The Cubs were seventh in average attendance Saturday depite the having the fifth worst record in baseball and the second highest Fan Cost Index — $364.83 for a family of four — according to Team Marketing Report.

Something does not compute.

Kenney certainly isn’t the first Cubs executive to try to sell fans on the idea that all the money is going right back into the team. After a 97-loss season in 2000, the Cubs increased ticket prices by an average of 16%, which then-President Andy MacPhail said was necessary to compete in a division with four teams that recently had built new stadiums.

“We’re here to win, and whatever additional revenues are generated through ticket-price increases will be put back into the product, whether it’s payroll, player development or wherever,” MacPhail told the Tribune on Nov. 8, 2000.

Fool me once, shame on you. Fool me decade after decade, shame on me.

But whatever works. The Cubs don’t mind repeating the line as long as fans keep buying tickets. Kenney did it again on WSCR-AM 670 on Saturday morning, even offering apologies for repeating himself.

They are able to get away with it because no one calls out Kenney for his repeated comments.

The Cubs are living on past glory to rationalize the high ticket prices, selling iconic Wrigley Field in advertisements and maintaining the “next great Cubs team” is on its way with the “saved” money for free agents and prospects currently playing in the low minors.

Perhaps they should heed the words of Kyle Hendricks, who struggled all season but pitched a gem Friday night in a 3-0 Cubs win in the series opener. Afterward, Hendricks refused to use his start as an indicator he felt like his old self.

“Somewhat, but it feels so long ago,” he said. “I’m really trying to focus on where I’m at right now and just seeing the game for what it is, taking it and knowing where to go and making my pitches.”

Hendricks, 32, might not be the same pitcher as when he captured the National League ERA title in 2016 at 26. We all get older. Few of us get better.

The Cubs aren’t the same organization they were a decade ago, with many more revenue-producers and opportunities to contend on an annual basis. Yet they continue to trot out the same old narrative and expect their fans to swallow it whole.

Hoyer said last week that he spoke with Ricketts and Kenney about the team’s struggles, and both had questions for him.

“You’d be sort of not paying attention or not doing your job if you’re not asking questions about why we’re struggling in certain areas,” Hoyer said. “Some of it I think is obvious, and some of it is more nuanced. But I think everyone is asking questions, and they should be asking questions.”

Some of us are asking questions.

But we’re getting the same old answers.

Love Island: Casey fuming over Lana and Ron after being cast…