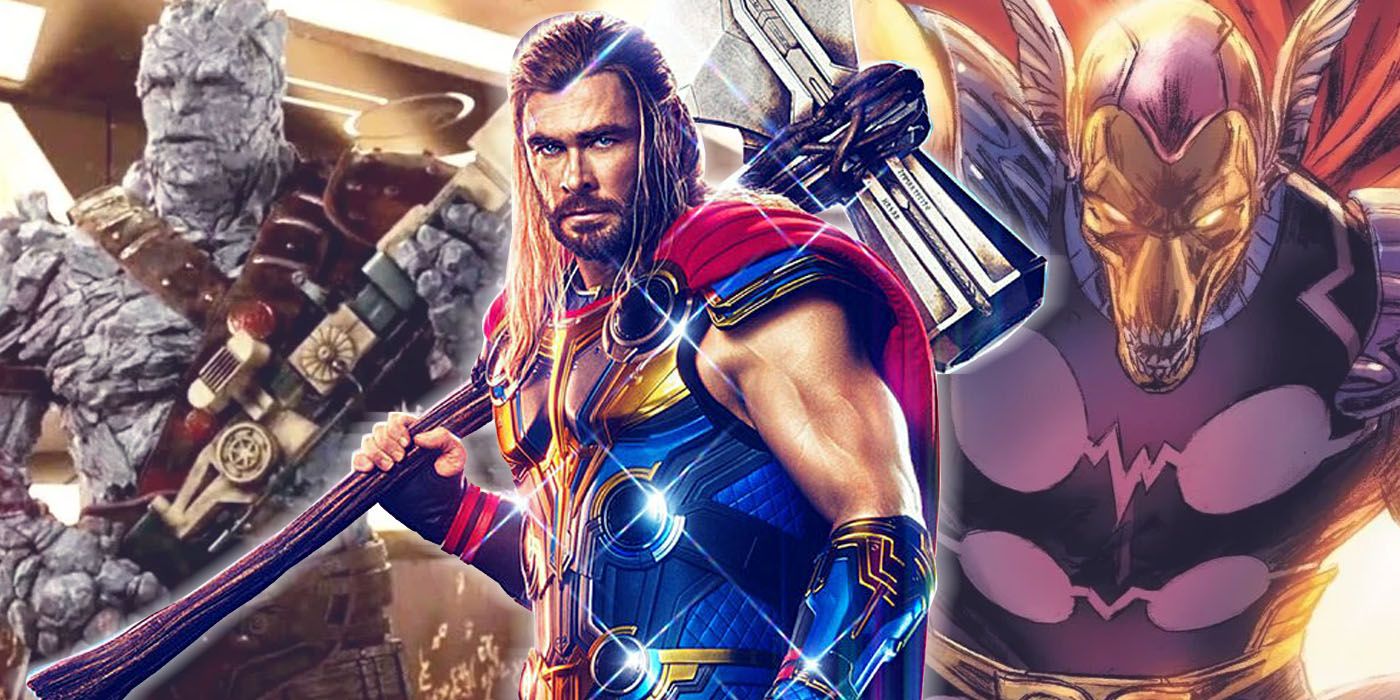 Thor: Love and Thunder is another highly anticipated follow-up for the God of Thunder, who went through a turbulent point in his life from Thor: Ragnarok to Avengers: Endgame. But now, he has an even deadlier threat to face in Gorr the God-Butcher. As a result, Thor and his allies must be on the defensive and do their best to survive long enough to figure out a way to stop Gorr. However, one theory may use this dilemma to return to a famous Thor: Ragnarok location for an iconic Marvel hero.

According to Reddit theorist TheMediocreCritic, Thor and Korg will get left on Sakaar by the Guardians of the Galaxy to find allies to combat Gorr. They knew they’d need muscle and power to aid them as they can only do so much. So, like how Thor built his Revengers on the planet, he would return to find and recruit Beta Ray Bill. And what adds fuel to this theory is that Bill’s head appears on The Grandmaster’s tower in Ragnarok, which also features other faces like the Bi-Beast and Hulk.

RELATED: MCU Theory: Thunderbolts Will Have One Avenger Come Out of Retirement… Again

In the comics, Beta Ray Bill was a super-soldier who used his strength to protect his race from those who sought to destroy them. His heroism eventually made him worthy of Mjolnir, and with the power of Thor, he fought his aggressors and saved his people. Because Bill was proficient with the hammer, Odin granted him his own weapon, Stormbreaker, which the hero used from that point on. While his story was epic in the comics, there would likely have to be some changes in Thor: Love and Thunder to foster his arrival and potentially open the door for him to obtain Stormbreaker.

Since the first trailer for Love and Thunder, Thor has shown that he’s ready to retire his role and live a life of self-discovery. The film has furthered this theory with the arrival of Jane Foster as Mighty Thor. With Mjolnir back, a new protector available and Valkyrie ruling Asgard, there isn’t much left for Thor to do. That said, he’d now have to find someone worthy enough to wield Stormbreaker so that he could relax without worry. With no one readily taking up the mantle, that role would likely fall onto one hero that hasn’t debuted yet — Beta Ray Bill.

While it’s unlikely Thor will die in his recent outing, his self-imposed retirement could lead to an interesting story beat, especially if he willingly gives up Stormbreaker to another. Plus, the theory also added that if Bill is in possession of the axe, he, Thor and Jane could fulfill the story from the comics known as The Three Thors. In that tale, Thors from the past, present and future joined forces to defeat Gorr once and for all. However, since that’s likely impossible in this instance, three metaphorical Thors could easily fit the bill.

For now, Thor’s future is still unknown, but based on the trailers and the presence of Stormbreaker, this theory could be more accurate than anyone could expect. With Gorr being Thor’s deadliest enemy, he will need all the help he can get. And with Stormbreaker rightfully belonging to Beta Ray Bill, it would make sense that he’d earn it in a battle alongside the two Thors. If true, this would mean that Thor could finally retire from being a hero and live a peaceful life he more than deserves.