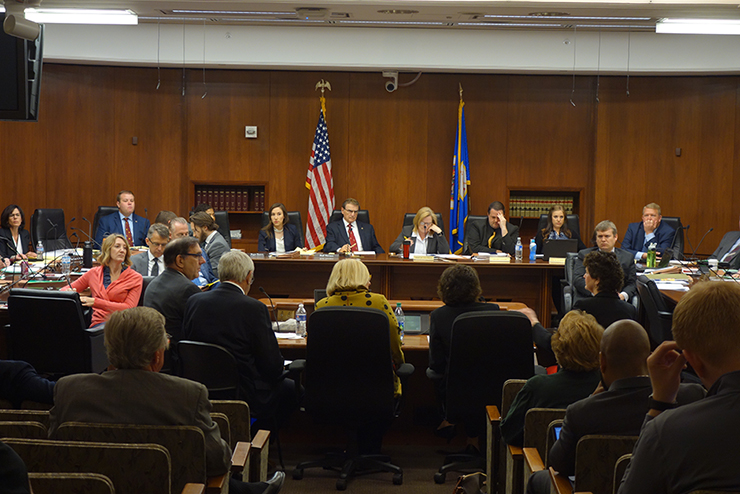 Friday is the application deadline for state residents who would like to serve on the University of Minnesota Board of Regents. Fill out a form and answer some essay questions and you’ll be considered.

But in the case of the complex and often inexplicable process created by state law to appoint the 12 people who form the legal governing body of the state’s flagship university, the “deadline” is more of a suggestion than a rule, because state lawmakers can submit names later.

Applicants will be screened starting Dec. 9 by the 24-member Regent Candidate Advisory Council, which will recommend finalists to the Legislature after a week of interviews in January. But once the council acts, there are several steps during which members of the House and Senate can bring up their own candidates.

A  joint legislative committee made up of members of the House and Senate higher education committees doesn’t have to work with the names the council sends them, however. Members can — and have — put other names into consideration. Sometimes those people win appointments.

Even the names supported by the joint higher education committee carry no unchallengeable standing. Lawmakers who don’t serve on that committee can — and have — put other names into consideration during a super session of the House and Senate called a joint convention. Sometimes those people win appointments.

And to make it more complicated, governors swing into action if lawmakers fail to reach agreement, or if a vacancy opens when the Legislature is not in session. That is how Tadd Johnson, the board’s first Native American, was placed on the board. Johnson’s seat representing the 8th Congressional District is up for appointment this year and he has said he will seek a full term.

Among the positions to be filled is a seat now held by former state Rep. Steven Sviggum who resigned his position as vice chair of the board after criticism for his remarks about the Morris campus being “too diverse.” In his letter resigning that post, Sviggum said he intended to stay on the board “until my term is completed.” Had he sought another term, DFLers who will make up a majority of the votes needed to reappoint him likely would not have supported him.

The names of applicants will be posted next week when the agenda for the Dec. 9 council meeting is posted.

Even though they are advisory and have seen their suggestions rejected in the recent past, the council will go through its process and look for the best candidates to move along in the process, said Sen. Gregory Clausen, a DFLer from Apple Valley who is chair of the group.

“A person has to have an interest in higher education and an understanding of the importance of the university to the state,” he said. “The health of the University of Minnesota is tied directly to the health of the state.

“It’s important that we have a diverse range of people that match what the student body looks like at the University of Minnesota,” Clausen said. “We do have people of diverse backgrounds on the board and I hope that can continue.

“Especially recently with some of the comments that have been made by one of the regents, it’s more important now than ever that our candidates have an appreciation for diversity and they represent diverse cultures.”

As of Tuesday, there were a dozen applications in hand. Clausen said he expects there to be 20 by Friday.

In the end, whichever nominees get the votes of at least 101 of the 201 members of the Legislature win a six-year term to an unpaid but prestigious position. The U of M, older than the state itself, is an institution that has a level of independence from legislators and governors matched by only a few other flagship universities in the U.S. It’s right there in the Minnesota Constitution.

Last session, lawmakers unhappy with a decision to eliminate some varsity sports in a cost-saving move held hearings and asked for changes. But that’s as far as they could go.

“I like to keep our hands away from them,” Clausen said. “When they come up for reelection we can replace them if we are unhappy. But they are the governing board. We need to keep a bit of a distance.”

So the only real influence lawmakers have over an educational, cultural and athletic system with five campuses and a $4.1 billion annual budget — sometimes referred to as a fourth branch of government — is in the appointment of regents. Lawmakers take advantage of it. In fact, the group of positions being filled next year are from the 2017 process that demonstrated the power of the Legislature, which at the time was controlled by Republicans in both the House and Senate.

Sviggum, a Republican former speaker of the House and former regent, had not applied to be a member of the board. But the members of the joint higher education committee advanced him over the three names put forward by the advisory council. He then prevailed in the joint convention with Republicans supporting him and DFLers mostly voting for former Mendota Heights Mayor Sandra Krebsbach.

All four of the people appointed that year were white men.

In 2018, the joint legislative committee sent two names to the joint convention, but an applicant who was not endorsed by the higher education committee members was put into nomination by Republicans and won. That was Randy Simonson.

In 2019, the DFL House and the GOP Senate took until May to meet to select regents. That was mostly due to a disagreement among House DFLers, some of whom wanted to follow the recommendations of the advisory council and some, led by the POCI caucus (People of Color and Indigenous) who wanted to include more nominees of color. Once that caucus came to agreement, the slate put forward won easily.

The process was less controversial in 2021 with just one selection — James Farnsworth — emerging from the floor of the joint convention after not being chosen by the higher education committee members.

“Unfortunately, the regents selection process has gotten to be quite political,” said Clausen, who did not seek reelection. “But we still have people who hold an election certificate and they can vote as they like. So we don’t always get a total voting bloc of either Republicans or Democrats. But the process has become more political overtime.”

MinnPost’s in-depth, independent news is free for all to access — no paywall or subscriptions. Will you help us keep it this way by supporting our nonprofit newsroom with a tax-deductible donation today?

San Francisco approves use of remote-controlled robots to kill suspects