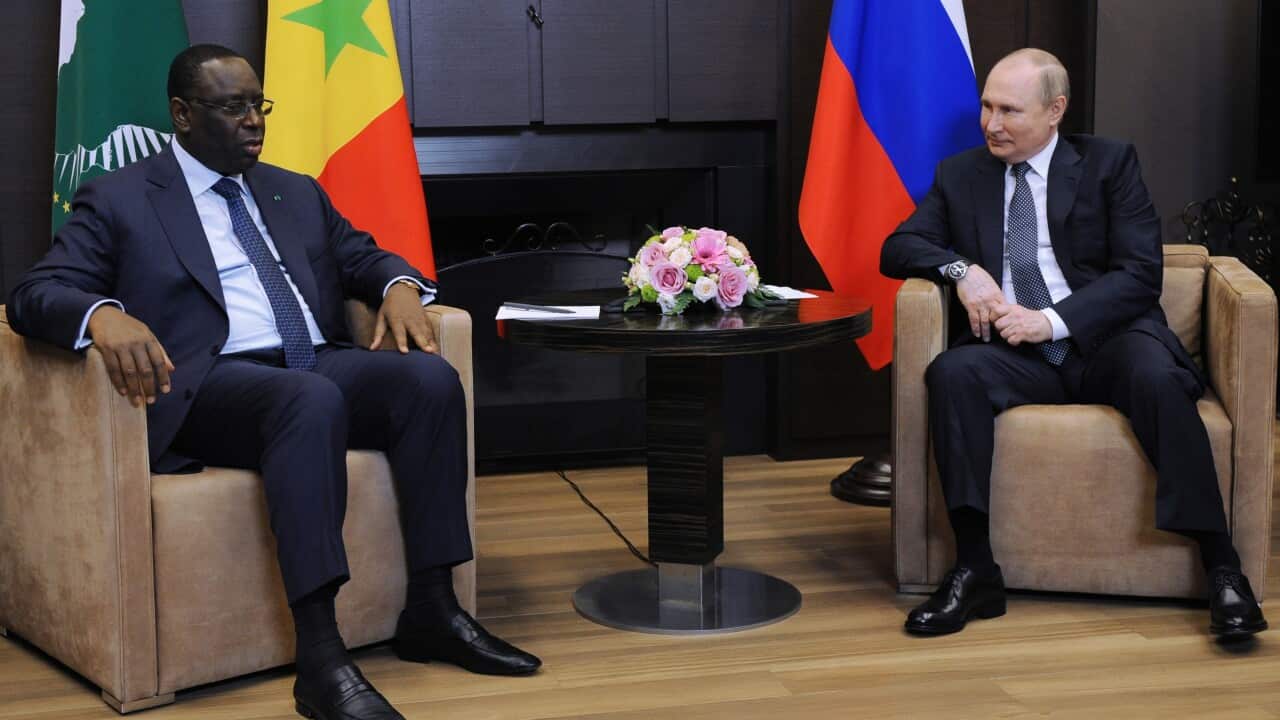 African Union head Macky Sall said on Friday he was “reassured” after talks in Russia with President Vladimir Putin on food shortages caused by Moscow’s military campaign in Ukraine.
Mr Putin hosted the Senegalese president, who chairs the African Union, at his Black Sea residence in Sochi on the 100th day of Moscow’s offensive. Global food shortages and grain supplies stuck in Ukrainian ports were high on the agenda.
“I found Vladimir Putin committed and aware that the crisis and sanctions create serious problems for weak economies, such as African economies,” Mr Sall told journalists, adding that he was leaving Russia “very reassured and very happy with our exchanges”.
Mr Putin in a televised interview in the evening accused the West of “bluster” by claiming Moscow was preventing grain exports from Ukraine.

“There is no problem to export grain from Ukraine,” he said, suggesting several possible routes.

Exports could transit through the Russian-controlled ports of Mariupol and Berdyansk, or the Ukrainian-held port of Odesa as long as Ukraine “cleared” the waters around it of mines, according to Mr Putin.
Other transport options include the Danube River via Romania, Hungary or Poland, he added.

“But the simplest, the easiest, the cheapest would be exports via Belarus, from there one can go to Baltic ports, then to the Baltic Sea and then anywhere in the world.”

But Mr Putin said any export via Belarus would be conditional on the “lifting of sanctions” by the West against Minsk, allied to Moscow.
Ahead of the talks, which lasted three hours, Mr Sall asked Mr Putin “to become aware that our countries… are victims” of the conflict.
He said it was important to work together so that “everything that concerns food, grain, fertiliser is actually outside” Western sanctions imposed on Moscow after Putin sent troops to Ukraine on 24 February.
In his remarks before the talks, Mr Putin did not mention grain supplies but said Russia was “always on Africa’s side” and was now keen to ramp up cooperation.

“We place great importance on our relations with African countries, and I must say this has had a certain positive result,” Mr Putin added.

Washington and Brussels have imposed unprecedented sanctions against Moscow, pushing Mr Putin to seek new markets and strengthen ties with countries in Africa and Asia.
The Kremlin said the two leaders discussed expanding “political dialogue” between Russia and the African Union as well as economic and humanitarian cooperation.
Speaking to reporters earlier on Friday, Mr Putin’s spokesman said the Russian leader would explain to Mr Sall “the real state of affairs” concerning grain supplies stuck in Ukrainian ports.
“No one is blocking these ports, at least not from the Russian side,” Kremlin spokesman Dmitry Peskov said.

Mr Putin has said Moscow is ready to look for ways to ship grain stuck at Ukrainian ports but has demanded the West lift sanctions.

Russian Foreign Minister Sergei Lavrov is expected in Turkey next Wednesday for talks on creating a “security corridor” to unblock grain exports from Ukraine.
Moscow’s military campaign in Ukraine and a barrage of international sanctions on Russia have disrupted supplies of fertiliser, wheat and other commodities from both countries, pushing up prices for food and fuel.
Cereal prices in Africa, the world’s poorest continent, have surged because of the slump in exports from Ukraine, sharpening the impact of conflict and climate change and sparking fears of social unrest.
The UN has said Africa faces an “unprecedented” crisis caused by the military operation.

Ships loaded with grain remain blocked in Ukraine, which before February was a leading exporter of corn and wheat and alone accounted for 50 per cent of world trade in sunflower seeds and oil.
Navigation in the Black Sea has also been hampered by mines placed by both Russian and Ukrainian forces.
In 2019, Mr Putin hosted dozens of African leaders in Sochi in a bid to reassert Russia’s influence on the continent.
Though never a colonial power in Africa, Moscow was a crucial player on the continent in the Soviet era, backing independence movements and training a generation of African leaders.

Russia’s ties with Africa declined with the collapse of the Soviet Union in 1991 and in recent years China has emerged as a key foreign power on the continent.