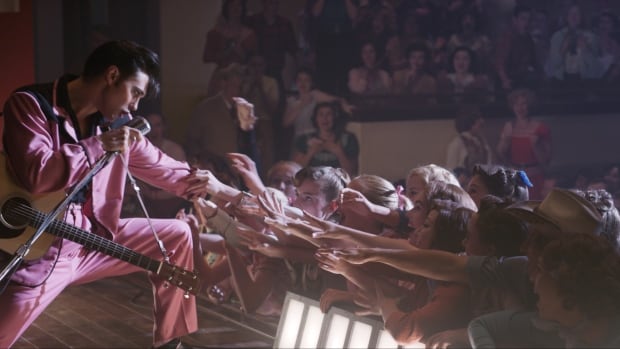 Those are the words wheezed by an ailing Colonel Tom Parker in the opening moments of Elvis, the latest film from the director of Moulin Rouge and The Great Gatsby. The ambitious biopic follows Elvis from a young boy growing up in Tupelo, Miss., right to the legendary rock star’s end.

However, while Baz Luhrmann’s film bears the name of the man in the leather jumpsuit, the person telling us much of the story is Parker, the larger-than-life manager behind the man.

After showing us Parker stumbling around the casino floor about to cash in his chips, the first of many flashbacks whisk us to the early years where we see Parker working at a carnival, managing a travelling group of musicians. Parker calls himself the snowman because of his ability to snow the rubes out of their money. The key, he explains, is finding the right type of “freak show” to sell tickets.

So when Parker hears a young Elvis Presley, the circus has come to town.

With the audacious Australian director Luhrmann behind the camera, every moment is hyper-saturated, drenched in music and memory.

As Parker spies Presley and his family preparing for a radio broadcast, first we watch them singing a spiritual folk song, then we flashback as Presley’s mother talks of how Elvis’ twin brother died (in an animated sequence!). This soon reveals young Presley dressed as the superhero Captain Marvel Jr., simultaneously being drawn to a juke joint blasting blues music, and then a revival tent shaking with a glorious gospel choir.

There Elvis, this one little boy in the middle of the congregation, is overcome. As he shakes to the music the preacher holds back the crowd saying, “Leave him alone, he’s with the spirit.”

It’s a striking moment. One that Luhrmann insists happened. Speaking with CBC News on the red carpet, he said he found a witness to the event who died last year.

“It’s on a video verbatim. He said, ‘Leave him alone. He’s with the spirit.’ So this stuff is real,” Luhrmann said.

As the multi-tiered flashback ends, we’re treated to our first glimpse of Presley the performer. After a taunt from a heckler (“Get a haircut, buttercup”), Presley transforms, his pink two-piece suit gyrating, every thrust loosening squeals from the prim and proper Southern Belles. Luhrmann captures the conclusions as Presley’s pink pelvis churns up the crowd into a frenzy.

This is the freak show of Parker’s dreams. It was about more than Presley’s talent — it was the transgressive nature of his appeal, presenting and popularizing Black music and moves in the still racially segregated South.

What sells the moment isn’t the screams, or Luhrmann’s wild camera angles, but the man stepping into Presley’s two-tone shoes: Austin Butler. With the pout and the pompadour, Butler fits the role of the rock ‘n’ roll icon perfectly. Shaking like a spark plug, he’s got swagger to spare.

But underneath the theatrics, there’s a softness in his eyes, an almost wounded presence.

Speaking with CBC News, Butler says what struck him about the real man, was his complexity.

Actor Austin Butler talks to CBC’s Eli Glasner about playing Presley and his relationship with fans.

“He had this incredibly sensitive, polite side. But then he would go on stage and roll around and spit on the stage like a punk rock. It was all of that,” Butler said.

Underneath the theatrics, Butler conveys a man desperate to sing and connect with fans, a relationship he couldn’t break. “The opposite of addiction is connection. I think it’s a story of connection … because those moments where you’re feeling so much connection and suddenly you’re in an empty room, what do you do with yourself?”

The answer is the familiar cycle of uppers and downers — drugs administered by a doctor led by Parker to keep the King on stage and performing in Las Vegas.

After the meteoric rise, we see Parker and Presley clashing more frequently. First it’s over artistic differences on how to stage a televised comeback special. Then Parker feeds Presley’s paranoia to keep him performing in Vegas instead of touring around the world.

The problem with Parker

After the frenetic energy of Presley’s ascension, the latter third of the film documents the downward spiral. We see Presley increasingly isolated living in his penthouse above the International Hotel, and pulling away from his wife Priscilla, played with sensitivity by Olivia DeJonge.

While Butler imbues Presley with a lived-in vulnerability, the tone clashes with Tom Hanks’ take on Parker. Swaddled by prosthetics and channelling an accent that seems vaguely Transylvanian (Parker was actually from Holland), any gravitas Hanks intends dribbles away.

But Luhrmann is interested in more than documenting the manager’s malfeasance. He also confronts the charges of cultural appropriation that have swirled around Presley since his rise.

The Presley we meet in the film is very much a student of Black culture and in the common parlance, an ally. He bases his flamboyant dressing style on B.B. King (played by Kelvin Harrison Jr.). He hangs in blues bars with Sister Rosetta Tharpe (Yola) and Little Richard (Alton Mason).

As he often does, Luhrmann scrambles the sonics, merging Hip Hop with classic soul. The energy is infectious, but there’s never a whiff of resentment. Instead, an acknowledgement that Presley as a white man will go further than they’ll ever be allowed.

Baz Luhrmann on why Austin Butler was the ideal Elvis

Director Baz Luhrmann talks to CBC’s Eli Glasner about watching Austin Butler’s audition tape and his response to those who accuse Elvis Presley of cultural appropriation.

Luhrmann told CBC News the real Elvis was quick to say, “I’ll never be as good as Fats Domino. I am not the King.” But that it was people like Parker who put the crown on his head to sell records.

Whether or not you consider Presley the King, what comes through is tale of a powerhouse performer trapped in the feedback cycle of sharing their gifts and the love they inspired.

The film ends with a  powerful scene as we see Butler as the old Presley, puffy, sweating, but still crooning to an arena of fans. He sings Unchained Melody as the film segues from the recreation with Butler to the real footage of Presley’s last performance, as he channels all that longing, hurt and desire into the song.

And time can do so much

Are you still mine?

I need your love

I need your love

God speed your love to me

Aftershock in Afghanistan as quake toll rises to 1,150 dead