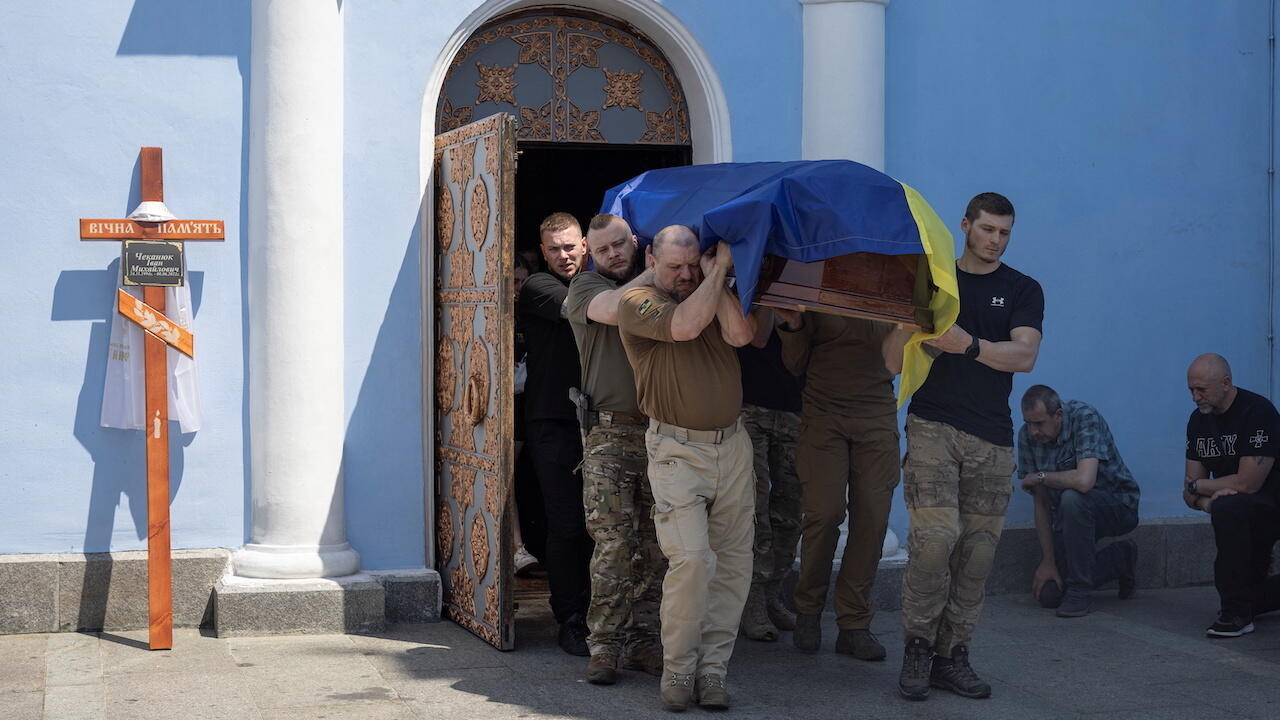 Amnesty International on Monday accused Russia of war crimes in Ukraine, saying attacks on Kharkiv, many using banned cluster bombs, had killed hundreds of civilians. The report came as fierce fighting continued in the eastern Donbas region, with a Russian attack destroying one of the few remaining escape routes from the key city of Severodonetsk. Follow FRANCE 24’s liveblog for the latest updates. All times Paris time (GMT+2).

05:57am: Ukrainians left with one way out of Severodonetsk, as fierce fighting rages

Ukrainian defenders were fighting fiercely for “every metre” of Severodonetsk, President Volodymyr Zelensky said, as Russian forces destroyed a bridge to another city across the river, leaving stranded civilians with just one way out.

Severodonetsk has become the epicentre of the wider battle for control over Ukraine’s eastern Donbas region. Russian forces have taken most of Severodonetsk, having pulverized parts of the city in one of the bloodiest assaults since the Kremlin unleashed its invasion on Feb. 24.

“The key tactical goal of the occupiers has not changed: they are pressing in Severodonetsk, severe fighting is ongoing there – literally for every metre,” Zelensky said in his nightly video address on Sunday, adding that Russia’s military was trying to deploy reserves in the Donbas.

Zelensky said the image of a 12-year-old wounded in a Russian strike was now the enduring worldwide face of Russia.

“These very facts will underscore the way in which Russia is seen by the world,” he said.

Ukrainian and Russian forces were still fighting street-by-street in Severodonetsk on Sunday, the governor of Luhansk province, Serhiy Gaidai, said.

Russian forces have taken most of the city but Ukrainian troops remain in control of an industrial area and the Azot chemical plant where hundreds of civilians are sheltering.

“About 500 civilians remain on the territory of the Azot plant in Severodonetsk, 40 of them are children. Sometimes the military manages to evacuate someone,” Gaidai said.

But the Russians had destroyed a bridge over the Siverskyi Donets River linking Severodonetsk with its twin city of Lysychansk, Gaidai said. That left just one of three bridges still standing.

“If after new shelling the bridge collapses, the city will truly be cut off. There will be no way of leaving Severodonetsk in a vehicle,” Gaidai said, noting the lack of a cease-fire agreement and no agreed evacuation corridors.

“The repeated bombardments of residential neighbourhoods in Kharkiv are indiscriminate attacks which killed and injured hundreds of civilians, and as such constitute war crimes,” the rights group said in a report on Ukraine’s second biggest city.

“This is true both for the strikes carried out using cluster (munitions) as well as those conducted using other types of unguided rockets and unguided artillery shells,” it said.

“The continued use of such inaccurate explosive weapons in populated civilian areas, in the knowledge that they are repeatedly causing large numbers of civilian casualties, may even amount to directing attacks against the civilian population.”

Amnesty said it had uncovered proof in Kharkiv of the repeated use by Russian forces of 9N210 and 9N235 cluster bombs and scatterable land mines, all of which are banned under international conventions.

Cluster bombs release dozens of bomblets or grenades in mid-air, scattering them indiscriminately over hundreds of square metres.

Unguided artillery shells have a margin of error of over 100 metres.

The report details how Russian forces began targeting civilian areas of Kharkiv on the first day of the invasion on February 24.

The “relentless” shelling continued for two months, wreaking “wholesale destruction” on the city of 1.5 million.

“People have been killed in their homes and in the streets, in playgrounds and in cemeteries, while queueing for humanitarian aid, or shopping for food and medicine,” said Donatella Rovera, Amnesty International’s Senior Crisis Response Adviser. “The Russian forces responsible for these horrific attacks must be held accountable.”

Kharkiv’s Military Administration told Amnesty 606 civilians had been killed and 1,248 wounded in the region since the conflict began.

Russia and Ukraine are not parties to the international conventions banning cluster munitions and anti-personnel mines.

(FRANCE 24 with REUTERS and AFP)

Aaron Rodgers fumbles the science on psychedelics. Drugs like ayahuasca can alter the…

They hunkered down in Disney World for Hurricane Ian – this…

After huge success with King & Prince in Japan, UMG…