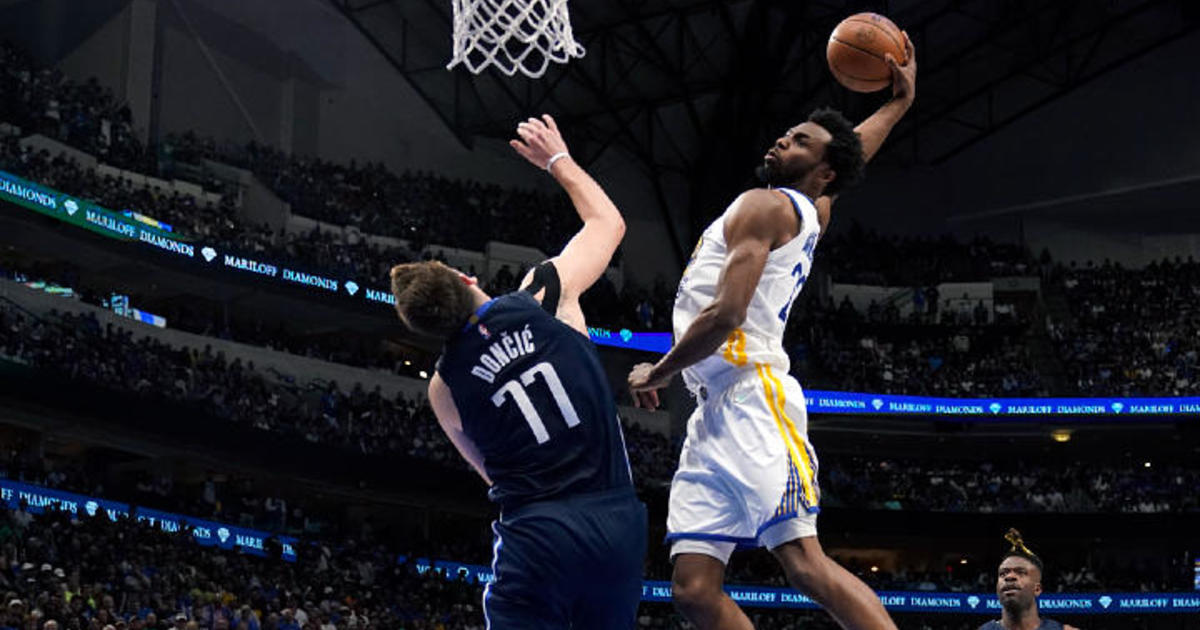 DALLAS (CBS SF) — To put it mildly Golden State Warriors star Andrew Wiggins has silenced his critics this season, but it was a thunderous Game 3, fourth-quarter dunk Sunday night over Dallas star Luka Doncic that put an exclamation point on it.

Wiggins stole the limelight from teammate Steph Curry, scoring 27 points and pulling down 11 rebounds in Golden State’s  109-100 victory, putting the Warriors on win way from advancing to the team’s sixth NBA Finals in eight years.

It even impressed Doncic.

” I mean, I got hit a little bit, but that was impressive, I’m not going to lie,” he told reporters after the game. “I saw the video again, I was like, ooh. That was pretty incredible. I wish I had those bunnies.”

Initially, Wiggins was called for an offensive foul on the play, but Golden State head coach Steve Kerr challenged it and the call was overturned.

“Just feeling the energy,” he said of the play. “You know, that was the main thing when I seen the rim, that’s all I seen. They tried to take it away from me but Steve challenged and we won. Thank him for that.”

Even since Wiggins was the NBA’s first pick in the 2014 Draft, he has been labeled as an underachiever.  Then he arrived to Golden State in the February 2020 trade that sent D’Angelo Russell and two others to Minnesota.

Under Kerr’s coaching and the support of his teammates, Wiggins has flourished.  He was a starter for the Western Conference at this year’s All-Star Game.

“That’s a guy that’s been criticized for being lackadaisical, and the beat goes on, you know, we’ve heard it all, and yet on the biggest stage, he’s come through,” said Warriors star Draymond Green. “I always said, no one talks about teams that guys are on or organizations that guys are in. No one ever talks about that. It’s always the player’s fault. You know, he’s showing that I’m not far off when I say that. So you know, it’s great to see. Absolutely amazing to see him pick up his level of play.”

“I said that at the time of when the trade happen, it was the idea of what he could do to impact games for us,” Curry said. “Defensively, his athleticism, he was a 20-point scorer so he knew how to put the ball in the basket but he would be asked to do it a different way and balance with the rest of the guys. We’ve been preaching that since he joined the team well over two years ago.”

“It’s amazing to see it happen under the bright lights. You don’t know how a guy is going to respond when they are asked to do what we are asking him to do at this stage in the season in the playoffs and you have the highest hopes, and he’s stepping up, and that’s only because of his approach and his attitude and him just being a gamer. What we’re asking him to do is guard the best guy on the other side and make it difficult on him, be aggressive offensively, take what you see, or just don’t rebound the ball.”

“It’s been awesome. Even just his comfort level, to put pressure on the rim, like we don’t have that much vertical threat with the other guys that we have. He can provide that.”