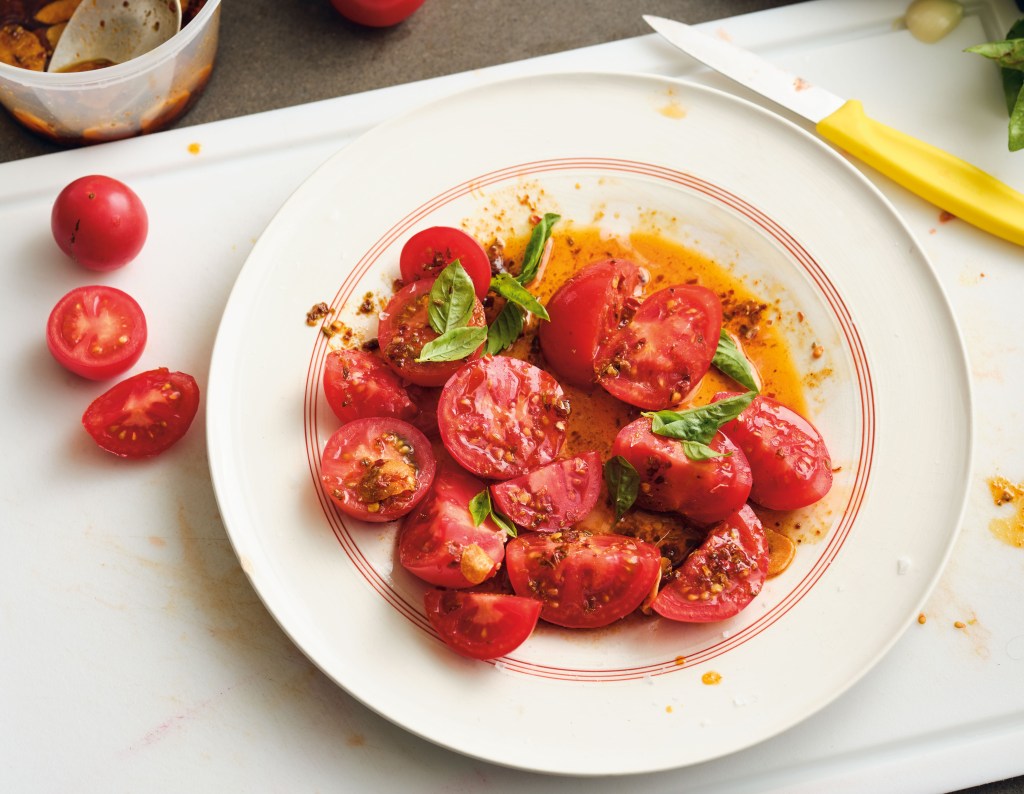 Food writer and recipe developer Andy Baraghani is deeply connected to his East Bay roots. On the phone, the Berkeley native is humble, graciously kind — even to a harried reporter who is late to the interview — and spends a good deal of time talking about how the East Bay not only sparked his interest in food but made him the person he is today.

Baraghani’s cookbook, “The Cook You Want to Be: Everyday Recipes to Impress” (Lorena Jones, $35) is no different. Packed with how-tos for 100 craveable dishes, the highly-anticipated debut also features personal stories about coming of age as a gay Iranian man in Berkeley, where Baraghani enjoyed long Monterey Market sprees with his mom. They always ended with a slice of pizza from the Cheese Board Collective enjoyed on the grassy median, right next to the sign that said not to eat on the median.

His first job — at age 15 — was across the street in the Chez Panisse kitchen under former chef Cal Peternell. He later went to New York — for love and college, but also to work in the test kitchens of Saveur and Tasting Table before joining Bon Appetit as a senior editor and viral video host. His “Andy Makes Kuku Sabzi” introduced legions of fans to the herby Persian egg dish. Five years later, he still gets emails about it.

Last year, Baraghani left Bon Appetit after six years to focus on his cookbook. While he has a reverence for the traditional dishes of his childhood — ash reshteh, saffron-stained chelo with golden tahdig and other Persian dishes are included in the book — “The Cook You Want to Be” is not an Iranian cookbook. It features a wide range of veg-forward, flavor-packed and often unexpected dishes, including simple wonders like Juicy Tomatoes with Italian Chile Crisp and epic entrees like Crushed Orange and Rosemary–Braised Lamb with Crunchy Pistachio Yogurt.

Here’s our chat with Baraghani, who launches his book tour with four stops in the Bay Area.

Q. Not a lot of Persian guys can say they make basmati rice better than their moms. What’s your secret?

A. Truthfully, the only reason I feel confident is because from a young age I watched every meticulous step that she did. And not just her but my aunt and grandmother. There’s reasoning behind each thing you do. All of it — the idea of soaking, rinsing and agitating the rice with your fingers — just ensures that each grain turns out perfect.

Q. How does it feel to see kuku sabzi everywhere? OK, not everywhere. But in several cooking blogs, mainstream cookbooks and some Whole Foods stores.

A. That was the first video I did for Bon Appetit. People still message me about that recipe. It’s traditionally done on the stovetop, but mine starts on the stovetop and is finished in the broiler to get that crisp, dark green top. I have to say I just feel very grateful to even be mentioned as part of the narrative to bring Iranian cusine into the American food discussion. I am certainly not the first. Naz Deravian is amazing. I think Behzad Jamshidi is incredible.

Q. Your story in the book about interning at Chez Panisse read like you were dreaming. And it’s similar to Samin Nosrat’s — another Berkeley Persian teen who walked in the door and asked to work there. Have you guys talked about that?

A. We never worked together. One of my first stories for Bon Appetit was being able to be on location with her. I almost fought to do this story. This was before “Salt Fat Acid Heat.” I had heard stories about her and the idea of meeting another Iranian from the East Bay who loved food was just amazing. I was so nervous around her.

Q. Thank you for your less-is-more approach to gadgets. What are your must-haves?

A. A chef’s knife. A good wooden cutting board and a plastic one for meat. A third one for citrus, too. I love a Y-shaped vegetable peeler. I love a mortar and pestle and a mandoline, too.

Q. Pick one dish in the cookbook that’d you want to have for dinner more than once a week.

A. I eat a lot of rice, so probably the Buttery Nori Rice. Eggs In Spicy Tomato Curry is so good. Mom’s Salmon is also great. It’s low-roasted in one pan with saffron and lots of fresh chard, but it works with any greens you have.

Q. Why did you leave Bon Appetit?

A. I left last August and it was a long time coming. I was so happy to be part of the new change that came with the leadership of Dawn Davis, but it was time. And I just had to finish my book. There were so many opportunities at the time that it was hard for me to balance.

Q. What do you miss most about the Bay Area? How often do you come back?

A. About three times a year. I love the access to nature. I love the smells. The surprise mulberry and loquat trees you find in Berkeley. There’s a sense of calmness that I feel every time I come back. I’m very connected to the East Bay. It has shaped not just my cooking but my morals.

Q. And what’s your hope for this book?

A. I want people to fall in love with the recipes and incorporate them into their life. But my intention is to make them go one step further. If they learned more about a new ingredient, technique or cultural context of a dish that they can apply to their time in the kitchen, that will make me happy.

Food writer Andy Baraghani is making four stops on the Bay Area leg of his book tour for “The Cook You Want to Be: Everyday Recipes to Impress” (Lorena Jones, $35), including a signing at Chez Panisse. Baraghani will return in August, popping up at The Anchovy Bar in San Francisco on Aug. 10 and doing a chef-in-residence stint at Scribe Winery in Sonoma on Aug. 13.

May 28: Book signing, demo and Q&A at noon inside the Foodwise Classroom (under the tents in front of the Ferry Building), 1 Ferry Building, San Francisco. Free. https://cuesa.org/event

June 3: Book signing on the front patio from 4 to 5 p.m. at Chez Panisse, 1517 Shattuck Ave., Berkeley. Menus for the evening in the cafe and the restaurant will be inspired by the cookbook. Space is limited and reservations are required. www.chezpanisse.com

For more food and drink coverage
follow us on Flipboard.