Apple announces macOS 13 Ventura, the next major software update for the Mac 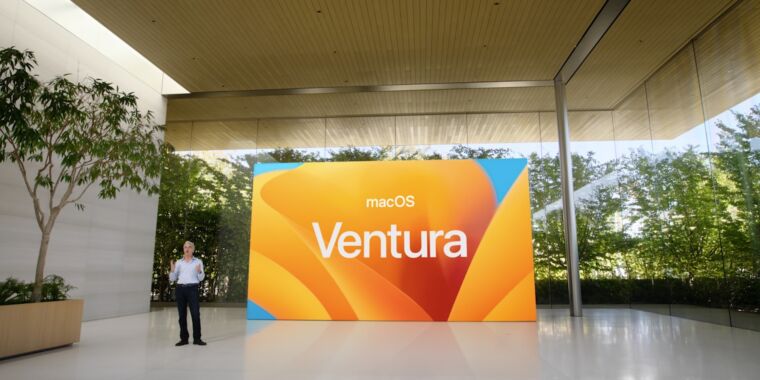 CUPERTINO, Calif.—As expected, Apple has used the stage at its WWDC 2022 keynote to reveal the features and changes coming to macOS in the next major software update for the platform, macOS 13 Ventura.

Ventura’s headlining feature is a new multitasking interface called Stage Manager. It’s being billed as a way to fight window clutter on a busy desktop—enter Stage Manager mode, and one of your windows floats to the center of the screen, pushing your other windows into a compressed navigation column on the left of the screen. Click a different app window on the left, and it will fly to the center of the screen, knocking the app you were using before into the navigation column.

Spotlight also gets some handy quality-of-life updates, adding the ability to Quick Look search results directly from the Spotlight window, and the ability to run Shortcuts from within Spotlight. Safari picks up the ability to share groups of tabs with other users, letting all users add and remove tabs. The browser is also adding a FIDO-compliant security technology called PassKeys, which aim to replace passwords with cryptographically generated keys that sync between devices using iCloud Keychain. Sites that support PassKeys can be opened using TouchID or FaceID.

Apple’s cross-device Continuity features were also updated. FaceTime calls can be handed off seamlessly between different Macs and iDevices, while Continuity Camera allows you to use an iPhone as a webcam (your iPhone’s LED can even be used as a makeshift ring light). Continuity Camera supports Center Stage and Portrait Mode effects, too, though presumably they will require newer iPhones with hardware that supports those features.

Other features include a redesigned System Preferences app, now called Settings, that brings it more in line with the Settings app in iOS and iPadOS. The Messages app also picks up new features Apple added to iOS 16, including the ability to edit and unsend recently sent messages, and a mark-as-unread feature for message threads.

macOS 13 Ventura will launch later this year. The first beta should be available to developers today, and a public beta will follow in the next few weeks.

Apple’s WWDC keynote is ongoing, and this article will be updated with new details as we have them. You can follow along in real-time with our liveblog here.

How to work your 9-5 job while travelling

Neighborhoods in San Diego with the most expensive home sales