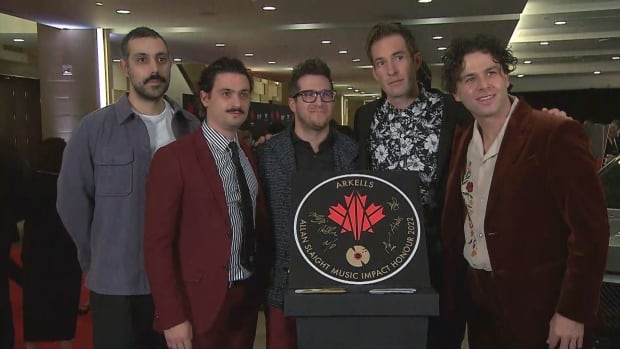 Canadian band Arkells and late CBC journalist Barbara Frum are among this year’s inductees to Canada’s Walk of Fame.

Canada’s Walk of Fame is a national not-for-profit organization that’s grown from honouring inductees with engraved sidewalk stars in Toronto’s Entertainment District to a yearlong national series of programs and celebrations.

The Arkells — widely considered one of the most passionate, exuberant and in-demand live bands working today — received the Allan Slaight Music Impact Honour award. The group started on Jan. 1, 2004 in Hamilton, Ont.

Barbara Frum was one of Canada’s most respected and influential journalists. Raised in Niagara Falls, Ont., she began her career in journalism as a freelance writer and commentator for CBC radio soon after graduating from the University of Toronto.

She died in 1992 of chronic leukemia. She was 54. Her career spanned decades at the CBC, and her legacy continues as the voice that shaped As It Happens.

Retired CBC journalist Peter Mansbridge says Canada’s Walk of Fame is a good occasion to celebrate people who have made a difference — including Frum, with whom he shared the hour of The National and The Journal.

“We did a lot of big shows together, everything from royal weddings to the repatriation of the constitution in 1982,” he recalled.

“She was the consummate professional, an amazing person, not only as a friend but as a journalist.

“We all learned from her and I think it’s great that she’s being honoured tonight. You might argue it has taken too long to do this for her but I’m really happy that I’m being able to be a part of it,” Mansbridge added.

Each year, Canada’s Walk of Fame celebrates Canadian excellence and achievement in the areas of arts and entertainment; entrepreneurship and philanthropy; humanitarianism; science, technology and innovation; and sports and athletics.

Walk of Fame CEO Jeffrey Latimer says their mission has moved from one of just celebrating celebrities, to one of celebrating greatness, finding ways to tell their stories and unpacking their incredible journey to inspire others.

“Why did Barbara Frum change the face of broadcasting, what was behind that incredible life?” Latimer said.

“How did Lionel Conacher truly win at five sports, what was his life about? Just for Laughs — these are amazing organizations, amazing people.”