As a spy thriller, ‘All the Old Knives’ is sadly dull 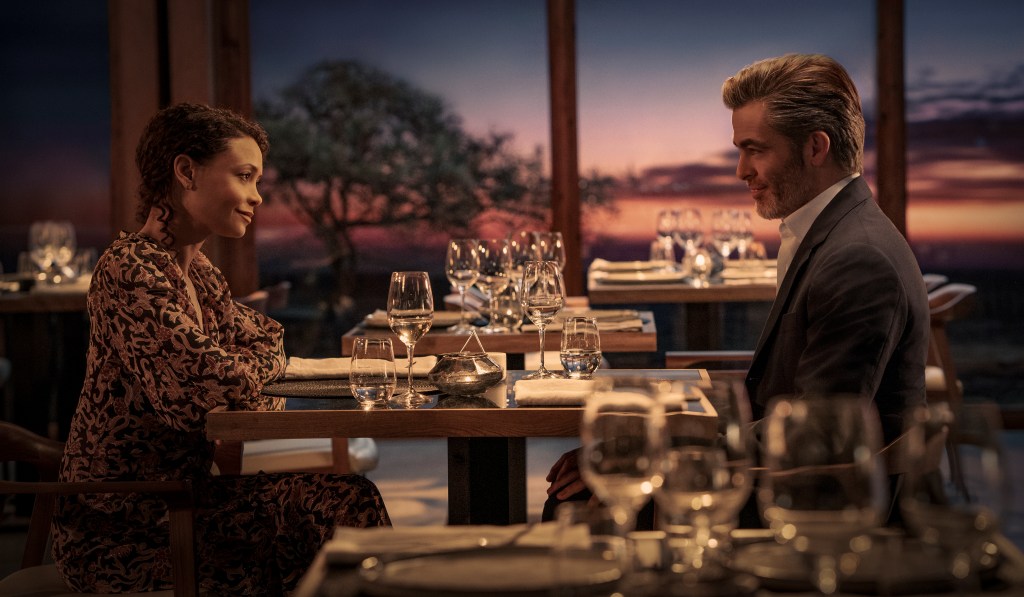 “ALL THE OLD KNIVES”

It turns out “All the Old Knives” is just dull. A John Le Carre-like spy story set in Vienna and London, but mostly in a chic restaurant in Carmel-by-the-Sea, the film begins with a 2012 terrorist hijacking of a plane with 120 people aboard in Vienna (the film was shot in London and California).

At the U.S. Embassy in Austria is a CIA station headed by a man named Vick Wallinger (Laurence Fishburne). Also at the station are higher-up Bill Compton (Jonathan Price), jittery cyber pro Owen Lassiter (David Dawson), dashing Henry Pelham (Chris Pine, also an executive producer) and the beautiful Celia Harrison (Thandiwe Newton). Henry and Celia are also lovers. Vick assembles his team to save the passengers. They discover that they have an agent aboard. The agent contacts them to feed them information.

The Austrian authorities plan to storm the plane. Henry has a Chechen source named Ilyas Shushani (a very good Orli Shuka), a baker who has a wife and 6-year-old daughter. We learn much about the hijacking in flashbacks, while Henry and Celia, who is someone else’s wife in the 2020 present time and a mother with two children, meet in Carmel-by-the-Sea for a long meal with lots of California wine on the menu. Their meeting is also an interrogation.

Based on the 2015 novel by award-winning American writer Olen Steinhauer (TV’s “Berlin Station”) and adapted by him, “All the Old Knives” makes most of the spy-game chessboard moves you expect from a Le Carre or Len Deighton tale. But it never builds up a head of emotional steam, and at one point I wondered if the whole film was set in that restaurant and that everything else was a flashback. The direction of Danish filmmaker Janus Metz (“Borg vs. McEnroe”) is sluggish. Pryce and Fishburne, two fine actors, are marooned. The cat-and-mouse goings on have little dramatic weight.

In 2012 scenes, Vick determines that there is “a mole in our station.” That, of course, is the dilemma in “Tinker, Tailor, Soldier, Spy.” But that novel and the film adaptations of it have been so much more gripping. Pine, who speaks Arabic in some scenes, and Newton have chemistry, and flashbacks to their lovemaking in Vienna are steamy. But the plot is a boring, gloomy labyrinth. Who is the mole? For a while I hoped maybe I was, if I could get it to end sooner.

The music by Jon Ekstrand and Rebekka Karijord is a nice mix of romance and suspense. Pine, who is graying in the present-day scenes and not at all gray in the 8-year-old Austrian flashbacks, tries to order the James Bond favorite, a vodka martini, but is told the restaurant serves only wine. The film is weak stuff, too.

Tesla Will Sell Its Cybertruck Next Year, Elon Musk Says