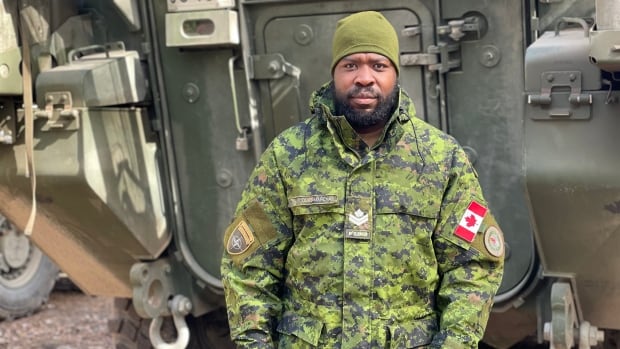 When Master Cpl. Josaphat Nicolas-Marchal arrived for his deployment at the Adazi military base in Latvia in December, Western intelligence officials had just started warning that Russia could be poised to invade Ukraine.

Now four months into the soldier’s rotation, NATO is trying to deter Russia from launching additional offensives and is bolstering the number of troops deployed in eastern Europe.

“It is very different for us, because now we are close to what is happening,” said Nicolas-Marchal, who is normally stationed at CFB Valcartier in Quebec but has served previously in NATO missions in Poland and Iraq.

“Whatever happens can happen in Ukraine — or around the world,” he said. “We can keep training together and be ready if someone sends us somewhere.”

The master corporal is one of approximately 700 Canadian troops stationed at Camp Adazi, a Western alliance military base and training range that’s located 25 kilometres outside Riga, Latvia’s capital.

Canada’s military presence in the country grew last month when an artillery battery consisting of 120 troops and guns arrived from Quebec.

Given the heightened security threat, Canada has extended its Latvia mission indefinitely. Latvia’s ministry of defence told CBC News that the government is hoping to strengthen the contingent even further and develop it as a true “war-fighting unit.”

But as Latvia looks to bolster its defences, not everyone living close to the base feels reassured by the growing number of troops — with some fearing it could make the region a bigger target for Russian aggression.

When CBC News visited the base on Monday, dozens of Canadian soldiers were taking part in weapons training. In one area, soldiers fired high-powered rifles at targets in close range, trying to simulate battle in an urban environment like a city street or inside a building.

Canada has the largest contingent in Latvia, but around 800 other troops from 10 different NATO countries are stationed there, too, including soldiers from the Czech Republic, Spain and Slovakia.

“It means a lot for us to be here to be contributing to the ongoing situation that is evolving in Ukraine,” said Major Anne Pham, commander of the newly deployed Phoenix battle group in Latvia.

That meeting came a few weeks after Prime Minister Justin Trudeau toured the Latvian base where he officially announced that Canada was extending its contribution to the mission beyond 2023, when it was set to expire.

Prime Minister Justin Trudeau announced the renewal of Operation Reassurance one year before it was scheduled to end during his visit to Latvia. 1:11

NATO has four multinational battle groups spread across eastern Europe and recently announced that forces will be deployed in four more countries — Slovakia, Hungary, Bulgaria and Romania — to try and prevent the war from spilling over into Ukraine’s neighbours.

In the municipality of Adazi, a community of 12,000 that borders the base, those who live there can sometimes hear artillery being fired during practice exercises.

Residents who spoke with CBC News near the centre of the town gave differing views on the burgeoning NATO mission.

Some expressed fear the additional troops could provoke Russia.

“If NATO is going to get involved, we have no idea what will happen to us here,” said Adazi resident Ligita Voitkane. “It’s not just the base that will suffer, our whole little town here, too.”

WATCH | Some in Latvia fear country could be dragged into a larger war:

Canadian troops train for battle in Latvia amid Russian threat

Hundreds of Canadian soldiers deployed to Latvia are preparing to defend NATO territory over fears Russia could attack the Baltic states. Not everyone is convinced their presence will deter Russian forces, pointing to Latvia’s unprotected border. 2:08

Ksenija Gontiare, a mother pushing her nine-month-old in a stroller, also said the NATO presence made her uneasy.

She has relatives in Kyiv, but she said she is still concerned about the billions of dollars of weapons being shipped from NATO countries into Ukraine, as she worries it could lead to an escalation of violence.

On Tuesday, a Kremlin-backed media outlet quoted Maria Zakharova, the spokesperson for Russia’s foreign ministry, as saying that the European Union has turned into an “aggressive NATO war machine.”

But Adazi resident Victoria Zelca believes Russia may decide to invade Latvia — and said she feels comforted knowing the base is nearby.

“We are a neighbour country and we can be included in the war,” she said. “They want land … there is the Baltic sea, which they could use for transport and deliveries.”

Three picks for the RBC Heritage including 100/1 shot