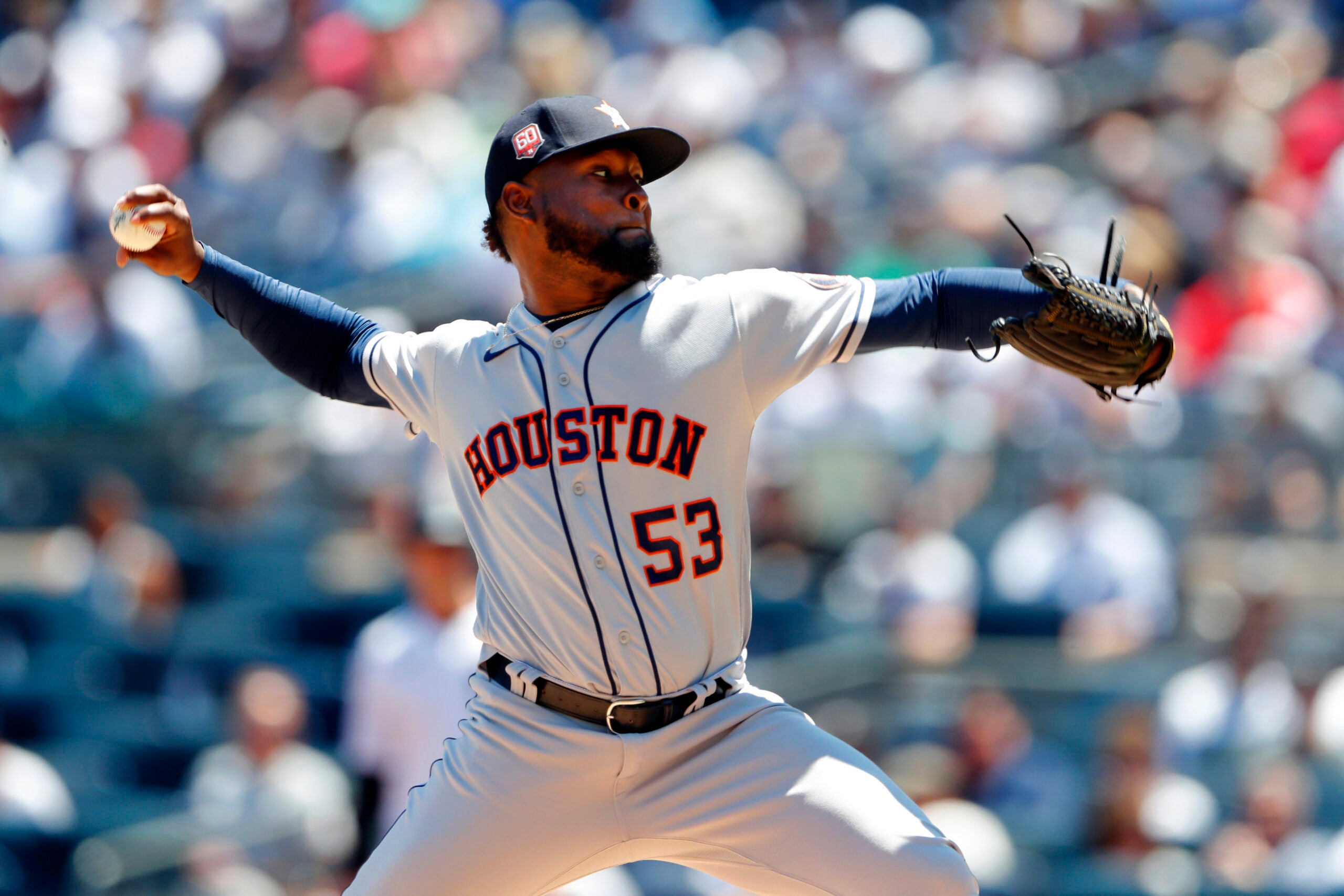 NEW YORK (AP) — Cristian Javier, Héctor Neris and Ryan Pressly combined on the first no-hitter against the New York Yankees in 19 years, shutting down the best team in baseball and pitching the Houston Astros to a 3-0 victory on Saturday.

Javier (5-3), a 25-year-old right-hander without a complete game in 84 professional starts, was clearly tired when manager Dusty Baker brought in a reliever to start the eighth. Javier set career highs for strikeouts (13) and pitches (115), and he matched his longest start with seven innings.

Pressly, who gave up a tying three-run homer to Aaron Hicks in a 7-6 loss Thursday night, retired three straight batters in the ninth for his 15th save in 18 chances. After Giancarlo Stanton hit into a game-ending groundout, the Astros walked onto the field and gathered near the mound for a brief celebration.

“To do it in New York, it’s the best feeling in the world,” Pressly said.

Rookie J.J. Matijevic gave Javier a lead in the seventh when he hit his second big league homer, driving a fastball from Gerrit Cole (6-2) into the right-field second deck. Jose Altuve homered into the left-field second deck in the eighth against Michael King, and pinch-hitter Yuli Gurriel added an RBI single off Lucas Luetge in the ninth.

In a matchup of the teams with the top two records in the American League, New York didn’t come close to a hit before a silenced crowd of 45,076. The major league-best Yankees lost consecutive games for the first time since May 28-29 against Tampa Bay, getting their only runners on three walks and an error.

Javier, who lowered his ERA to 2.73, was starting because Jake Odorizzi is hurt. Javier began 12 of his first 18 batters with a strike but started his last five with a ball. His 50.9% first-strike percentage entering was 155th among 157 pitchers who faced 150 or more plate appearances this season.

“I feel really happy, really proud right now for this moment that God has given me,” Javier said via interpreter.

He walked Josh Donaldson on a full-count fastball with two outs in the first, then retired 17 in a row until Donaldson reached when third baseman Alex Bregman threw past first for an error on a one-out grounder in the seventh. Stanton took a called third strike and Gleyber Torres struck out swinging.

Neris walked two in the eighth, then retired Joey Gallo on a flyout to the right-field warning track and got Aaron Judge to ground into an inning-ending forceout.

The no-hitter was the third in the major leagues this year after five New York Mets combined against Philadelphia on April 29 and Reid Detmers of the Los Angeles Angels accomplished the feat against Tampa Bay on May 10.

Houston’s no-hitter was its 14th, the first since Justin Verlander against Toronto on Sept. 1, 2019.

Martín Maldonado caught his second combined no-hitter with Houston — he also guided four pitchers through a gem against Seattle on Aug. 3, 2019.

“Trust Maldy,” Pressly said. “A lot of people don’t get to see the preparation that Maldy and (back up Jason) Castro put in. It’s bar-none to anybody out there.”

New York was no-hit for just the eighth time. Houston had been the previous team to do it, across the street at the old stadium on June 11, 2003. Roy Oswalt strained his right groin after his second pitch of the second inning, and Pete Munro (2 2/3 innings), Kirk Saarloos (1 1/3), Brad Lidge (two), Octavio Dotel (one) and Billy Wagner (one) followed in an 8-0 win.

Matijevic, a 26-year-old taken by Houston in the second round of the 2017 amateur draft, debuted April 22. He is 2 for 14 and both hits are solo home runs; he went deep against Michael Kopech of the Chicago White Sox on June 19.

Cole didn’t allow a hit until Jake Meyers grounded a slider into right field with two outs in the fifth. In his previous start, Cole held Tampa Bay hitless until Isaac Paredes’ single leading off the eighth on June 20. The 31-year-old right-hander took a perfect game into the seventh against Detroit on June 3 before Jonathan Schoop’s two-out single.

Yankees manager Aaron Boone said he addressed Donaldson flipping his bat into Castro and not running immediately on a ball that went for a ground-rule double Friday.

“We kind of looked at each other,” Boone said. “JD plays his butt off. So yeah, anytime a guy hits a ball and does something, it doesn’t go out, yeah, you kind of look at that and address it. But my biggest thing is, are my guys playing their butt off? And JD is a guy I have no issue with.”

Yankees: After throwing an eight-pitch inning for Double-A Somerset on Friday in his first game action since May 22, LHP Aroldis Chapman (left Achilles tendinitis) expects to pitch again Sunday and then come off the IL. … RHP Jonathan Loaisiga, sidelined since May 22 by right shoulder inflammation, threw his first bullpen since getting hurt. He will need another bullpen and then batting practice before he goes on a rehab assignment, Boone said. … Domingo Germán (right shoulder impingement) is to make his second minor league rehab start on Tuesday.

DR ELLIE CANNON: I fear the menopause revolution has led some women to take HRT they don’t need