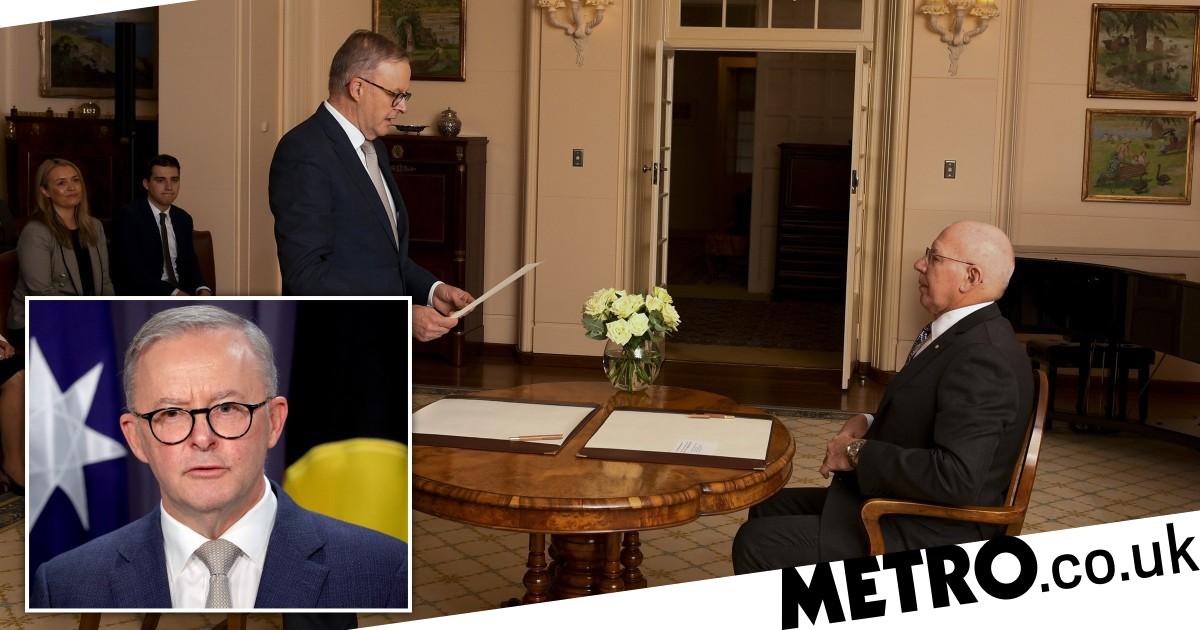 Australia’s newly elected prime minister has formed a new government, after an election brought an end to nearly a decade of conservative rule.

Questions have since been raised whether the new leader will look to remove the Queen as the country’s head of state.

His pro-republic manifesto doesn’t include any plans for a referendum, but an anti-monarchy organisation in Australia claimed the idea could be on the cards.

‘Won’t be a referendum just yet as they’re rightly committed to first recognising Aboriginal people as the original Australians in the constitution. But a republic will happen.’

Mr Albanese, 59, was sworn in as the 31st prime minister along with four senior party members.

His first task is to head to Tokyo to attend a ‘Quad’ summit with US president Joe Biden and the prime ministers of Japan and India.

After tipping prime minister Scott Morrison out of office, he referred to his humble upbringing in the inner-Sydney suburb of Camperdown while thanking voters for making him their leader.

In a speech, he said: ‘It says a lot about our great country that a son of a single mom who was a disability pensioner, who grew up in public housing down the road in Camperdown, can stand before you tonight as Australia’s prime minister.

‘Every parent wants more for the next generation than they had. My mother dreamt of a better life for me.

‘And I hope that my journey in life inspires Australians to reach for the stars.’

His party, which was helped by unprecedented support from the Greens and climate-focussed independents, was four seats short of a majority of 76 seats as counting after Saturday’s election continued.

Official results could take days, with counting of a record 2.7million postal votes beginning on Saturday.

In this election, the country’s first since 2019, the cost of living was a major factor in influencing votes.

Climate change has also been a key concern for Australians, with a large number of devastating bushfires and floods.

In Australia, everyone aged 18 and over has to register to vote, if a person fails to do so, it can result in a fine or even a day in court.

Locals were spotted in swimming attire as they cast their vote between trips to the beach or pool.

Many were rewarded with so-called ‘democracy sausages’, a well-known offering of tasty food grilled outside polling stations to entice voters.

The outgoing Mr Morrison issued an emotional farewell during his speech on Saturday.

He said: ‘In this country, at a time like this, when we look around the world, and particularly when we see those in the Ukraine fighting for their very freedom and liberty, I think on a night like tonight we can reflect on the greatness of our democracy.’

He added: ‘This has been a time of great upheaval over these past few years. And it has imposed a heavy price on our country and on all Australians.’

Super Saturday of fixtures in Mzansi