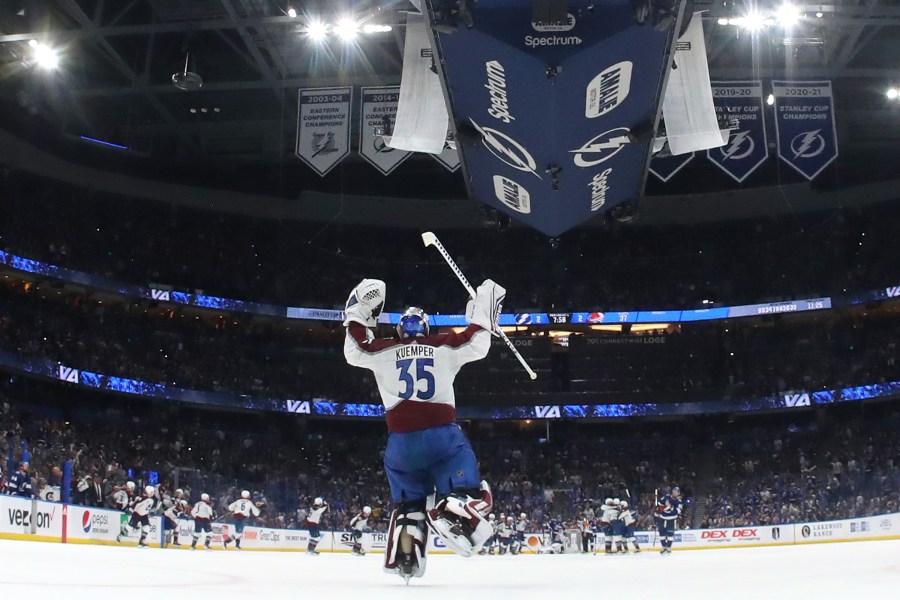 It has been 21 years and 15 days since the Colorado Avalanche won the Stanley Cup. They have three chances to do it again, starting with Friday night at Denver.

Colorado leads the Stanley Cup Final 3-1 after beating the Lightning 3-2 in overtime at Tampa Bay on Wednesday night on what Lightning coach Jon Cooper said was a goal that shouldn’t have counted.

Now his team has to climb out of a big hole — and win two road games — to capture its third straight title.

It is a tough task that has been made even harder with injuries. Brayden Point, who didn’t play in Game 4, is likely out for Game 5 and Eric Cernak didn’t play much Wednesday, leaving Tampa Bay with just five defensemen most of the game.

It’s official: Wear your burgundy and blue on Friday

Cooper did not have an update on injuries as of Thursday afternoon.

The Lightning are not ready to concede the title to the Avalanche despite the two-game hole.

“We haven’t lost yet,” Tampa Bay forward Pat Maroon said. “It’s the first one to four wins right now. We’ve got a challenge in front of us, but if it’s one team that can do it, it’s this team.”

Avalanche on the brink of a title

The Lightning are facing elimination after Colorado had a few fortunate bounces in Game 4. The first Avalanche goal went off Nathan MacKinnon’s skate and the tying goal in the third period bounced off Andrew Cogliano’s leg.

Then there was the overtime goal, which Cooper thought happened with Colorado having six skaters on the ice. MacKinnon was skating toward the bench when Nazem Kadri jumped on the ice and scored the winner seconds later.

“It’s impossible to say what’s the right decision there,” Tampa Bay forward Ryan McDonagh said. “It’s so fast and it probably happens a million times a game more than we think.”

The Avalanche are on the brink of a title, in part because of key lineup decisions. Coach Jared Bednar stuck with Darcy Kuemper in net and he came through with 37 saves Wednesday, and he put Kadri in the lineup for the first time since June 4.

Byram was the one player who was certain Kadri’s shot went in despite confusion on the ice. The puck went under Andrei Vasilevskiy’s right arm and lodged in the top of the net, giving Colorado a dramatic win.

“I’ve been waiting for this my whole life,” Kadri said. “I figured it was time to join the party.”

The party will be big if the Avalanche can close it out on home ice Friday night. They are 7-2 at home in the playoffs, with both losses coming in the second round against St. Louis.

Colorado knows it can’t let up despite the 3-1 series lead. Andre Burakovsky is likely out for Friday, and despite his heroics, Kadri’s surgically repaired thumb is not 100 percent.

“They’re going to bring their best and we need to do the same thing,” Avalanche captain Gabriel Landeskog said of the Lightning. “It’s obviously exciting to get a big win on the road in overtime, but we have a big day of rest (Thursday) and get ready for Friday.”