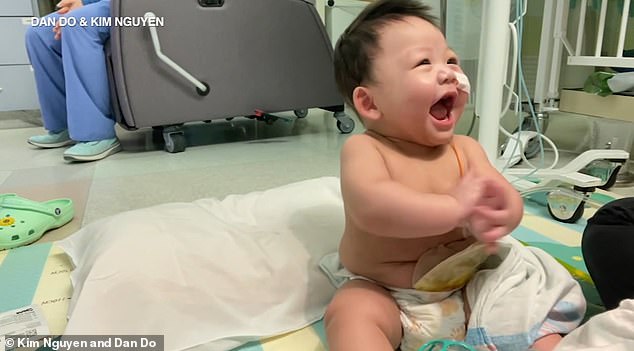 A baby who suffers from a rare genetic condition causing his intestines to swell and fill with fluid has been discharged from hospital just in time for his first birthday.

Max Do, from Park Ridge, in Chicago, was born by emergency caesarean at 31 weeks after doctors noticed his abdomen was becoming bloated in the womb.

He was immediately rushed to the intensive care unit at Advocate Children’s Hospital where doctors diagnosed him with congenital sodium diarrhea — when the body struggles to remove salt from the intestines leading to a watery build up.

The baby then spent 11 months in the wards where he had four operations to ease the condition, including one which left him ‘almost unconscious’ for a week.

His parents, Kim Nguyen and Dan Do, 37, — who visited their son every day — feared they would lose him. But as his health improved Max started to become ‘very excitable’ and ‘wave at everyone’, earning him the nickname ‘Mayor of the NICU’.

He was finally allowed to go home last month just in time for his first birthday, which was spent at home with family. He also got to meet his sister Ivy, six.

Congenital sodium diarrhea is a very rare condition, with less than 50 cases known worldwide. It can be triggered by a range of genetic mutations, with Max being the ‘only person in recorded history’ to have his specific changes.

Sufferers need round-the-clock hospital care in the first few months to prevent dehydration, but doctors say they can go on to lead a normal life.

Max Do, 1, spent 11 months in the emergency ward at Advocate Children’s Hospital in Park Ridge, Illinois, after he was diagnosed with a condition that left him unable to absorb salts 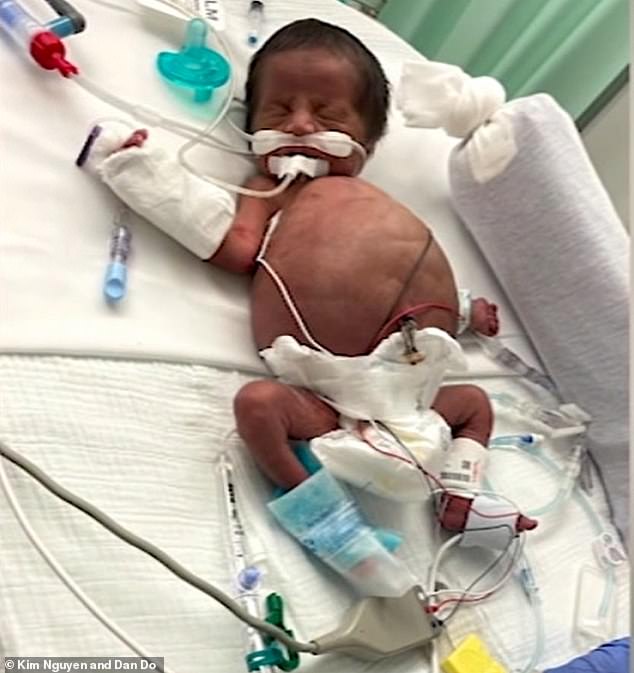 Pictured above is Max when he was born. His stomach is distended because the genetic mutation has left him unable to absorb salts, leading to a build up of fluid 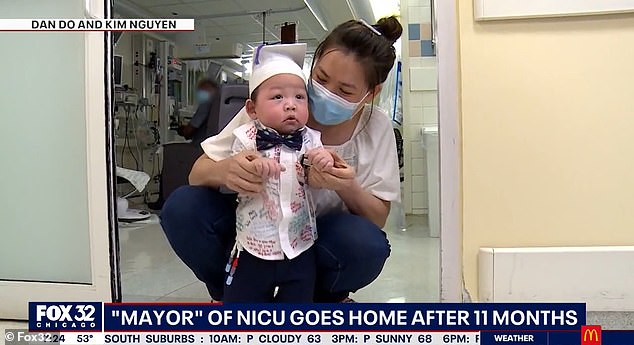 But after months of treatment he was finally able to be discharged and walk out of the ward (pictured). He captured hearts while there for being ‘very excitable’ and ‘constantly waving’ at everyone 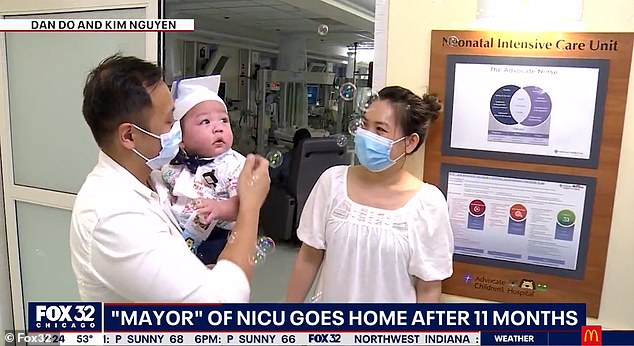 Max was able to spend his first birthday at home with his family. He has also now being allowed to meet sister Ivy, six, for the first time

‘When [Kim] was pregnant, we saw [in] the ultrasound that Max’s stomach was already getting distended, and they saw that amniotic fluid was not going in and out of Max the way it should be and, as a result, Kim’s stomach was getting bloated up, really rapidly,’ he explained.

What is congenital sodium diarrhea?

Normally, the body absorbs salt from the intestines.

But in congenital sodium diarrhea the channels responsible for this don’t work because of a genetic mutation.

Symptoms include a large distended belly before birth and constant watery stools.

Doctors say in the first few months of life babies with the condition need constant monitoring to ensure they stay hydrated and have enough salts.

But as they get older it is possible for them to be discharged, and receive salts via an intravenous drip at home.

Doctors say most patients will go on to lead a normal life.

The condition is extremely rare with only about 50 cases known to date.

After their son was delivered, Do said it felt like ‘surgery after surgery’.

‘There was a point where we thought we were going to lose him because so many procedures had been done.

‘And he was, I think, almost unconscious for one week. One week he was just on morphine and was just sleeping, trying to recover from the surgeries.’

Dr Michael Chapello, a neonatologist and vice chairman of pediatrics at the hospital who was helping with Max’s care said when he was born his abdomen was ‘very distended’.

‘That usually means that there’s a bowel obstruction of some sort.

‘He did have surgery to look at that… but as it continued to be distended — that was because there was so much fluid going in there — we realized that we needed to evaluate exactly why.’

Swelling in the abdomen area is usually triggered by a blockage stopping fluid flowing away from the area.

But blood tests eventually revealed Max was in fact suffering from a genetic condition that was triggering the illness.

Chapello said: ‘He took every curveball thrown at him and he knocked it right out of the park.’

While on the ward, Chapello added that youngster tended to ‘command a lot of attention’ because he was always a ‘very excited little guy.

‘He always wants to say hi, he waves, he smiles and it’s hard not to go over and say hi to him, even when you’re not taking care of him at the moment.’

Max finally walked out of the ward on May 23 when he was 11 months old, which ‘rarely happens’ doctors said.

It was just in time for his first birthday on June 4, which was celebrated at home with his family.

But in Max’s case these are mutated, meaning they are not able to remove the salts which in turn leads to a build up of fluids. 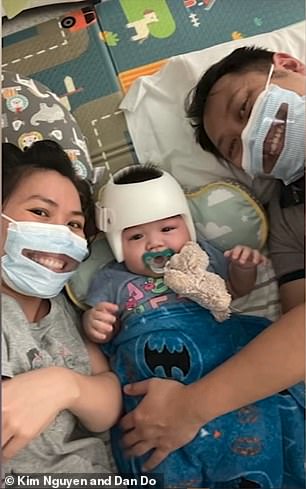 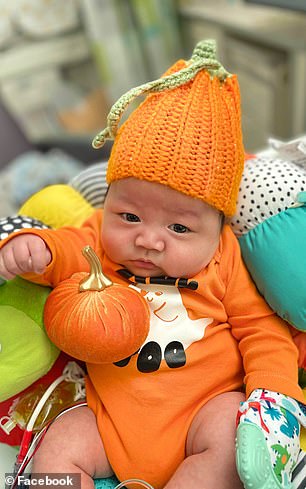 Parents Kim Nguyen and Dan Do say they came to the emergency ward every day to see their son. There were times when they feared they would lose him because of all the surgery 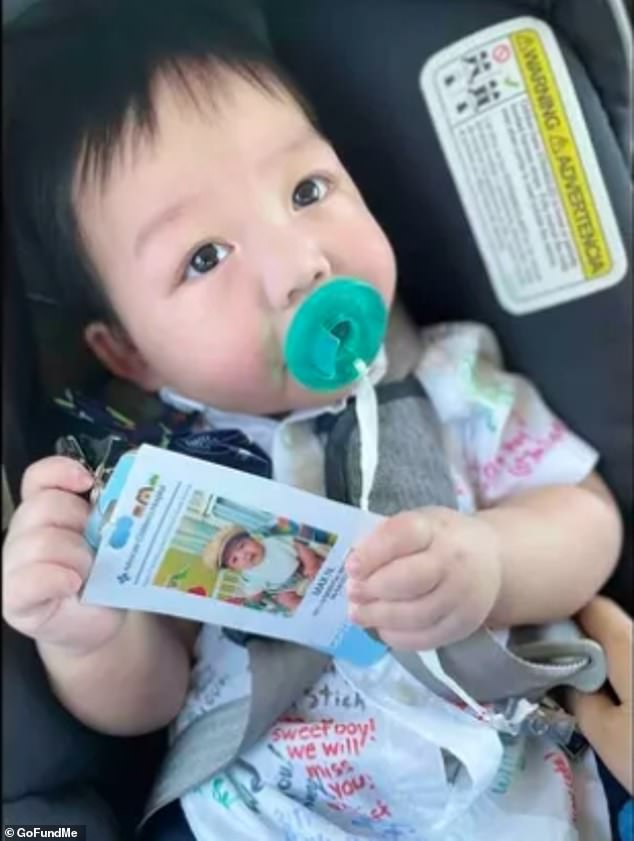 Max still requires an intravenous drop to maintain his blood salt levels and ensure he doesn’t become dehydrated, but doctors say he can expect to lead a normal life

Doctors say babies born with the condition immediately have watery diarrhea, even in the absence of being fed.

They require care in hospital for months afterwards to stop them becoming dehydrated and ensure the babies are receiving enough salt — which is essential for normal bodily functions.

Once discharged, they continue to require an intravenous drip to receive salt.

But doctors say although individuals affected will likely continue to have ‘mild watery diarrhea’ they otherwise ‘tend to lead a normal life’.