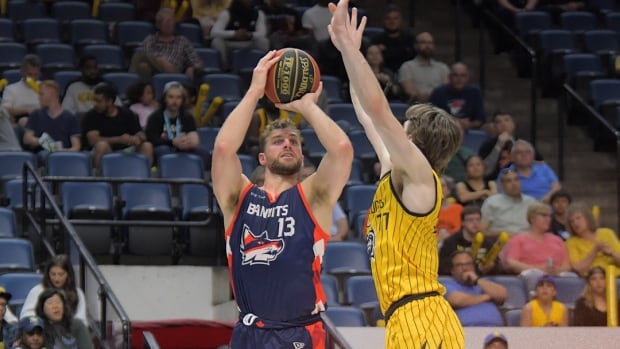 The Fraser Valley Bandits continued their perfect season-opening road trip after Thomas Kennedy delivered two clutch free throws in a 71-70 win over the Honey Badgers at FirstOntario Centre in Hamilton on Friday night.

The Bandits hit a road block after scoring 69 points — just two shy of the game-winning total of 71 as set by the CEBL’s Elam Ending rules — committing multiple turnovers before the former Honey Badger Kennedy scored his 11th and 12th points of the night to ice the game. Kadre Gray led the team with 17 points and six assists.

The Bandits began their season with a 90-87 win over the BlackJacks in Ottawa on Wednesday, and will next head West to the SaskTel Centre on Wednesday to end their road trip against the Saskatchewan Rattlers.

The Honey Badgers, who opened their season with an 80-72 victory over the Montreal Alliance on Wednesday, erased an 11-point deficit in the fourth quarter, taking the lead with just under five minutes left.

Hamilton fell just shy of victory, as Caleb Agada was sent to the line tied at 69. The guard from Burlington, Ont. — who finished with 10 points, seven rebounds and seven assists — only managed to sink his first of two free throws, opening the door for Fraser Valley.

Hamilton will be back in action on Thursday as they close out their homestand against the Guelph Nighthawks.

The Niagara River Lions dealt the Edmonton Stingers an 86-74 defeat at the Edmonton EXPO Centre on Friday night, matching the number of losses the back-to-back champions had in all of the 2021 season.

River Lions guard Khalil Ahmad poured in a game-high 22 points — including two free throws to close out the game — and a team-high five assists as Niagara built up a sizeable lead entering the final frame, outscoring Edmonton 51-32 in the second and third quarters.

Edmonton was without key players Marlon Johnson and Calgary’s Mathieu Kamba, in addition to three-time CEBL MVP and now Los Angeles Clippers guard Xavier Moon, who was honoured before the game.

The Stingers were led in scoring by Edmonton’s own Aher Uguak, who potted 20 points, while another Edmonton native in Jordan Baker led the game in rebounds (12) and assists (six).

The Stingers will have a quick turnaround and be back in action on Sunday in Edmonton against the Saskatchewan Rattlers, while the River Lions will travel to Guelph on Tuesday to take on the Nighthawks.

In Shanghai lockdown, some residents demand release and get it

Woman tormented by memories of unhappy past

Amsterdam is cracking down on ‘nuisance tourism’…