Bank of England raises rates for a fifth time, to 1.25 percent. 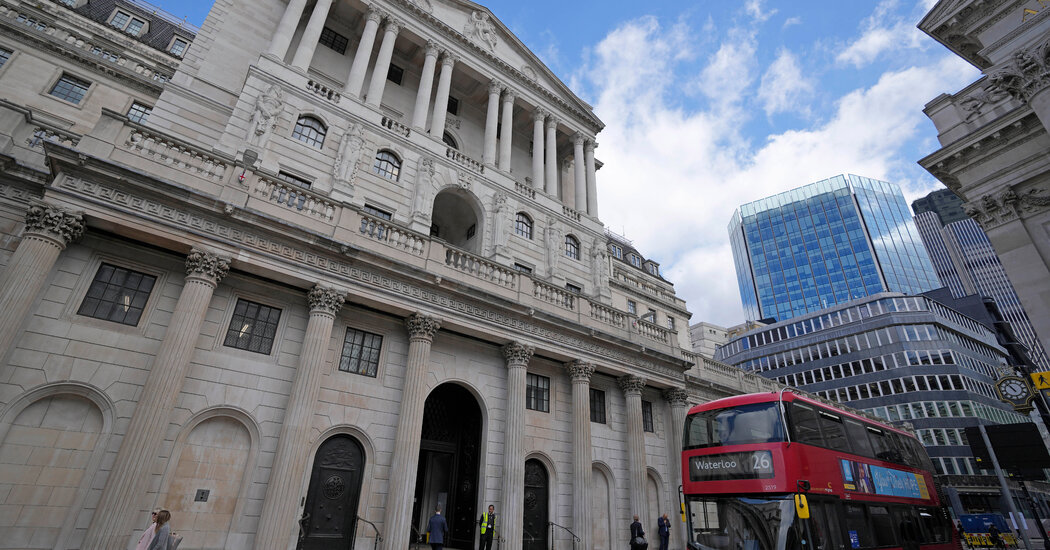 The Bank of England continued its efforts to tamp down inflation on Thursday, raising interest rates for the fifth consecutive policy meeting to 1.25 percent, the highest since 2009.

With the economic outlook in Britain weakening, policymakers raised rates by just a quarter of a percentage point even as other major central banks around the world have recently opted for larger increases. Earlier this week, data showed the economy contracted in April for a second month in a row. The bank now forecasts the economy to contract 0.3 percent in the second quarter, instead of growing slightly.

Andrew Bailey, the governor of the central bank, had previously described officials as being on a “narrow path” trying to tackle inflation without cooling the economy too much. But inflationary pressures have grown and the bank has expressed more concern about price increases extending deeper into the economy, as businesses react to higher costs by raising their own prices and workers demand higher wages.

The annual inflation rate is expected to climb above 11 percent in October, higher than previously forecast, when household electricity and gas bills are set to rise again. That would be the highest rate since the early 1980s and more than five times the bank’s 2 percent inflation target. Inflation in April was 9 percent.

Three members of the bank’s nine-person rate-setting committee wanted the bank to take more aggressive action, and voted for a half-point increase.

On Wednesday, the Federal Reserve raised interest rates by three-quarters of a point, the largest jump since 1994. Last week, the European Central Bank said it would raise rates in July for the first time in more than a decade by a quarter-point, but likely double the size of the rate increase at a meeting in September. Earlier on Thursday, the Swiss National Bank surprised markets by raising rates by a half a point.

In a shift in tone from the Bank of England’s previous meeting in May, policymakers didn’t rule out the possibility of a larger increase in interest rates in the future. The committee would be “particularly alert to indications of more persistent inflationary pressures, and will if necessary act forcefully in response,” according to minutes of the bank’s meeting.

Countries around the world are facing inflation rates unseen for decades as supply bottlenecks after pandemic lockdowns collide with trade disruptions from the war in Ukraine. Since Russia invaded Ukraine, oil and gas prices have risen and the price of essential commodities from fertilizer to wheat have pushed up global food prices.

But in Britain, not all of the inflation can be attributed to global events, the bank said on Thursday.

Inflationary pressures also stem from the country’s tight labor market. With a record number of job vacancies, companies competing for staff are increasing wages and bonuses. Meanwhile, companies are also raising prices as their own costs increase. Core inflation, which strips out volatile energy and food prices, is expected to climb to 7 percent in September.

Martin O’Sullivan: Why everyone should consider putting Enduring Power of Attorney in…

Valheim is Better with Friends – Time to Get Ready for…