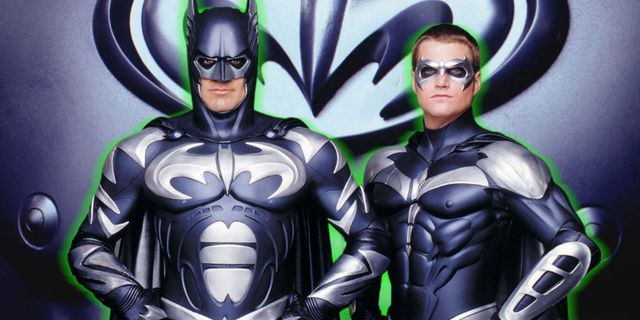 Jose Fernandez, the costume designer of 1997’s Batman and Robin, explains how he created the idea for the notorious nipples on the film’s Batsuit.

The costume designer of 1997’s Batman & Robin sheds some light on the creation of the notorious Batsuit nipples.

According to THR, Jose Fernandez, who worked on the costume for George Clooney’s Batman as well as for Val Kilmer’s in 1995’s Batman Forever, wanted to give the Batsuit a sense of anatomy. “It wasn’t fetish to me, it was more informed by Roman armor — like Centurions,” said Fernandez. “And, in the comic books, the characters always looked like they were naked with spray paint on them — it was all about anatomy, and I like to push anatomy.”

When Fernandez worked on Kilmer’s Batsuit in Forever, he made the nipples subtle, but director Joel Schumacher loved the feature so much that he wanted them to be more prominent in the follow-up. It was a decision that made Fernandez a little uncomfortable. “Schumacher wanted them sharpened, like, with points,” he said. “They were also circled, both outer and inner — it was all made into a feature of the Batsuit. I didn’t want to do it, but he’s the boss, so we sharpened them, circled them and it all became kind of ridiculous.”

Bat-nipples were only one of many key issues with the Batman movies under Schumacher’s direction. Batman Forever and Batman & Robin took on a lighter tone that broke away from the gothic direction of Tim Burton’s previous installments. Initially, the change in direction seemed advantageous, when Forever outgrossed Burton’s Batman Returns. However, the need to please corporate sponsors and increase the number of villains resulted in an audience backlash on Batman & Robin, which put the franchise on ice for eight years.

Burton was candid about the Bat-nipples as well as Schumacher’s kid-friendly direction. “[Back then] they went the other way. That’s the funny thing about it,” said Burton in an interview. “But then I was like, ‘Wait a minute. Okay. Hold on a second here. You complain about me, I’m too weird, I’m too dark, and then you put nipples on the costume? Go fuck yourself.’ Seriously. So yeah, I think that’s why I didn’t end up [doing a third film].”

Batman & Robin remains the worst-reviewed entry in the Batman film franchise. Even its star George Clooney continues to rail against the film and says he refuses to let his wife watch it. “There are certain films I just go, ‘I want my wife to have some respect for me,'” said Clooney.

Capitol police officer says “It was carnage, it was chaos” during Jan. 6 public hearing testimony

The Fastest-Growing Audiences On TV Are For Women’s Sports