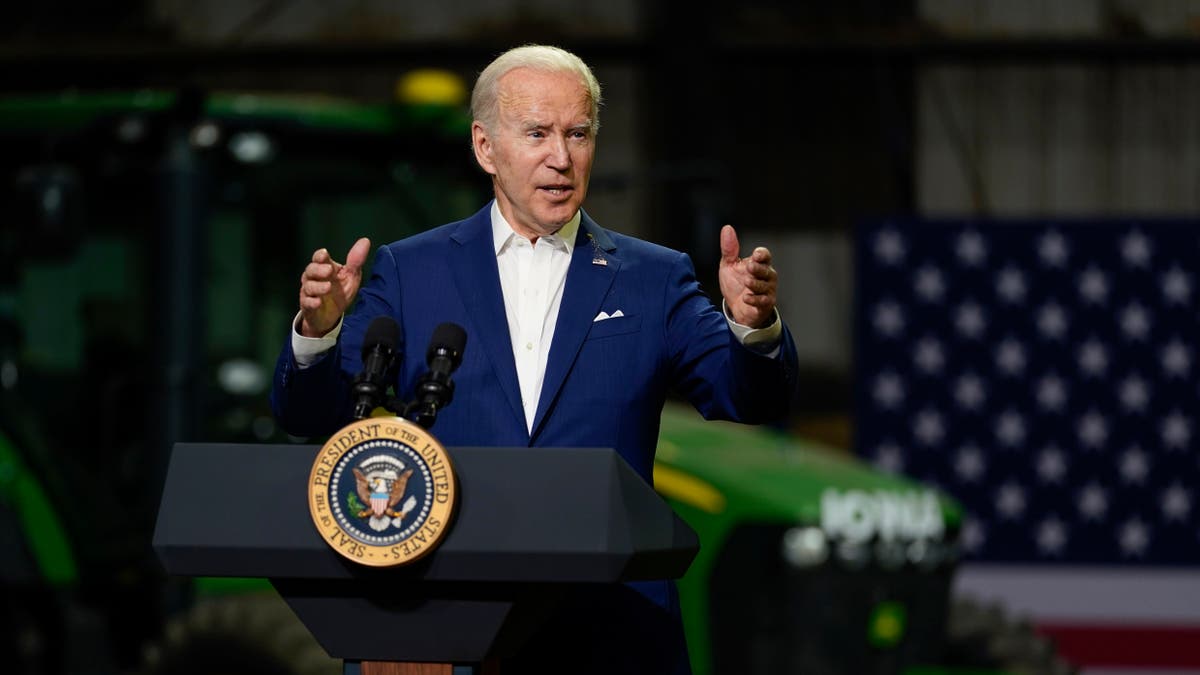 President Joe Biden has described the actions of Vladimir Putin’s army in Ukraine as “genocide” for the first time. In remarks in Iowa concerning gas prices, the president said: “Your family budget, your ability to fill up your tank — none of it should hinge on whether a dictator declares war and commits genocide a half a world away.”

Mr Biden has used the phrase “war crimes” before, but the administration has until now steered away from the term “genocide” when talking about the actions of Russian troops on the ground in Ukraine.

The White House is managing the fallout from new data showing that consumer prices last year rose at their fastest clip since 1981, wiping out many of the pay rises Americans had received during the post-Covid recovery. The numbers come just as a new poll shows Mr Biden’s already low approval rating sinking to new depths.

His overall rating now stands in the low 40s, having plunged below the 50-point mark around the time of the withdrawal from Afghanistan. The electorate apparently hold him in even lower esteem when it comes to his handling of specific issues like crime and immigration.

Why is US inflation is so high, and when might it ease?

Another month, another four-decade high for inflation.

For the 12 months that ended in March, consumer prices rocketed 8.5%. That was the fastest year-over-year jump since 1981, far surpassing February’s mark of 7.9%, itself a 40-year high.

Even if you toss out food and energy prices — which are notoriously volatile and have driven much of the price spike — so-called core inflation jumped 6.5% in the past 12 months. That was also the sharpest such jump in four decades.

EXPLAINER: Why Biden is allowing more ethanol in gasoline

The Biden administration says it will suspend a federal rule that bars higher levels of ethanol in gasoline during the summer. The move, which President Joe Biden announced during a Tuesday visit to Iowa, is intended to tamp down prices at the pump that have spiked during Russia’s war with Ukraine. Iowa is a key producer of the corn-based fuel additive.

Key members of the White House Environmental Justice Advisory Council say one year into the Biden Administration’s commitment that 40 per cent of all benefits from climate investment go to disenfranchised communities, not enough has been done.

Speaking on Tuesday at a press briefing ahead of the HBCU Climate Change Conference in New Orleans, they say they’ve secured $14 million from the Bezos Earth Fund for a program called Engage, Enlighten and Empower to hold the Biden administration accountable for carrying out its Justice40 initiative.

Key members of the White House Environmental Justice Advisory Council said they plan to use $14 million from the Bezos Earth Fund to make sure the Biden administration follows through on its Justice40 initiative, a commitment that 40% of benefits from all climate and environment investment go to disadvantaged communities

Wisconsin’s Supreme Court is scheduled to hear arguments on Wednesday in a case that will likely determine how extensively absentee ballot drop boxes can be used in the upcoming midterm election, where the battleground state’s Democratic governor and Republican senator are both on the ballot.

The fight is being closely watched as Republicans push to limit access to absentee ballots following president Joe Biden’s narrow win in Wisconsin over Donald Trump in 2020 by just under 21,000 votes.

Wisconsin’s Supreme Court is scheduled to hear arguments in a case that will likely determine how extensively absentee ballot drop boxes can be used in the upcoming midterm election where the battleground state’s Democratic governor and Republican U.S. senator are on the ballot

A state-owned TV channel in Saudi Arabia mocked Joe Biden and Kamala Harris with a Saturday Night Live style sketch, showing the president as a clueless old man falling asleep on the podium.

The video clip is from “Studio 22,” which was broadcast on the Saudi government-owned television conglomerate MBC and shows two actors playing President Biden and Kamala Harris.

While Mr Biden is shown struggling to give a statement on Russia as he fumbles and falls asleep, Ms Harris is seen often correcting the president, waking him up and bringing him back when he wanders off the stage.

Bird appears to poop on Joe Biden in Iowa

President Joe Biden’s day in Iowa took a colourful turn when he was pooped on by a bird while speaking to a crowd in a barn about his plan to help Americans struggling with soaring inflation.

Biden may meet families of North Korea abductees in Japan

The Japanese government will work toward realising a meeting between US president Joe Biden and families of those abducted by North Korea during his planned visit to Japan, chief cabinet secretary Hirokazu Matsuno said on Wednesday.

Mr Biden is set to visit Japan at some point this year for a planned meeting of the so-called Quad security group that includes Australia, India, Japan and the US but no specific date has been announced for the meeting.

He alluded to the potential timing of the visit when he told Indian prime minister Narendra Modi this week that he looked forward to seeing him in Japan “on about 24 May”.

Previously, family members of those abducted by North Korea decades ago met with former presidents Barack Obama and Donald Trump.

Mr Biden was speaking in Iowa about the continued effects of inflation, which the White House has pinned as an effect of Mr Putin’s invasion, and declared that American consumers should not pay the price for the actions of “a dictator” declaring war against a sovereign country and its people.

“Your family budget, your ability to fill up your tank, none of this should hinge on whether a dictator declares war and commits genocide a half a world away,” declared the president on Tuesday.

“Yes, I called it genocide,” he told reporters. “It’s become clearer and clearer that Putin is just trying to wipe out the idea of even being a Ukrainian.”

John Bowden has the latest:

In Iowa, President Joe Biden remarks on this morning’s shooting on the New York subway in Brooklyn.

Jill and I — my wife and I are praying for those that are injured in all of those touched by the trauma. We are grateful for all of the first responders who jumped into action, including the civilians. Civilians who did not hesitate to help their fellow passengers and tried to shield them. My team has been in touch with the New York police commissioner and the Department of Justice is working with the NYPD on the ground. They’re going to continue to stay in close contact with New York authorities as we learn more about the situation over the coming hours and days.

The perpetrator of the attack remains at large.

Here’s our latest coverage of the incident:

Sarina Wiegman cautions against England over-confidence ahead of Euros

Ubank apologises for app issues blocking people from their…