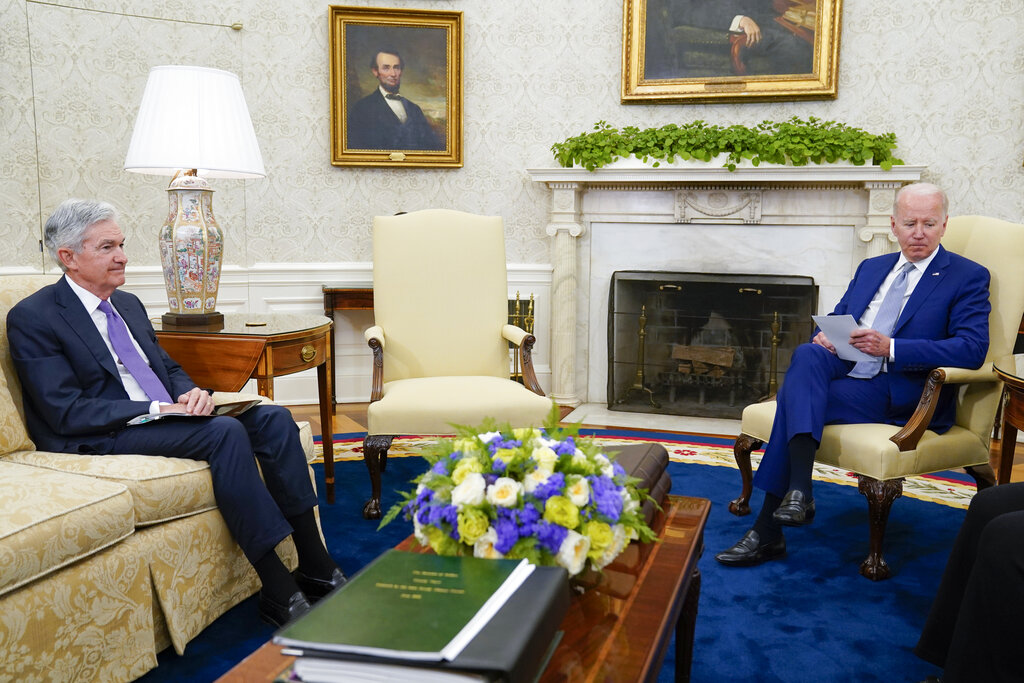 WASHINGTON — Focused on relentlessly rising prices, President Joe Biden plotted inflation-fighting strategy Tuesday with the chairman of the Federal Reserve, with the fate of the economy  increasingly dependent on the actions of the government’s central bank.

Biden hoped to demonstrate to voters that he was attuned to their worries about higher gasoline, grocery and other prices while still insisting an independent Fed will act free from political pressure.

Like Biden, the Fed wants to slow inflation without knocking the U.S. economy into recession, a highly sensitive mission that is to include increasing benchmark interest rates this summer. The president said he would not attempt to direct that course as some previous presidents have tried.

The sit-down on a heat-drenched late-spring day was Biden’s latest effort to show his dedication to containing the 8.3% leap in consumer prices over the past year.

Rising gas and food costs have angered many Americans heading into the midterm elections, putting Democrats’ control of the House and Senate at risk.

But Biden is running out of options on his own. His past attempts — releasing oil from the strategic reserve, improving port operations and calls to investigate price gouging — have fallen short. High prices have undermined his efforts to highlight the low 3.6% unemployment rate, leaving a growing sense of pessimism among Americans.

Tuesday’s meeting was the first since Powell was renominated in November by Biden to lead the central bank and came two weeks after his confirmation for a second term by the Senate.

It also represented something of a reversal by Biden as inflation weighs heavily on voters’ minds. The president asserted in April 2021 that he was “very fastidious about not talking” with the independent Fed and wanted to avoid being seen as “telling them what they should and shouldn’t do.”

Inflation has shown signs of moderating but is likely to remain far above the Fed’s 2% target through the end of the year. Gas prices are expected to keep rising, particularly now that the European Union has agreed to cut off 90% of its oil purchases from Russia. That will force the EU to buy more oil elsewhere.

Biden faces an increasingly global challenge as energy and food costs have jumped after Russian President Vladimir Putin invaded Ukraine in February. Simultaneously, China imposed lockdowns tied to coronavirus that strained supply chains. This has left the EU nursing record inflation and the risks of a recession, while U.S. consumers, facing the same risks, are increasingly disgruntled by gas prices averaging a record $4.62 a gallon.

The best call and text blocker apps for Android and iOS

‘Time to take another step’: Commanders’…