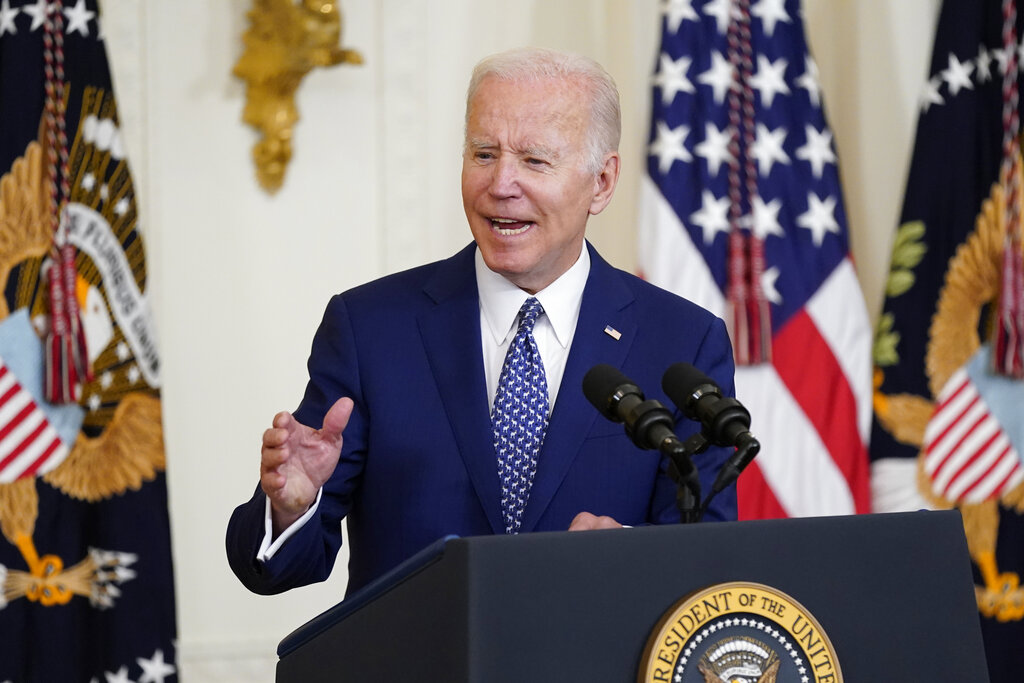 WASHINGTON (AP) — President Joe Biden confirmed on Tuesday that he will visit Saudi Arabia next month for talks with leaders of the kingdom, a dramatic reordering of his stance on the kingdom that he pledged to make a “pariah” as a Democratic candidate for the White House.

With the visit at the tail end of a July 13-16 Middle East trip that includes stops in Israel and the West Bank, Biden is edging off his adversarial stance against on the Saudis’ human rights record.

He’s looking to reset the relationship at a time when the U.S. could use help from the oil-rich kingdom to alleviate soaring prices at the pump for motorists at home and around the globe.

The stop in Saudi Arabia will include talks with Crown Prince Mohammed bin Salman, the defacto leader of the kingdom. U.S. intelligence officials have determined Prince Mohammed likely ordered the 2018 killing of U.S.-based journalist Jamal Khashoggi.

In a brief exchange with reporters ahead of departing to Philadelphia on Tuesday for a labor convention, Biden bristled when asked about his upcoming visit to Jeddah and noted that his team had laid out in a statement “everything I’m doing in the Middle East.”

Human rights advocates and some Democratic allies cautioned Biden about visiting the kingdom, saying such a visit without first getting human rights commitments would send a message to Saudi leaders that there are no consequences for egregious rights violations. The Saudis have been accused of using mass arrests, executions and violence to squelch dissent.

But at a time of skyrocketing prices at the gas pump, growing worries about Iran’s nuclear program and perpetual concern that China is expanding its global footprint, Biden and his national security team have determined that freezing out the Saudis, particularly the crown prince, is simply not in the U.S. interest.

Sen. Dick Durbin, D-Ill, chairman of the Senate Judiciary Committee, and the No. 2 Senate Democrat, told CNN that Biden “has a tough job dealing with gasoline prices and trying to find ways to find new sources and supplies to bring down inflation in the energy sector.”

But Durbin said he had “mixed feelings” about the visit, calling the Saudi’s human rights record “an outrage.”

John Kirby, the National Security Council coordinator for strategic communications, said on CNN that the administration respects the differences of opinion about the president’s decision. He stressed “that Saudi Arabia is a key partner in the region on things like counterterrorism, on the war in Yemen, on energy production.”

The Saudi Embassy in Washington said Biden would meet with both King Salman and Prince Mohammed and described the visit as coming at the king’s invitation “to strengthen the historical bilateral relations and the distinguished strategic partnership between” the two countries.

“The kingdom of Saudi Arabia looks forward to welcoming President Biden and defining the next chapters of our partnership,” the Saudi Embassy said in a statement. “At a time of global challenges related to the global economy, health, climate and international conflict, the partnership between our two countries is as critical as ever to the promotion of peace, prosperity and stability around the world.”

The White House announced the trip after Saudi Arabia this month helped nudge OPEC+ to ramp up oil production by 648,000 barrels per day in July and August, and the kingdom agreed to extend a United Nations-mediated cease-fire in its seven-year war with Yemen. Biden called the Saudi cease-fire decision “courageous.” Prince Mohammed, who is commonly referred to by his initials, MBS, played a “critical role” in brokering an extension of the cease-fire, according to a senior administration official who briefed reporters on the condition of anonymity.

White House press secretary Karine Jean-Pierre in a statement said King Salman invited Biden to visit the kingdom during a gathering in the port city of Jeddah of the six Gulf Cooperation Council nations — Bahrain, Kuwait, Oman, Qatar, Saudi Arabia and the United Arab Emirates — as well as Egypt, Iraq and Jordan.

She suggested that Biden will raise human right concerns with Saudi officials bud did not directly answer whether the president would speak to Prince Mohammed about the Khashoggi killing.

“It’s important to also emphasize that while we recalibrate relationships, we are not looking to rupture relationships,” Jean-Pierre said. “But human human rights issues, human rights conversations (are) something that the president brings up with many leaders and plans to do so.”

Biden’s first stop during the Middle East swing will be in Israel for a long-planned visit with Israeli Prime Minister Naftali Bennett in Jerusalem. He will then meet with Palestinian Authority leaders, including Mahmoud Abbas, in the West Bank. Biden will cap the whirlwind trip with the visit to Jeddah.

The trip to Israel comes at a fraught time for Bennett’s fragile coalition, as he tries to avert another election and the potential return to power of former Prime Minister Benjamin Netanyahu and as Iran’s nuclear program continues advancing.

Biden while in Israel will take part in a virtual meeting of “I2-U2” leaders, an economic forum established late last year that includes Israel, India, the United Arab Emirates and the U.S.

The president’s time in Israel also coincides with the Maccabiah Games, a sporting competition that brings together thousands of Jewish and Israeli athletes from around the globe. Biden, who visited Israel for the first time as a young senator nearly 50 years ago, is also expected to meet with athletes taking part in the games.

Israeli officials in their engagement with the Biden administration have pressed their point of view that U.S. relations with Arab capitals, including Riyadh, are critical to Israel’s security and overall stability in the region. The visit could also provide an opportunity to kick off talks for what the administration sees as a longer-term project of normalizing Israeli-Saudi relations.

Facing questions earlier this month about a potential visit to Saudi Arabia, Biden stressed that the relationship had multiple facets that impact U.S. and Middle East security.

“Look, I’m not going to change my view on human rights,” Biden said. “But as president of the United States, my job is to bring peace if I can, peace if I can. And that’s what I’m going to try to do.”
—
Associated Press writer Darlene Superville in Philadelphia contributed reporting.