Biker shares sexism she faces: ‘You don’t need a penis to ride a bike’ 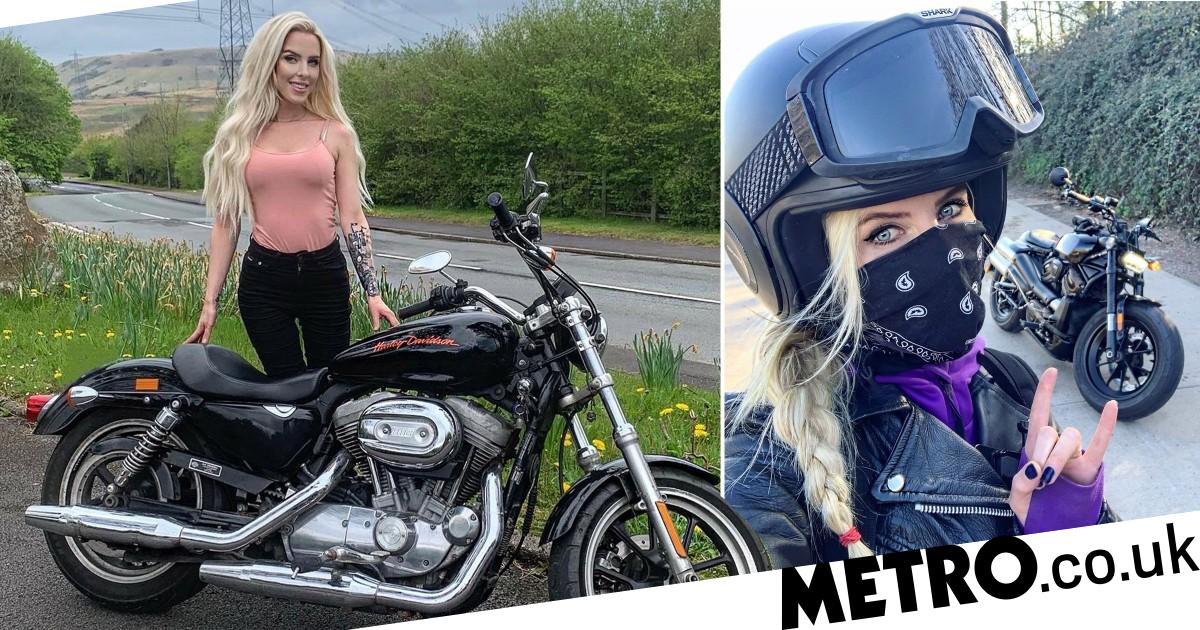 Michelle Chamberlain has been riding motorbikes for almost 10 years, but she still gets people asking if her vehicle is her boyfriend’s.

But it was she who got him into biking – not the other way around.

Michelle, 31, said: ‘I know I am a bit of a unicorn in the biking community and yes it is rare to see a tiny lady on a Harley Davidson.

‘I get a lot of comments such as “is that your boyfriend’s bike?”

‘But guess what, you don’t need a penis to ride a bike.

‘It is insulting when people assume you can’t ride because you’re a woman.

‘My partner has a bike too, I got him involved, which is why it’s annoying when men assume I ride on the back of his bike – he passed his test six years after me.’

Petite Michelle is 5ft 4 inches tall, and leaves men shocked when she reveals the bike is hers.

The insurance worker passed her test nearly a decade ago in tribute to her late stepfather and points out that, yes, even ‘pretty girls’ who get their hair and nails done can ride motorbikes.

She said: ‘If you want to wear all black and blend in with the men, that’s fine, but the more women that stand out and “look” like women, the more likely people will notice that and think “Yes! That is a woman riding her own motorcycle.”‘

Michelle’s passion for motorbikes started when she was 15.

Her stepdad was a passionate biker, and he promised to one day buy her her very own Harley.

After he died of cancer in 2012, Michelle vowed to one day pass her test, buy her own Harley and ride Rout 66 in tribute to him.

She said: ‘Passing my test was the best thing I have ever done, and it was a silver lining in an awful situation.

‘It’s a lasting legacy, and he rides alongside me in spirit, he keeps me safe.

‘I hope to ride Route 66 in his memory in the next year or two.’

Michelle is a former pageant winner and refuses to let her love of fashion, modelling and photography be mutually exclusive from her biking hobby.

She said: ‘I’ve participated in lots of charity events, fashion shows, been involved in pageants, winning awards in Miss Wales and regional events.

‘But I’ve also studied law, and during my education, I debated in the House of Commons and The National Assembly for Wales – I’ve got a brain.

While older men often don’t believe she can handle a Harley, Michelle said some negativity sadly comes from other women too.

She said: ‘A few women, bikers and non-bikers have been offended by my photos, but the bike is a huge part of my identity, and I’m not going to tone down my personality or appearance.

‘I am unapologetically true to myself and there is no written law that states if you ride a bike you must look like a foot.’

She said: ‘Yes, I post posed pictures during my ride because that’s my personality and who I have always been.

‘My page is my blog and all I’m doing is sharing my personality as well as my bike.

‘I like banter and sarcasm and a lot of things don’t offend me, but there is a line and some people do cross it.’

Now, she spends many hours every week riding her Harley around the Welsh countryside.

She said: ‘Wales is the gift that keeps on giving. If you’re a fan of winding mountain roads and incredible views, it’s the place to be.

‘After a long week at work, a sunset ride through the mountains is priceless.’

And even though she likes to keep herself put together, she’s not afraid to get her nails dirty.

Nasty comments and sexual harassment aside, Michelle is very grateful to the majority of the biking community for their support.

She said: ‘When I started riding, after my stepdad passed away, I didn’t have anyone to turn to when I had questions.

‘The biking community have been invaluable and after passing my test I joined a Harley Owners Group went on group rides and got to know other bikers.

‘And I’m not ashamed to ask for help.’


MORE : University Challenge captain accused of sexism after ‘blanking only woman on the team’


MORE : ‘Turns out you can’t get away from it anywhere’: Inside the sexism that runs rife in the drinks industry

What is Marvel Snap?