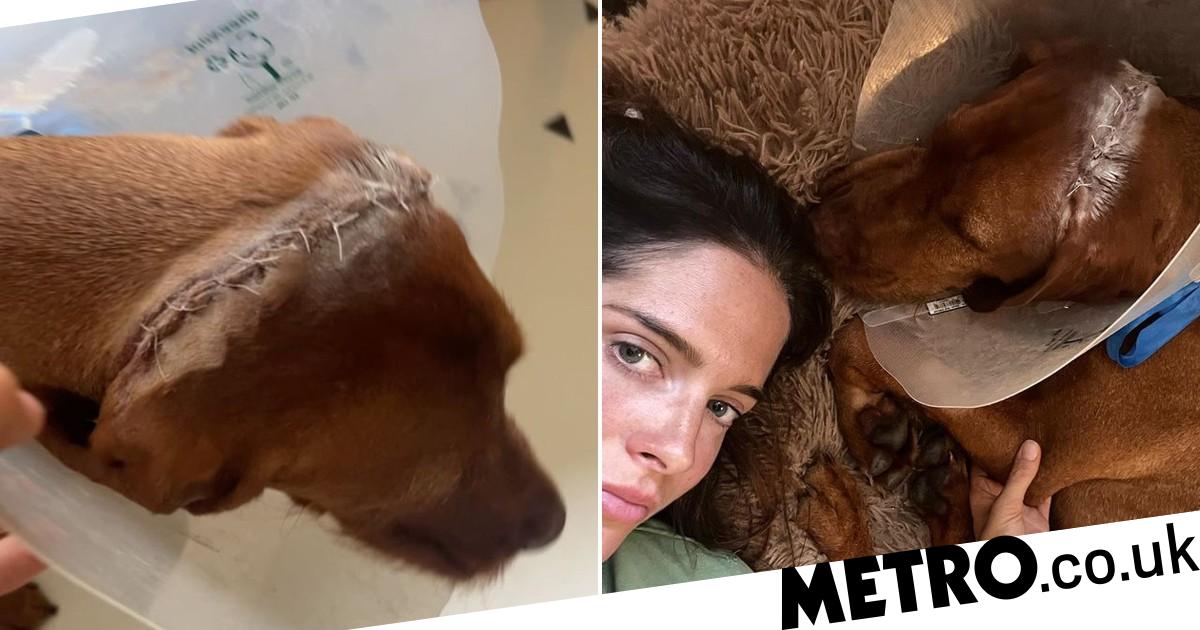 Made in Chelsea star Binky Felstead has had a ‘pretty terrifying few hours’ after her beloved dog was almost killed by a van.

The former TV star, 32, is best known for her stint on the reality show, which she left in 2017 to focus on India, her daughter, whom she shares with ex Josh Patterson.

Binky – real name Alexandra – is now married to businessman Max Fredrik Darnton – whom she met while they attended separate parties at Oxford’s Soho Farmhouse – and they have a vizsla called Pedro.

However, tragedy struck this week when their four-legged friend was involved in an accident.

Taking to Instagram to give her 1.4million followers the low down on what happened, Binky began: ‘A pretty terrifying few hours as our Pedro was hit by a van …( who drove off and left him for dead yesterday without stopping to see if he was okay.. )’.

She said that she thought she had ‘lost’ Pedro yesterday, who got hit by a speeding van after chasing another dog across the road.

‘I got a call from Max saying he probably wouldn’t make it and I had to urgently come to the vets and say goodbye. I don’t think I’ve seen anything like what I saw & of course we were in pieces,’ Binky wrote.

She went on to show her appreciation for the ‘incredible teams’ at Medivet Barnes White Hart Lane and Goddard Veterinary Group who ‘saved his life.’

Binky did not mince her words while addressing the van driver who she says hit her dog, calling them ‘vile’ and ‘immoral’.

‘I feel sick to my stomach you’ve got away with this. Well, that’s of course until karma gets you …. Maybe you drove off and left an animal for dead because you were speeding? You should feel ashamed!’, she raged.

‘Regardless, I can now say thank god he’s alive (amazingly) & we are so happy he’s now back home and getting lots of cuddles. India hasn’t quite got used to how he now looks & is a little scared to go too close to him but of course this will pass.’

Signing off her emotional post, she concluded: ‘He definitely heard us when we were saying our goodbyes over his lifeless body & I truly believe that helped bring him around. 🙏🏼 SO HAPPY YOU’RE HOME MY BOY – you can sleep in our bed WHENEVER you like !!!!’.

The series of photos showed Pedro wearing a cone after he required stitches around his neck area.

Taking to her comments section to send well wishes, former Geordie Shore favourite Vicky Pattison wrote: ‘I’m sending you all so much love Binky… I can’t imagine what you all must have went through 🥺🥺🥺 Get well soon Pedro x’.

Binky’s mum, Jane, also left a comment, sweetly writing: ‘Wonderful boy. So happy – you’ve got many more years of fun and kisses, sleeping in their bed to come! 😂😂❤️’.

The couple welcomed Pedro into their family in August 2020 – and he has grown considerably since then!

Taking to social media to introduce him to the world almost two years ago, the mum-of-one (human) wrote: ‘Welcome to our little family Pedro Felstead – Darnton … ( although I think you’re going to make it a lot bigger judging by the size of those paws! 🐾) 😂💙’.

Binky now works as an influencer and is the co-founder of Bloss, a pregnancy and parenting site that offers support and advice.


MORE : Matt Willis reveals he didn’t cry until he was 29 as he opens up on being a man in today’s world: ‘I was told boys don’t do that’