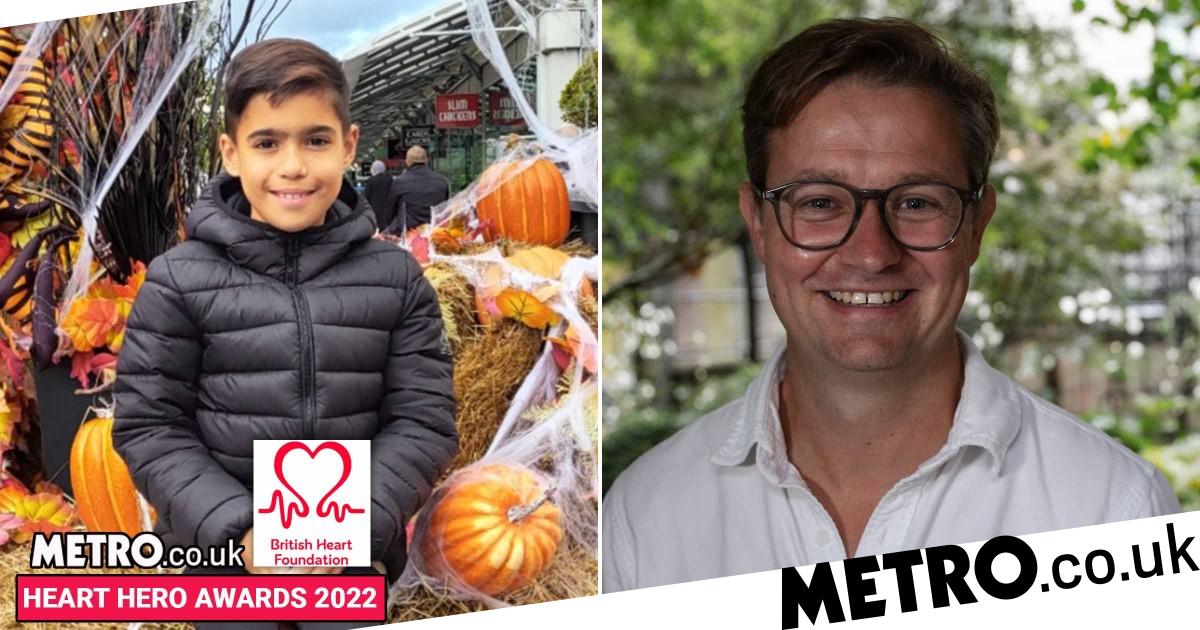 ‘Part of the reason we do our job is to give the gift of a future,’ explains Dr Richard Issitt, whose pioneering research into children’s heart transplants has helped save dozens of lives already.

Dr Richard, a senior paediatric perfusionist at Great Ormond Street Hospital for Children, knew that there were many obstacles faced by young children waiting to receive a heart transplant.

In particular, if a child received a heart from a donor that did not match their blood group, litres and litres of donor blood products would be needed to flush out their own. If not, the child’s blood would attack the new mismatched organ.

This meant that sadly, only very young children were able to receive mismatched hearts – to reduce the amount of blood lost and thrown away – leaving older children waiting for life-saving transplants.

And so, one night at the pub in 2014, with his colleagues Alex Robertson and Richard Crook, he brainstormed a revolutionary idea that would change the future of paediatric heart transplants – with an original sketch drawn on the back of a beer mat.

Richard explains his work in more detail: ‘We don’t have that many hearts to go around, especially for children, which obviously is a good thing (because that means children aren’t dying). But unfortunately, for people who are waiting for a heart, it’s bittersweet. So we need to maximise the usage of the donors that we do have.’

Richard stresses that in adult heart transplants it’s crucial to match a patient with a donor from the right blood group. But, this isn’t actually the case for children – as they can be given a heart from a different blood group.

He says: ‘As we get older, our immune systems build up the ability to differentiate between blood groups.

‘For example, if you’re a type A and I’m a type B and, if your heart was coming to me, my body would recognise that it’s the wrong blood group and start attacking it; it acts as it would if it was encountering a virus and can’t really tell the difference. Obviously, that can lead to rejection.’

This previously meant mismatched heart transplants were restricted to smaller children up to four years old – to reduce the amount of blood lost and thrown away.

For decades, this was a major stumbling block that the medical world faced.

But that night in the pub, Richard and his colleagues came up with a solution. It involves using a special blood filtering device to remove the rejection-causing antibodies during the transplant operation – which drastically reduces the amount of donated blood needed as a result.

He explains: ‘We thought well actually, rather than just throw everything out in terms of the blood that’s going around the patient, why don’t we see if we can start targeting the actual antibodies that cause the problem of rejection.’

Richard and his team experimented with specific antibody targets, so that antibodies would stick to them – rather than the donated heart. After trialling in a laboratory with success, it was adopted in a clinical setting.

Now, seven years on, the practice is being used by more and more hospitals around the world and it also means transplants can happen in older children, too.

One such child to receive a transplant thanks to Richard’s research – which was funded by the British Heart Foundation – is nine-year-old Rafi, who was diagnosed with a heart murmur at just six weeks old.

After having open heart surgery at the age of one, as well as receiving a HeartWare – a mechanical pump – when he was five, Rafi still needed a heart transplant by the age of six.

Various complications meant Rafi’s health was declining rapidly and his mum Katy Levett was told in 2019 that her son could receive a mismatched transplant from another blood group (thanks to the team’s new technique) as his only real option for survival.

By this point Rafi had spent so much of his childhood in hospital that Katy was willing to try anything to improve his deteriorating condition.

Katy says: ‘Before his transplant he didn’t have any hope. If that heart hadn’t have come along, he wouldn’t have made it.

‘Rafi was in hospital so much he couldn’t live his life and, if he didn’t get the heart, his life would never have begun.’

In a strange twist of fate, Richard was also involved with Rafi’s transplant himself at Great Ormond Street on December 29, 2019 – with Katy describing it as ‘the best Christmas present ever.’

Thankfully, the transplant was a success and now Rafi is a thriving young boy who has his life back.

Katy adds: ‘He can do all these normal things now: he can go to school, he can play football and he’s learning to swim – which he couldn’t do before.

‘He’s being a child now and that’s all I ever wanted.’

When we see a child running around, causing absolute chaos for parents after a transplant, that’s my goal.

Richard and his colleague’s work means they’ve doubled the age range of children eligible for a mismatched heart transplant patients – and have considerably reduced the amount of blood used during these operations.

‘Rafi was sort of a trailblazer, in many ways, actually due to the fact that Katy was willing to help us push the boundaries of what’s possible,’ explains Richard.

‘It’s nice to know that we’re making a difference – so when we see a child running around, causing absolute chaos for parents after a transplant, that’s my goal.

‘To see somebody come out the other side and to be full of life, there’s no greater reward.’

Without Richard and the team’s novel idea back in 2014, it’s likely that Rafi would have still been waiting for a blood group compatible donor heart – more than a year after his mismatched transplant took place.

Both Katy and Richard also hope their story shines a light on the importance of organ donation and giving blood – and encourage parents to have more open discussions about donating their child’s organs.

Katy adds: ‘None of this would have been possible if a heart hadn’t been donated and – especially in children – it’s such a taboo subject. It’s important to highlight that without donated organs, none of this can happen.

‘Rafi probably had 10 blood transfusions in total including the blood he needed for his transplant.

‘We tend to think of organ donation as being for old people, but what we don’t think of is a one-year-old who hasn’t lived a life.

‘You never think you’re going to be in a position to need an organ, let alone your child needing a heart.’

While Richard adds: ‘The parents who, at such a devasting point in their lives, can put other children first are undoubtedly the unsung heroes in this. Their selflessness and generosity means that somewhere, an extremely sick child has the chance at life thanks to them.’


MORE : Granddad joked ‘better get the defib ready’ minutes before having heart attack


MORE : The ‘medical feminist’ nurse going above and beyond for women’s heart health

A BHF Heart Hero, with Metro.co.uk as its media partner this year, can be anyone from a healthcare professional doing exceptional work, to a young person living with heart disease that has shown incredible courage and determination, to an inspiring fundraiser who has found creative ways to help fund research.

Those shortlisted will be invited to an awards ceremony hosted by Vernon Kay at Glaziers Hall in London on December 1, when the winners will be announced.

You can register to watch the celebration online through a live stream on the evening from 8pm. Guest celebrities will be announcing some of the winners.

Judging of the categories is now complete with Scottish footballer Scott Allan and TV and radio presenter Will Njobvu among this year’s celebrity judges.

But the Young Heart Hero and CPR Hero categories remain open to nominations throughout the year.

The awards ceremony raises awareness of the continued need for funding for the pioneering research that is turning science fiction into reality, and providing hope for more than seven million people in the UK living with heart and circulatory conditions.

To find out more about the categories or to make a nomination, visit the British Heart Foundation website.

Cummins’ Australians take their eyes off the ball against…

No 10 admits ‘escalatory’ risk in sending fighter jets to…