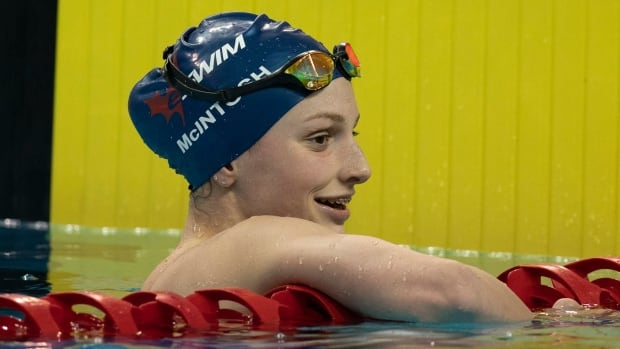 Exactly one year ago, Canadian swimmers were preparing for the Olympic trials in Toronto, hoping to punch their ticket to Tokyo after a year delay. While many of the faces competing at those trials were familiar, the emergence of some up-and-coming swimmers started to take shape.

At the Games, Canadian women excelled, winning six medals inside the Tokyo Aquatics Centre, matching their performance in Rio. While Maggie Mac Neil, Penny Oleksiak, and Kylie Masse garnered much of the attention for the efforts, Summer McIntosh – who was only 14 years old at the time – made a splash. So, too, did 18-year-old Josh Liendo.

Fast-forward to this month and there’s a noticeable excitement around Swimming Canada as 32 athletes prepare for eight days of competition at the world championships in Budapest, Hungary, beginning Saturday (full coverage on CBC and CBC Sports.ca).

Swimmer Maggie MacNeil stepped into the spotlight in a big way last summer. Now, she’s dealing with all the pressure by focusing more on her long-term goals, and gearing down ahead of the aquatics worlds.

But within the veteran squad is a mix of new talent, ready to make their debut on the world stage. Fourteen athletes will compete in their first world championships, including Olympians Katrina Bellio, Tessa Cieplucha, Ruslan Gaziev, Finlay Knox, and McIntosh.

This begins a very busy summer for the Canadian swimmers, 22 of whom will also compete in the Commonwealth Games July 28-Aug. 8 in Birmingham, England.

Here are some of the key Canadian storylines to watch going into the world championships.

Budapest marks the first international event without longtime head coach Ben Titley, who was let go at the beginning of March. Titley had led Swimming Canada for the past decade, restoring the program into medal contenders.

Now it’s up to interim head coach Ryan Mallette to keep the momentum going, a task he feels he can accomplish.

“I feel like nothing is beyond my experience level. I’ve had athletes medal at world championships and the Olympics. There’s nothing we’re trying to do that we haven’t done,” Mallette told CBC Sports earlier this year. “I’m comfortable with what I need to do to get to the highest level again.”

WATCH | What makes Oleksiak so fast:

How does Penny Oleksiak swim so fast?

Olympic swimmer turned CBC Sports analyst Brittany MacLean breaks down what makes Penny Oleksiak one of the fastest and most successful swimmers Canada’s ever seen.

Summer McIntosh has become a must-see every time she gets into the pool. During national trials two months ago in Victoria, the Toronto teenager turned heads by winning four events and swimming the 400m freestyle in the third-fastest time this year.

In March, the 15-year-old swam the third-fastest time ever in the 400m individual medley (IM) during an invitational trials prep event.

Longtime CBC Sports swimming analyst Byron MacDonald says McIntosh has the potential to be a superstar in the sport.

McIntosh will compete in three individual events in her world championship debut in Budapest: the 400m free, 200m butterfly and the 400 IM.

Josh Liendo is on a mission

Josh Liendo is on the verge of breaking through on the international scene. Since competing in Tokyo, he’s been doing everything he can to take his swimming to a different level.

This past December at the short course world championships in Abu Dhabi, Liendo earned his first medals at a senior international event. He won individual bronze in the 50m and 100m freestyle events and was also part of the 4x50m mixed relay that won gold.

With those medals, Liendo, 19, from Markham, Ont., became the first Black Canadian swimmer to win a gold medal, and the first to win an individual medal at a major international championships or Games.

Now he wants to make more history by winning a medal at these world championships.

“I like to have a little swag. I like to do things my way,” he told CBC Sports recently. “And I like to have fun at the end of the day. Some of that swagger and that confidence comes from international experience now and me knowing I have the ability to be great.”

Masse a model of consistency

Masse is a model of consistency, and her 11 medals make her Canada’s most decorated FINA swimmer of all time. The backstroke specialist also has four Olympic medals, including silver and bronze in the 100m and 200m events during the Tokyo Games, respectively.

At the last world championships in 2019, the 26-year-old from LaSalle, Ont., became the first Canadian swimmer to defend a world title as she won the women’s 100m backstroke in Gwangju, South Korea.

What will Oleksiak do at worlds?

That’s the big question surrounding Penny Oleksiak going into worlds — what Penny will show up?

The 22-year-old old, despite all of her Olympic success, has never won an individual world championship medal.

There’s no question Canada’s most decorated Olympian, with seven medals, loves the big stage of the Olympic Games. But she’s not shy about downplaying other important meets.

“For me, I like to call myself an Olympic swimmer. That for me is something so meaningful and special and I like to step up and get ready for that,” she told CBC Sports. “Any other year I use those big meets as a placement point to see where I’m at in the world at that time and make mistakes.”

In the wake of Rio after her resounding success, Oleksiak struggled with her mental health and all of the expectations that came with being an Olympic champion now in the spotlight. She’s talked openly about the darkness that followed, including questioning whether or not she wanted to even swim anymore.

Oleksiak says she’s now in a very healthy place – both mentally and physically – better understanding what she needs to stay successful in and out of the pool.

Olympic champion Maggie Mac Neil is taking some time away from individual events. In an exclusive interview with CBC Sports in April, Mac Neil revealed her mental health was struggling, feeling the expectation of being Olympic champion. She said she would not be competing in any individual events at the world championship, including the 100m fly event she won gold in at the Olympics.

“I always thought I was invincible. I was completely normal and fine in high school and most of college. But I think this year was a little more difficult for me,” Mac Neil said.

The 22-year-old from London, Ont., has been remarkable over the past few years.

In Tokyo, she won a medal of every colour, including Olympic gold in the 100-metre butterfly – her specialty event. She followed that up with four gold and a silver at the 2021 short-course world swimming championships in Abu Dhabi.

While she won’t be competing in individual events, Mac Neil will play a crucial role in Canada’s relay medal chances.