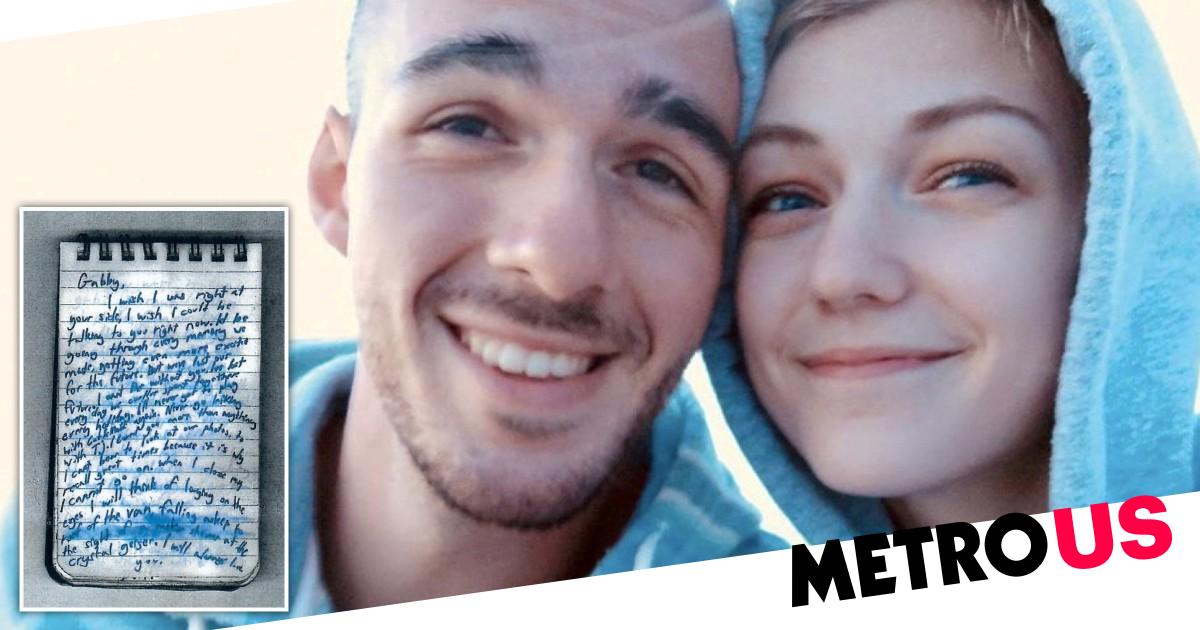 Brian Laundrie claimed he killed girlfriend Gabby Petito to ‘take away’ her pain after she fell into a creek, in a confession note found by his body.

Throughout eight water-logged pages recovered from a journal, he detailed the events leading up to her murder which he described as ‘merciful’.

The couple had been travelling across the US in a campervan when Ms Petito, 22, disappeared from Grand National Teton Park in late August 2021, only a month into the trip.

Her remains were found weeks later with an autopsy ruling she was killed by manual strangulation.

Laundrie, 23, claimed that Ms Petito sustained injuries after falling into a creek in an ‘unexpected tragedy’, and had begged for pain to stop.

‘I found her breathing heavily gasping my name, she was freezing cold,’ he wrote in his note.

‘I carried her as far as I could down the stream towards the car, stumbling exhausted in shock, when my knees buckled and knew I couldn’t safely carry her.

‘I started a fire and spooned her as close to the heat, she was so thin, had already been freezing too long.’

Laundrie said his partner could not identify what hurt, but she had a ‘small bump on her forehead that eventually got larger’.

Her feet and wrists also hurt, he wrote, and she continued to shake ‘violently’ while ‘begging for an end to her pain’.

In the letter, he admitted he didn’t know the extent of Ms Petito’s injuries but only knew she was in ‘extreme pain’.

‘I ended her life, I thought it was merciful, that it is what she wanted, but I see now all the mistakes I made. I panicked, I was in shock,’ he wrote.

Laundrie aroused suspicion when he drove her van from Wyoming to his parents’ home in Florida on September 1, and refused to talk about her whereabouts.

Her parents reported her missing on September 11 and soon after he became a person of interest, with his parents acquiring him a lawyer.

But on September 17, they too reported Laundrie missing and claimed to have not seen him in four days.

He took his own life by shooting himself in the head.

A journal containing the confession letter was found in a waterproof bag, and has been shared by his family’s attorney with Fox News ‘as a matter of transparency’.

In his letter, Mr Laundrie said he took his life not out of guilt for the murder, but as he ‘could not stand to live without her’.

It read: ‘From the moment I decided, took away her pain, I knew I couldn’t go on without her.

‘I rushed home to spend any time I had left with my family. I am ending my life not because of a fear of punishment but rather because I cant stand to live another day without her. I’ve lost out whole future together, every moment we could have cherished.

‘I have killed myself by this creek in the hopes that animals may tear me apart. That it may make some of her family happy.’