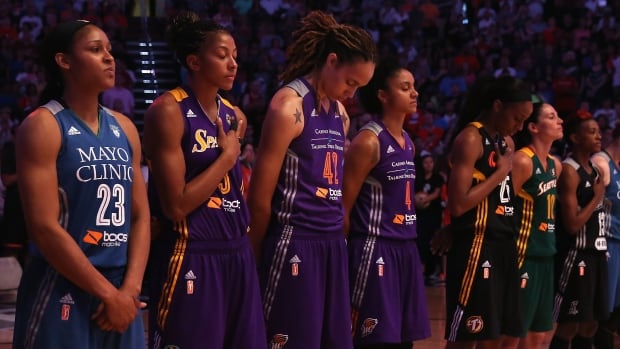 Brittney Griner will have a place at the WNBA All-Star Game, being named an honorary starter Wednesday by commissioner Cathy Engelbert.

Griner has been detained in Russia since Feb. 17 after authorities at an airport outside of Moscow said she had vape cartridges containing cannabis oil in her bag.

“During each season of Brittney’s career in which there has been an all-star game, she has been selected as an all-star,” Engelbert said. “It is not difficult to imagine that if BG were here with us this season, she would once again be selected and would, no doubt, show off her incredible talents. So, it is only fitting that she be named as an honorary starter today and we continue to work on her safe return to the U.S.”

The State Department in May designated Griner as wrongfully detained, moving her case under the supervision of its special presidential envoy for hostage affairs, who is effectively the government’s chief hostage negotiator.

Russian state-run news agency Tass reported last week that Griner’s detention was extended until at least July 2. Another American, Paul Whelan, has been held in Russia since December 2018 on espionage charges he and the U.S. government say are false.

Breanna Stewart and A’ja Wilson received the most votes from fans and were selected as co-captains for the event. They will be joined by Sue Bird and Sylvia Fowles, who both have announced they will retire at the end of the season. Bird will set a record with her 13th All-Star appearance. Fowles, who is injured right now, was selected for her eighth game.

Stewart and Fowles will be paired up as co-captains, as will Wilson and Bird, and will choose their teams.

“For icons like Sylvia and Sue to be voted into the AT&T WNBA All-Star Game as starters in their 15th and 19th seasons, respectively, is extraordinary,” Engelbert said. “And when you see the starting lineups dotted with first-time all-stars like Sabrina Ionescu, Kelsey Plum, and Jackie Young, it just seems right that Sylvia and Sue — who have said this will be their final season — join A’ja and Breanna as co-captains for an all-star event that will in some ways symbolize the passing of the torch to a new generation of WNBA stars.”

Starters were chosen by a combination of fan, media and player voting.

The league’s coaches will vote for the 12 reserves and the co-captains will draft their rosters on July 2. The game will take place on July 10 in Chicago with a three-point competition and skills challenge the day before.

A coalition of human rights groups on Wednesday called on U.S. President Joe Biden to “make a deal” to secure the release of the WNBA star.

U.S. Secretary of State Antony Blinken spoke on the telephone on Wednesday evening with Cherelle Griner, the wife of the two-time Olympic champion, a senior State Department official said, without giving details on the content of the call.

On Tuesday, the State Department said Griner was unable to speak to her wife over the weekend as scheduled due to a logistical issue that was compounded by Russia’s restrictions on the U.S. embassy’s operations in Moscow.

Forty advocacy groups including the National Organization for Women, Human Rights Campaign and GLAAD said they appreciated the Biden administration’s efforts, which included labeling the 31-year-old “wrongfully detained” in May and assigning diplomats to work for her release.

But they said more needs to be done.

“The U.S. Government has acknowledged that Brittney is essentially a political pawn in classifying her as wrongfully detained,” the groups said in a letter to Biden and Vice President Kamala Harris that was seen by Reuters.

“While these have been critically important measures, we now urge you to make a deal to get Brittney back home to America immediately and safely.”

Adrienne Watson, a spokesperson for the National Security Council, told Reuters that the government is exploring all avenues to secure Griner’s release.

“President Biden has been clear about the need to see all U.S. nationals who are held hostage or wrongfully detained abroad released, including Brittney Griner,” Watson said in an email.

“The U.S. government continues to work aggressively using every available means ” to bring her home.”

One of the brightest stars in the top-flight U.S. women’s professional basketball league, Griner is a WNBA champion, seven-time All-Star and two-time Olympic gold medallist.

Griner has for years played for a Russian professional team during the WNBA off-season to help supplement her income. She is a seven-time Russian League champion.

On Monday, a Kremlin spokesman said Griner was guilty of drug offences and not a hostage.

Inside the fight to save an American cemetery and the…