Buddhist chaplains on the rise in US, offering broad appeal 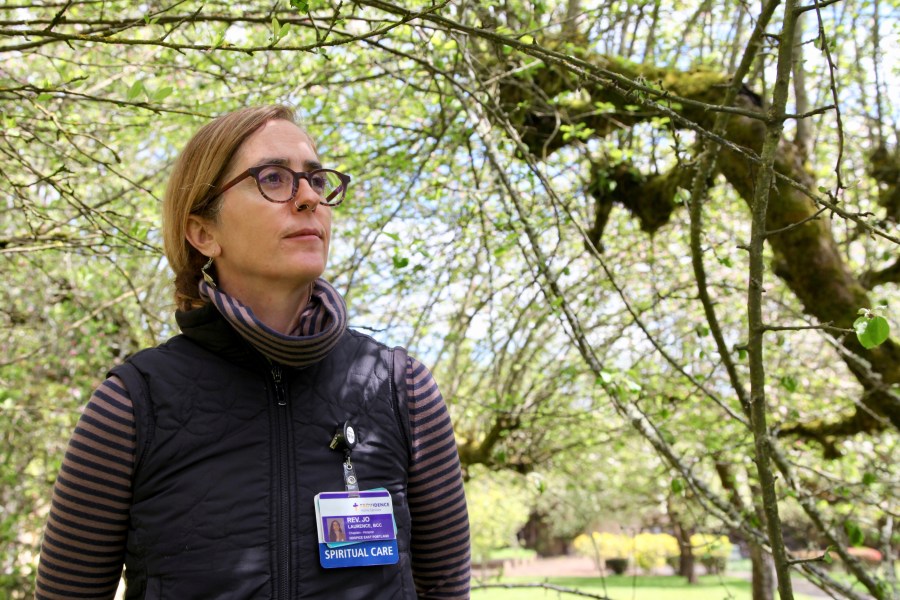 PORTLAND, Ore. (AP) — Wedged into a recliner in the corner of her assisted living apartment in Portland, Skylar Freimann, who has a terminal heart condition and pulmonary illness, anxiously eyed her newly arrived hospital bed on a recent day and worried over how she would maintain independence as she further loses mobility.

There to guide her along the journey was the Rev. Jo Laurence, a hospice and palliative care chaplain. But rather than invoking God or a Christian prayer, she talked of meditation, chanting and other Eastern spiritual traditions: “The body can weigh us down sometimes,” she counseled. “Where is the divine or the sacred in your decline?”

An ordained Sufi minister and practicing Zen Buddhist who brings years of meditation practice and scriptural training to support end-of-life patients, Laurence is part of a burgeoning generation of Buddhist chaplains who are increasingly common in hospitals, hospices and prisons, where the need for their services rose dramatically during the pandemic.

In a profession long dominated in the U.S. by Christian clergy, Buddhists are leading an ever more diverse field that includes Muslim, Hindu, Wiccan and even secular humanist chaplains. Buddhist chaplains say they’re uniquely positioned for the times due to their ability to appeal to a broad cultural and religious spectrum, including the growing number of Americans — roughly one-third — who identify as nonreligious.

In response, study and training opportunities have been established or expanded in recent years. They include the Buddhist Ministry Initiative at Harvard Divinity School and the Buddhism track at Union Theological Seminary, an ecumenical Christian liberal seminary in New York City. Colorado’s Naropa University, a Buddhist-inspired liberal arts college, recently launched a low-residency hybrid degree chaplaincy program. Nonaccredited certifications such as those offered by the New York Zen Center for Contemplative Care or the Upaya Zen Center in Santa Fe, New Mexico, are also popular.

“The programs keep expanding, so it seems clear that there’s a growing demand from students. And the students appear to be finding jobs after graduation,” said Monica Sanford, assistant dean for Multireligious Ministry at Harvard Divinity School and an ordained Buddhist minister.

In the past, Buddhist chaplains were often hired by the likes of hospitals and police departments specifically to minister to Asian immigrant communities. During World War II, they served Japanese American soldiers in the military. Today, however, they are more mainstream.

In a first-of-its-kind report published this month, Sanford and a colleague identified 425 chaplains in the United States, Canada and Mexico representing all major branches of Buddhism, though the researchers say there are likely many more. More than 40% work in health care, the Mapping Buddhist Chaplains in North America report found, while others serve in schools, in prisons or as self-employed counselors.

Two-thirds of respondents reported holding a Master of Divinity, another graduate degree or a chaplaincy certificate. Most of those working as staff chaplains also completed clinical pastoral education internships and residencies in health care and other settings.

Maitripa College, a Tibetan Buddhist college also in Portland, has seen increased interest in its Master of Divinity track since its launch 10 years ago, said Leigh Miller, director of academic and public programs. It appeals to a broad range, from older Buddhists with 20 years of practice to new college graduates who just started meditating, from spiritual seekers to people with multiple religious belongings.

Hospitals and other institutions are eager to hire Buddhist chaplains, Miller said, in part to boost staff diversity and also because they are adept at relating to others using inclusive, neutral language.

“Buddhist chaplains are in the habit of speaking in more universal terms, focusing on compassion, being grounded, feeling at peace,” she said. “A lot of Christian chaplains fall back on God language, leading prayers or reading Bible scriptures.”

Meanwhile, training in mindfulness and meditation, as well as beliefs regarding the nature of self, reality and the impermanence of suffering, give Buddhists unique tools to confront pain and death.

“The fruit of those hours on the (meditation) cushion really shows up in the ability to be present, to drop one’s own personal agenda and to have a kind of awareness of self and other that allows for an interdependent relationship to arise,” Miller said.

Buddhist chaplaincy also faces challenges, including how to become more accessible to Buddhists of color. The Mapping Buddhist Chaplains in North America report found that most professional Buddhist chaplains today are white and have a Christian family background, even though nearly two-thirds of the faith’s followers in the U.S. are Asian American, according to the Pew Research Center.

Traditional Buddhist communities tend to be small and run by volunteers so they often lack the resources to offer endorsements to chaplains — a necessary step for board certification, which is often required for employment.

And non-Christian chaplains can struggle with feelings of isolation and a need to code-switch in Christian-founded health care institutions where crosses hang on walls, prayers are offered at staff meetings and Jesus and the Bible are regularly invoked.

Providence Health & Services, a Catholic nonprofit based in Washington state that runs hospitals in seven Western states, is one Christian health care system seeking to change that.

Mark Thomas, a chief mission officer in Oregon, said the system employs 10 Buddhist chaplains not despite but precisely because of its Catholic identity. The aim is to ensure patients get good spiritual care however it best suits them.

“Many patients resonate with some aspect or even just a perception of Buddhism,” said Thomas, citing practices like meditation and breathing that can help them cope with suffering. “These tools have been enormously valuable.”

Laurence, the hospice chaplain at Portland’s Providence Home and Community Services, grew up in London and felt called to Buddhism after witnessing poverty, violence and racism as a caregiver in Mississippi.

She said that as more people become unchurched, many patients don’t have a language for their spirituality or it’s tied up with religious trauma. Laurence supports them in whatever way they need, be it through Christian prayer, the comfort of a cool washcloth on a forehead or a Buddhist-inspired blessing.

“For some people the language of Buddhism is a respite,” she said. “It doesn’t have the baggage, and it feels so soothing to them.”

Freimann, her patient, said she has practiced Eastern spiritual traditions and therefore was delighted to receive Laurence.

“I don’t think of God the way traditionally religious people do,” Freimann told her during the visit. “What a joy you’re here. … It would be so much harder to talk with a Christian chaplain.”

Associated Press religion coverage receives support through the AP’s collaboration with The Conversation US, with funding from Lilly Endowment Inc. The AP is solely responsible for this content.