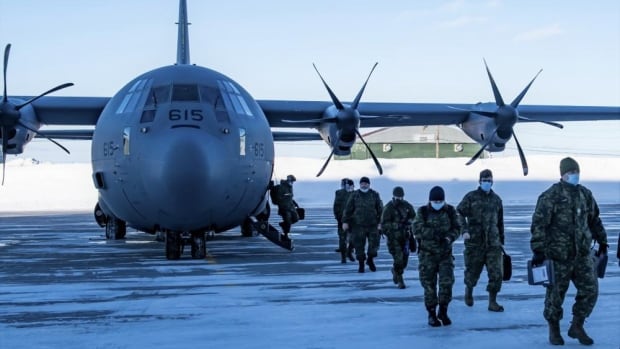 Anand delivered the long-awaited announcement on the NORAD upgrade at the Canadian military’s principal air base at Trenton, Ont.

“NORAD has continually adapted and evolved in response to new threats. Today, we turn another page and begin NORAD’s next chapter,” the minister said in front a backdrop of flags and an aging CF-18 jet fighter.

The figure represents Canada’s share of the cost of overhauling the decades-old joint bi-national air defence command, originally designed to watch out for Soviet bombers. The project was not part of the Liberal government’s 2017 defence policy document.

The United States covers about 60 per cent of the bill for NORAD.

The cash is expected to come out of the latest federal budget, which set aside up to $8 billion in new funding beyond increases in defence appropriations to which the Liberal government already had agreed. Up to $6 billion of that money was earmarked for a variety of commitments, including NORAD modernization.

The nature of NORAD has changed in recent years as it has assumed additional responsibilities for monitoring sea lane approaches to North America and guarding against cyberattacks.

The NORAD overhaul will include the replacement of the North Warning System, a chain of radar stations in the Far North. The system eventually will be replaced with two different types of radar systems — one northern, one polar — that have the ability to look over the horizon.

The overhaul also will deploy new satellites built to track moving targets on the ground and a top-secret series of remote sensors.

The new network will monitor not only the Arctic — NORAD’s traditional domain — but also Pacific and Atlantic approaches to the continent.

Military experts have long warned that NORAD’s current surveillance system is not built to track cruise missiles — weapons fired from submarines or from outside of North American airspace. It’s also not set up to deal with hypersonic missiles, which travel at many times the speed of sound.

Both weapons systems have featured prominently in Russia’s invasion of Ukraine.

“The threat environment has changed,” Anand said, answering a reporter’s question on Monday.

“As our threats evolve, so must our defensive capabilities. And what we aim to do with this announcement today is to ensure that we — across the board — are engaging in the most significant and relevant upgrade to Canadian NORAD capabilities in almost four decades.”

Asked whether Canada will end its prohibition on participating in the U.S. ballistic missile system (BMD), Anand said the government will maintain the current policy of non-involvement.

The chief of defence staff, Gen. Wayne Eyre, provided a more nuanced answer. He said technology and the evolving nature of the threat have moved beyond the nearly two-decade-old political debate over BMD, and there may soon be other ways to knock down incoming missiles.

“We’re seeing technology advance so fast,” Eyre said. “That’s why the R&D component of this this package is super important because we’re going to have to watch the … threats that are out there to be able to ensure that our defences keep pace.”