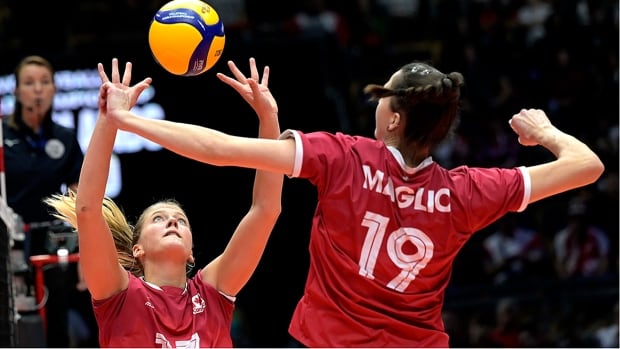 Inconsistent serves, poor service reception and too much Ebrar Karakurt.

That was the Canadian women’s volleyball team’s downfall in its first loss in five matches, a three-set sweep at the hands of Turkey in Phase 2 play on Wednesday at the world championship.

Still, they led the world’s No. 15-ranked squad with 20 and 12 points, respectively, after combining for 49 points in Tuesday’s four-set win over Thailand.

The Canadians, whose record dropped to 1-1 in Phase 2 and 4-3 overall, will be in tough to reach the quarter-finals and likely would need victories over Poland and Dominican Republic on Friday and Saturday — each with three victories overall — to be among the top four squads to advance from their eight-team pool.

Those matches at 2:30 p.m. ET and 1 p.m. will be available live via stream for free on CBCSports.ca, the CBC Sports app and CBC Gem.

“We lacked a little urgency and focus at those key moments,” Canada captain Jen Cross of Scarborough, Ont., told Volleyball Canada. “We made mistakes at important moments and against a great team like them, it just makes it very difficult.

“We don’t have a match [Thursday] so we’re going to take a day to refocus and get ready.”

Canada sits fourth in its pool, holding a slim lead in point ratio over fifth-place Thailand (4-3), which lost 3-1 in sets to Germany on Wednesday.

Turkey, which rode Karakurt’s 26-point performance to victory on Wednesday, avenged a 3-1 sets loss to Canada three months ago in Volleyball Nations League action at the Seven Chiefs Sportsplex in Calgary.

The 22-year-old Karakurt also was strong on that day in late June with 23 points but appeared unstoppable at times Wednesday. She took over the second set with her team trailing 23-21 after Canada lost a net touch challenge.

‘Our passing broke down’

Van Ryk drew the Canadians even but Karakurt helped No. 7 Turkey regain the lead with a hit from the backcourt and Ilkin Aydin blocked Van Ryk at the net.

Earlier in the set, Karakurt displayed a deft touch, softly dropping a shot in front of Gray on the front line. Her block in the third set extended Turkey’s lead to 13-9 and twice she restored a three-point lead at 18-15 and 19-16.

“Our passing broke down,” Canada head coach Shannon Winzer said after the set. “We’re outattacking them, it’s about our first contact [with the ball]. There has to be a restart in this third set.”

Kiera Van Ryk and Alexa Gray will be the key to Canada’s success at the 2022 Women’s Volleyball World Championship in Poland and the Netherlands.

Attack points were even at 44 for the match, while Canada did better in blocking points (7-5), Turkey was the stronger serving team (7-2) and made the most of Canada’s errors.

Captain Eda Erdem had the next highest point total to Karakurt for Turkey with nine, delivering a key spike to put Turkey ahead 23-21 in the final set.

Canada tied the set 24-24 on a Van Ryk ace and block but the 23-year-old from Surrey, B.C., struggled with her serves and directed the ball into the net to give Turkey the lead. Van Ryk responded by knotting matters and the Canadians then went up 26-25 before Aydin scored off a block.

Turkey put its opponent away on a Karakurt kill that eluded Van Ryk and poor service reception by Canada.

In the opening set, neither team built more than a two-point advantage until Van Ryk’s long serve gave Turkey a 23-20 lead.

The Canadians closed to within a point on a Karakurt service error and a point by setter King, but Turkey’s seventh ace of the day – courtesy Hande Baladin – helped put away its opponent.

“The first part of the game we made a lot of service errors and it’s hard to find your rhythm when you struggle from the base line,” she told Volleyball Canada. “It did pick up throughout the game, but also our first contact was difficult tonight and it’s hard to play against one of the best teams in the world when you don’t control that first contact.

“It’s a chance to refocus on the things that we know we are good at and show up for a big game against Poland.”