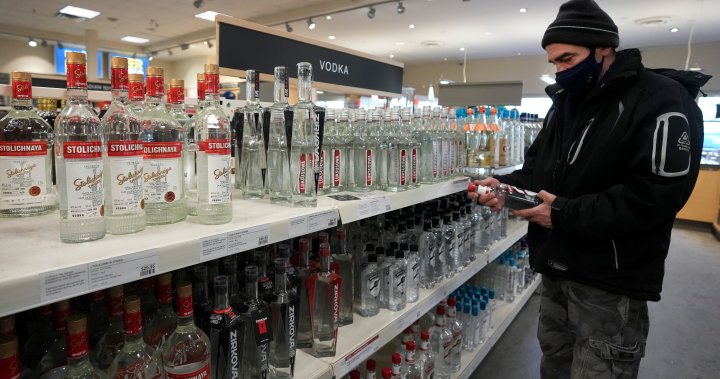 Canadians will see less varieties of Russian alcohol in the country after Ottawa announced Friday it will stop importing those products due to Moscow’s war in Ukraine.

The federal government also said it is slapping sanctions on 14 more individuals including Russian oligarchs, their family members and close associates of President Vladimir Putin.

Ottawa has now imposed sanctions on more than 1,000 individuals and entities from Russia, Ukraine and Belarus since the war began on Feb. 24.

Not only is Canada banning the imports of certain goods from Russia, but Ottawa is cutting off exports to the nation as well.

The federal government is banning the export of targeted luxury goods, including alcoholic beverages, tobacco, some textile products and sportswear, footwear, luxury clothing and accessories, jewelry, kitchenware and art.

“Canada is also banning the importation of targeted luxury goods from Russia, including alcoholic beverages, seafood, fish and non-industrial diamonds,” the government said.

“Together, these categories represented $75.7 million worth of goods in 2021.”

It did not specify which types of products would no longer be imported and exported.

Alcohol bans were imposed by certain provinces shortly after the war began. Ontario, for instance, ordered the LCBO to pull all Russian-made products off its shelves on Feb. 25.

EXCLUSIVE: ‘Wolverines’ of Ukraine step out of shadows

Ottawa’s new bans are intended to align with moves made by its allies to limit the potential for Russian oligarchs to circumvent restrictions in other luxury good markets, the government said.

“The Government of Canada is also implementing a ban on the export of goods that could be used in the production and manufacture of weapons by Russia,” Ottawa said.

“Together, these measures will help maintain further pressure on the Russian regime to cease its unprovoked and unjustifiable invasion of Ukraine.”

In addition to the sanctions, the federal government also announced Friday it is loaning $250 million to Ukraine through the International Monetary Fund’s Administered Account for Ukraine.

“Together with previous financial support, this loan brings Canada’s financial commitment to Ukraine to $1.87 billion this year,” a news release said.

“This funding is separate from and in addition to significant assistance committed through military aid, humanitarian response efforts, and immigration measures.”

Russia’s “special military operation” in Ukraine has dragged on for close to three months and has resulted in the deaths of thousands of people and displacement of millions.