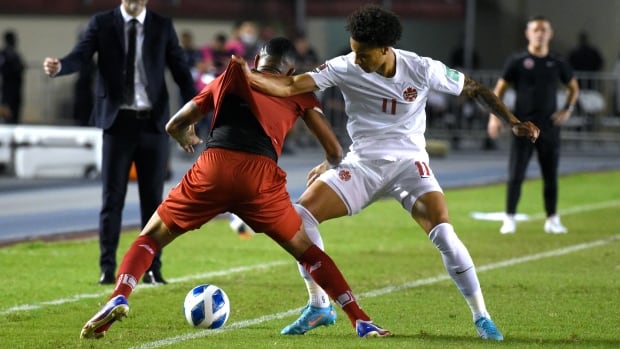 Panama is stepping in as a late replacement for Iran for Sunday’s men’s soccer friendly against Canada in Vancouver.

Giving way to mounting criticism about hosting Iran at B.C. Place Stadium, Canada Soccer announced last Thursday it was cancelling the planned friendly while acknowledging “we will strive to do better moving forward.” The governing body has been looking for a replacement opponent ever since, knowing the June international window is just one of two FIFA breaks before the World Cup kicks off in November.

Players on Canada’s men’s soccer team raised concerns about a controversial friendly match against Iran — and Canada Soccer confirms that pushback factored into its sudden decision to cancel the event.

“Canada Soccer heard those private concerns and took them into consideration as part of the decision-making process,” wrote Canada Soccer in a media statement. The organization also said it hasn’t paid any fees to Iran’s team.

Officials at Canada Soccer have cancelled an exhibition game against Iran’s team that was scheduled for Vancouver in June, saying it’s become ‘significantly divisive’ after families of the victims in Flight PS752’s downing urged the organization to call off the match.

Iranian officials had told state-affiliated media that Canada Soccer would pay them $400,000 for the exhibition game, which reportedly would have allowed Iran’s team to turn a profit off a friendly match for the first time in more than two decades.

Now, the Iranian soccer team says it will pursue damages through FIFA from Canada Soccer for cancelling the game. Iran’s deputy minister of sport announced the team is seeking $10 million in penalties.

Panama is ranked 61st in the world, 40 places below Iran. Like No. 38 Canada, it had to go through two rounds of qualifying just to reach the final stage in CONCACAF.

Panama was an early surprise in the final round of World Cup qualifying, losing just one of its first five matches (2-1-2) while tying Mexico and beating the U.S. It then ran into Canada, losing 4-1 at Toronto’s BMO Field last October.

A late surge allowed Costa Rica to move past Panama into fourth spot when the qualifying round was complete, sending the Costa Ricans into a qualifying playoff with New Zealand later this month in Doha. Panama (6-5-3) finished fifth, four points behind Costa Rica (7-3-4)