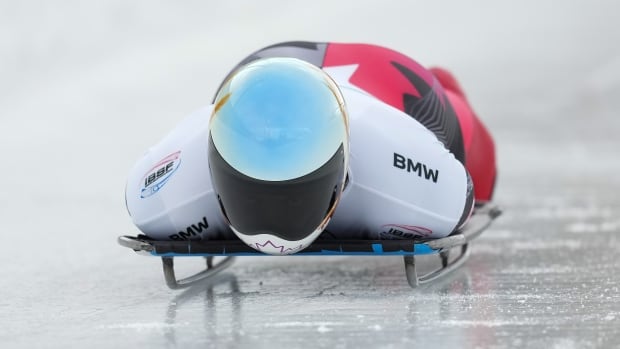 “It feels cool to have the new generation come in [to the sport],” said Enzie, who competed in three World Cup events last year. “It’s really nice to be here, finally.”

The young Canadian got off to a solid start, posting a time of 53.59 seconds in his first of two heats. When he got back up to the start line, he was surprised to see his name still hovering among the leaders.

“I was like `I’ve never been here before. Playing with the big dogs today.’ But hopefully I’ll keep it going for the rest of the season,” Enzie said with a smile.

Great Britain’s Marcus Wyatt finished the race with a time of one minute, 45.44 seconds to capture his first World Cup gold. He was just 0.01 seconds ahead of South Korea’s Seunggi Jung.

Both Wyatt and Weston got off to a blistering 4.46 second start on their second heat of the day, setting a new start record at the Whistler Sliding Centre.

Great Britain’s Marcus Wyatt claimed gold at the opening World Cup skeleton event of the year in Whistler, B.C. with the winning time of 1.45:44.

“I felt pretty fast. I was a little bit nervous, a bit of extra adrenalin in the legs,” Wyatt said.

The duo take the record from a familiar face — their performance coach, Martins Dukurs, a Latvian skeleton legend who joined the British team in August.

“They bring a kind of perfection that a lot of teams only dream of,” he said.

Hannah Neise of Germany slid to gold in the women’s competition with a time of 1:47.40. The 22-year-old took top prize at the Beijing Olympics in February, but Thursday marked her first World Cup win.

“I just see the Olympics as one race, as it’s own [race]. I just wanted to try and be better this year in the World Cup,” Neise said. “But I wouldn’t think it would start like this.”

Making her World Cup debut, American Hallie Clarke wowed many, leading for the entire first heat and finishing the day in second spot, 0.18 seconds behind Neise. The 18-year-old dual citizen is based in Calgary and raced for Canada before switching to the Stars and Stripes this season.

Germany’s Francesco Friedrich will be in British Columbia for the opening event of the IBSF World Cup season as Whistler welcomes the world’s best skeleton and bobsleigh athletes for the first time in over three years.

Mirela Rahneva of Calgary was the top Canadian in the women’s field, coming in seventh, while North Vancouver’s Jane Channell placed eighth after a difficult second heat.

“Honestly, mechanically, it was awful,” Channell said of the start. “I was really hoping for a faster one on run two.”

Thursday marked the first time Whistler has held a skeleton World Cup since 2019, and the Canadian athletes embraced being able to race on home soil once again.

“It feels really, really good to be back here. It’s been way too long,” said Channell, who wasn’t on Team Canada when Whistler hosted the world championships in 2019.

“To be back on the squad, on my home track with some of my friends and family out, post-COVID, is really, really special.”

Competition continues Friday on CBCSports.ca, CBC Gem and the CBC Sports app for iOS and Android at 1 p.m. ET with the women’s monobob and two-man bobsled events. Saturday will feature the two-woman bobsled and four-man bobsled beginning at 1 p.m. ET.