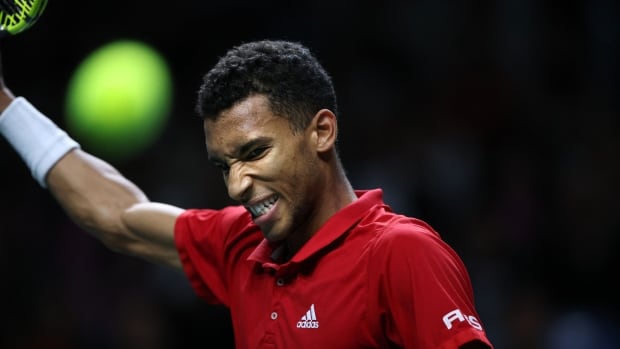 This is an excerpt from The Buzzer, which is CBC Sports’ daily email newsletter. Stay up to speed on what’s happening in sports by subscribing here.

Canada’s victory over Australia on Sunday to capture its first Davis Cup title punctuated another big year for Canadian tennis. Though the country is still looking for its first Grand Slam singles champion since Bianca Andreescu’s historic win at the 2019 U.S. Open, Canada continued to establish its bona fides as a rising tennis nation in 2022. Here are some of the takeaways:

A more precise way of saying this was a big year for Canadian tennis would be to say this was a big year for Felix. The young Quebecer, who turned 22 over the summer, entered the season as a promising talent who had made a couple of nice Slam runs in 2021 but couldn’t seem to win the big one. He was 0-8 in singles tournament finals.

That changed quickly as Auger-Aliassime won a pretty competitive tournament in Rotterdam in February by beating then No. 7 Andrey Rublev in the semifinals and No. 4 Stefanos Tsitsipas in the final for his first ATP Tour title. Felix almost made it two in a row the following week, losing to Rublev in the final in Marseille, France, before winning an incredible three straight tournaments in Europe in October. The competition at the first two was weak (Felix didn’t face anyone ranked in the top 25) but he silenced any doubters the next week in Switzerland by upsetting world No. 1 Carlos Alcaraz en route to his fourth title of the year.

The streak finally ended the following week at a tougher Masters-level event in Paris, but Auger-Aliassime’s semifinal appearance was enough to qualify him for the season-ending ATP Finals for the first time. Though he failed to get out of the group stage at the lucrative event in Italy, which is reserved for the top eight players, Auger-Aliassime beat 22-time Grand Slam champion Rafael Nadal and pocketed north of $700,000 US to bring his 2022 winnings above $4 million and finish the individual season ranked a career-high sixth.

In addition to his solo success, Auger-Aliassime was the star of Canada’s Davis Cup run. His upset of Alcaraz in the group stage (Felix is now 3-0 vs. the Spanish phenom) was crucial to Canada’s advancing, and Auger-Aliassime was even better in the knockout rounds. He mowed through his three singles opponents without dropping a set and also teamed with Vasek Pospisil to win the deciding doubles match in Canada’s semifinal victory over Italy.

The Davis Cup victory was actually the second international team trophy for Auger-Aliassime this year. Way back in early January, he and Denis Shapovalov earned singles wins to defeat Spain (sans Alcaraz) in the final of the short-lived ATP Cup.

Shapovalov had a so-so year, ending up ranked 18th after starting at No. 14. At one point, he lost six consecutive matches, but he rebounded to reach a couple of finals in the fall and delivered a singles win for Canada in the Davis Cup championship matchup vs. Australia.

There’s good depth on the women’s side too.

Leylah Fernandez didn’t really build on her breakthrough 2021, which featured a surprising run to the U.S. Open final. But the 20-year-old still made the quarter-finals at the French Open, won the low-tier Monterrey Open in Mexico for the second straight year and reached a career-high 13th in the rankings in August before finishing the year 40th. A foot injury suffered in her French Open loss caused Fernandez to miss Wimbledon and she didn’t do much after returning, losing more matches than she won over the remainder of the season.

Andreescu finished the year ranked 45th — almost exactly where she started. But that was a step forward from a horrible 2021 marred by COVID-19 infections and mental-health struggles that led to her taking a break from tennis. She didn’t compete this year until April, causing her world ranking to dip to 121st — a far cry from the No. 4 high she reached in 2019 when she won Indian Wells, the Rogers Cup in Toronto and the U.S. Open.

With Fernandez, Andreescu and doubles ace Gaby Dabrowski (ranked seventh after capturing three titles this season with non-Canadian teammates), Canada has a lineup that can contend in international team events. Those three beat Italy in the group stage of the 12-team Billie Jean King Cup Finals this month before being eliminated with a loss to eventual champion Switzerland.

Atop the wish list for Canada’s tennis players in 2023 is some better showings in the Grand Slams. Victories in mid-tier events and even the Davis Cup are great, but players are ultimately judged on their performances in the big four tournaments. Canadians did not fare well in them this year, with no one getting past the quarter-finals (Auger-Aliassime, Shapovalov, Fernandez and Dabrowski each reached that stage once).

After a month off, the quest for major success resumes in early January with tuneup events for the Australian Open. The first Grand Slam of 2023 begins Jan. 16 in Melbourne. Read more about Canada’s “milestone” Davis Cup victory here.

US-Iran match reflects a regional rivalry for many Arab fans