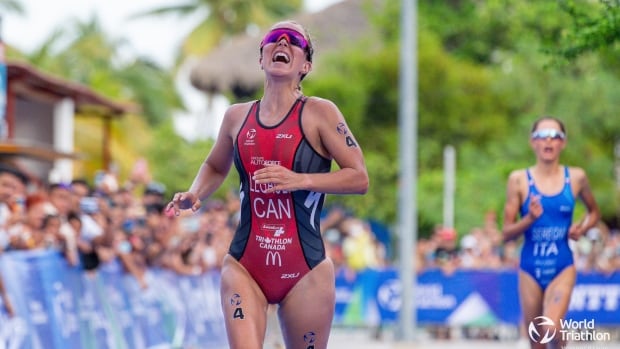 The L’Île Perrot, Que., native finished with an overall time of one hour, 13 seconds.

“This feels quite amazing. At first I couldn’t believe it, but it is starting to soak in now so I’m pretty happy,” said the 26-year-old Canadian.

Legault, Canada’s top-ranked women’s triathlete, was 10th following the 750-metre swim and 30 seconds behind the lead pace coming out of the first transition.

Working her way into the top four on the opening lap of the 20-kilometre bike course, the race quickly turned into a very tightly-contested one going into the second transition.

“On the bike it was just about staying safe. We had a lot in the front pack, people were moving sideways a lot, so I tried to stay towards the front without spending too much energy, which played out well,” said Legault, who was one of six riders to enter the second transition together, with 28 athletes within eight seconds of the lead.

“When I hit T2 at the front, I just tried to run as hard as I could at the beginning and see what I could get.”

In the final portion of the race, the 5km run, Legault was neck-and-neck with Koch, even taking the lead heading into the second lap. But Koch was able to pull away on the final lap to take her first World Cup gold medal.

“I was trying so hard at the end. I thought I was going to get passed because I had nothing left,” Legault said. “I am very happy.”

Legault finished 14th at the event just a year ago in Mexico.