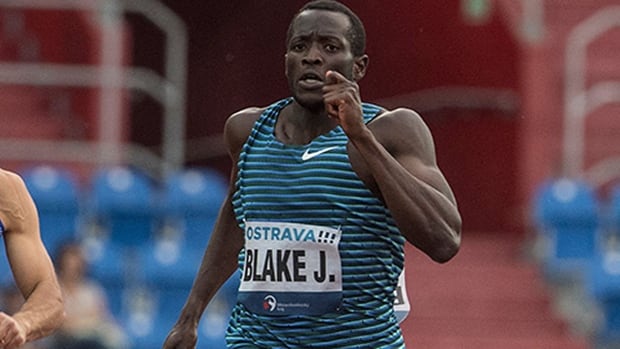 Jerome Blake of Kelowna, B.C., surged down the straightaway to edge American Elijah Hall at the finish line in a winning time of 20.14 seconds in the men’s 200 metres at the 61st Ostrava Golden Spike track and field meet on Tuesday in the Czech Republic.

Blake’s performance into a slight headwind on a comfortable evening was slightly faster than his wind-assisted 20.25 at the Diamond League season opener earlier this month in Doha, Qatar, where he was sixth, and a bit slower than his fourth-place season and personal best of 20.04 on April 16 at the USATF Golden Games in Walnut, Calif.

It was the also the 26-year-old’s first victory in a 200 final since July 7, 2019 at the BC Athletics Championship Jamboree in Kelowna.

Blake, who was born in Buff Bay, Jamaica and relocated with his family to the Okanagan region in B.C. a few years ago, is scheduled to race his fourth 200 of the season at this Sunday’s Diamond League meet in Rabat, Morocco.

Rodney, who was the only athlete in Tuesday’s eight-man field with a sub-20-second PB (19.96), clocked a 10.20 SB in a 100 B race earlier in the day at the World Athletics Continental Tour Gold event.

WATCH | Blake ‘still growing as an athlete and person’:

Jerome Blake always had potential, but moving to Canada made him an Olympian

Growing up in Jamaica, Blake joked that he would run for Canada one day. After making the move to Kelowna, B.C., he was spotted by a coach who encouraged him to take sprinting seriously.

Elsewhere, Reece Prescod became the first European man to break 10 seconds in the 100 this season, clocking 9.93.

Prescod showed blistering pace over the last 20 metres to surge ahead of Jamaica’s Yohan Blake, a second cousin of Jerome Blake, and deliver a PB despite running into a headwind. Yohan Blake was second in 10.05.

Small-scale possession of illicit drugs will be decriminalized in B.C. starting next year: federal government

Riyad Mahrez will not play for Man City until he improves his physical condition,…